Mystery of Crater Rays Solved Thanks To Sandbox Play 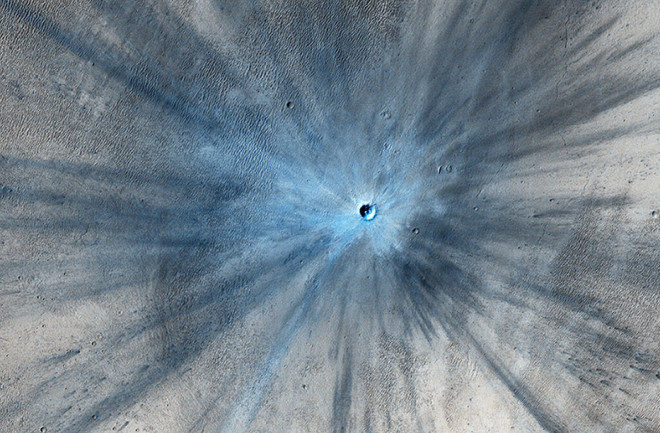 This spectacular impact crater on Mars, imaged by HiRISE on the Mars Reconnaissance Orbiter, spans 100 feet (30 meters) and shows a clear system of rays in enhanced color.(Credit: NASA/JPL-Caltech/Univ. of Arizona) Fiery chunks of rock are constantly bombarding the planetary bodies of our solar system, leaving behind long-lasting scars. These gouges, in the form of craters, can be used to learn about the history of our little nook in the vast universe, prompting scientists to feverishly study their features. Yet one pattern commonly found around craters has remained a puzzle. Sometimes, these craters contain radial rays of debris fanned out around the impact zone. In the lab, scientists have tried to reproduce these patterns by dropping balls into containers of sand or beads, yet have found little success. But in a recent study published June 27 in the journal

, a team of scientists finally made some progress in understanding how crater rays form, and their inspiration comes from an unexpected source: high school students. Tapan Sabuwala of the Okinawa Institute of Science and Technology Graduate University was scouring the internet for videos by other researchers, hoping to find someone who was producing crater rays in sandbox experiments. Although none of the experts were achieving such a pattern, Sabuwala chanced across a video where high school students were producing the elegant rays. “I was very excited to see evidence that ray-like patterns are actually produced in experiments that, at least at first sight, look very similar to the ones that we had been conducting,” says Sabuwala. “And, of course, this fact made it equally confusing as to why the rays are produced in the students’ experiments but not in our experiments.”

The reason why the students were successful, it turns out, is that they were not “priming” the sandbox — smoothing the granular surface before letting their balls drop. Instead, they were starting with an uneven surface – one that more accurately reflects the natural landscapes of planets and moons. After realizing this, Sabuwala and his team got to work, conducting more experiments but this time starting with an uneven surface. Using this approach, they finally gained critical insights into how crater rays are produced. The straightforwardness of the model is surprising, says Sabuwala. “The model is simply a matter of geometry and requires no information about details like the material of the ball or the surface, or the speed of the ball or any other detail. This gives us a new and easy way to estimate the size of the impactor that formed a rayed crater.” In simulations, Sabuwala and his team analyzed how the grains of sand are ejected from the surface on impact. Their results suggest that crater rays are formed due to the shockwave generated when the ball (representing a meteorite) strikes the surface. If the surface is initially smooth, this creates a similarly smooth shockwave that disperses the ejected grains evenly — no rays. But with an uneven surface, this shockwave becomes asymmetrical, causing the ejecta to clump in some areas and form rays that splay out from the impact zone. In particular, the rays form where the ball intersects with the edge of a dip in the surface (in the case of planets or moons, the edge of a valley).

With these new insights, the team was able to preemptively predict how many rays will form based on the initial layout of the surface before impact. As well, they could trace individual rays back to their source after impact. John de Bruyn, an experimental physicist at Western University who studies granular flow, notes that crater formation is a complicated process, whereby a great many different things happen in a short period of time. “It is difficult to study, partly because we can’t directly observe or study impact craters in the process of forming. All we have to work with is what is left behind, many millions of years after the actual event,” he explains. de Bruyn says that, although further experiments and simulations are needed to confirm whether the observations by Sabuwala and his team truly reflect the process that occurs as craters form, the data do appear convincing. “Their results also suggest that crater rays have information about the sizes of the rocks that hit the Moon to form the craters,” de Bruyn says. “If we can extract that information, then I could imagine very exciting things – knowing more about the size of the rocks that were hitting the Moon four billion years ago would give us a lot of information about how our solar system formed and what it was like in its early years.” Overall, the team gained a lot of insight from young students simply experimenting in their sandboxes. One lesson learned, perhaps, is that the meticulous setups in laboratories can be too “neat.” “We are surprised by the results of the haphazard experiments, but not by the fact that our inspiration comes from students,” Sabuwala says. “It only emphasizes that there are many intriguing scientific phenomena all around us and we just need a keen sense of curiosity to discover them.” This story originally appeared on Astronomy.com.