Mysterious Dark Patches in Venus’ Clouds are Affecting the Weather There 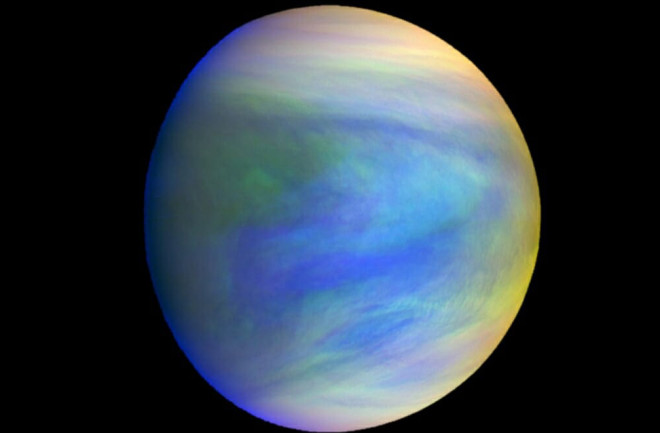 Something mysterious swirls amidst the clouds of Venus.

No one has yet determined what these dark patches are, but scientists have speculated that they might be forms of sulfur, ferric chloride or even microscopic life.

Now, a team of scientists led by Yeon Joo Lee, a researcher in the Center for Astronomy and Astrophysics at the Technical University of Berlin, has shown that the unknown absorbers are affecting Venus’s weather.

On Venus, as on Earth, the energy that drives the atmosphere’s winds comes from the Sun. By studying more than a decade of data from Venus Express, Akatsuki, Messenger and the Hubble Space Telescope, the researchers found a relationship between Venus’ clouds and its winds. The clouds absorb solar radiation, which causes temperature changes that affect wind patterns. The unknown absorbers seem to play a role in this process by affecting the planet’s albedo, or how much energy is reflected back to space.

“It is hard to conceive of what would cause a change in the albedo without a change in the absorbers,” said Sanjay Limaye, a planetary scientist at the University of Wisconsin-Madison and paper co-author.

In part because it is difficult to explain the absorbers’ changes inorganically, Limaye has explored the possibility that they might be microorganisms. He’s in good company. The idea of life in the Venusian atmosphere dates back to a 1967 paper co-authored by Carl Sagan.

Limaye observed that the particles making up the dark patches in Venus’s clouds resemble microorganisms in Earth’s atmosphere. “Since there are few species which have physical, chemical and spectral properties that are consistent with the composition of the Venus clouds, they may have evolved independently on Venus.”

He pointed to the possibility that liquid water may have survived on Venus for as long as two billion years, while at the same time volcanoes erupted and hydrothermal vents may have existed. “If similar conditions elsewhere led to the evolution of life, why not on Venus?” Limaye said.

But the extraterrestrial explanation remains just one possibility.

Emilie Royer, a research scientist at the Planetary Science Institute who was not involved in the study, said that no proposed theory about the absorbers has yet fully explained them. “This new result is very important because every piece of information we obtain from atmospheric levels from the upper clouds and above will help resolve the enigma” of the planet’s mysterious atmosphere, she says.

To further unlock the mysteries of Venusian weather, Limaye says, scientists will need constant, systematic monitoring of the planet’s cloud cover over multiple 11-year solar cycles. He also suggests aerial platforms that can sample Venus’s cloud layer, search for bio-signatures and take other measurements. “Understanding the nature of the absorbers on Venus is the key,” he says.

The study was published August 26 in The Astronomical Journal.

Editor’s Note: This story has been corrected from an earlier version. Carl Sagan proposed life could exist in Venus’ clouds in 1967.