My Second Week in China - Beijing

A few days ago I promised I'd report on my second week in China, so here goes. On Saturday the 21st, we flew to Beijing and checked into the Jade Palace Hotel, near the Institute for Theoretical Physics, at the Chinese Academy of Sciences. The same evening, my good friend Teri Weaver arrived from Seoul. I've written about Teri before over on Orange Quark. She is a journalist, working for Stars and Stripes, the military newspaper, and she has recently returned from a two-month tour in Iraq. On Sunday, Teri and I spent some time wandering around, shopping in Beijing (OK, we also had mojitos at the Hyatt), and then went to see Tiananmen Square. In one sense, Tiananmen really isn't much to see - it's just a very large square, full of vendors trying to sell people the tackiest possible souvenirs of the square and of the upcoming 2008 Olympic games, which are to be held in Beijing. Obviously, though, one doesn't go to Tiananmen to marvel at either its geometry or its tackiness. Standing on one of the most famous spots in modern political history is a fascinating experience - the 1989 image of that lone student facing down a tank is inked into most of our memories. Afterwards, Teri went off to see the Forbidden City, and I went to a dinner arranged for us by the symposium organizers. On Monday the International Symposium on Particle Physics, Astrophysics and Cosmology began. The format was that there were to be talks each morning and afternoon. The invited international participants gave 45-minute talks, and a collection of local physicists gave talks that were around 30 minutes long. My talk was the final one, so I got to thank the organizers on behalf of the international participants before getting down to business. I spoke on Connecting Cosmology and Fundamental Physics. The point I wanted to get across concerns the synergy between cosmological measures of the universe, which provide us with a precision accounting of the sources of energy density in the universe, and microphysical experiments performed here on Earth, with which we hope to identify how these sources fit into our greater understanding of particle physics. The connections are many, with the tightest one being to the search for dark matter, as I've discussed before. There is overwhelming evidence that the universe contains matter of a type other than that which we see forming galaxies, stars, planets and us (called baryons). In fact, the evidence shows that there is five times more of this so-called dark matter in the universe than there are baryons. It is observed indirectly through many different cosmological methods and, indeed, is the reason that galaxies are able to form the way they do. However, so far we have not been able to determine what the particles that make up the dark matter are. There is a good reason for this. The reason the dark matter is not seen glowing along with much of the rest of the material in galaxies is that it does not experience electromagnetism, the force of nature that leads to light. We think that dark matter particles must be only weakly interacting (electromagnetism is quite a strong force) and a consequence of this is that it is hard to get them to do anything measurable to material on Earth in order to betray their presence. There are two ways to get around this. One is to build very sensitive detectors to measure even the smallest effects of dark matter on normal matter, since there should be lots passing through the Earth all the time as our solar system orbits the galaxy. There are many people devoted to these efforts and there are reasons to think that success is lurking in the not too distant future. The second way is, rather than waiting for cosmological dark matter to hit something in your detector, to smash particles together hard enough to create some of it all for yourself. If one can do this, then one would be able to measure its properties (its mass and the strengths of its interactions) and study how it fits into the overall structure of particle physics. This is where our colliders are indispensable. There are other important connections of course, notably to attempts to identify the mechanism responsible for generating the asymmetry between the amount of matter in the universe and the amount of antimatter, as I've written about before. I talked about these also, but in a little less details. Every evening our hosts had some elaborate banquet, or a wonderful outing, or both planned for us. Last Tuesday we were treated to a visit to two small private performances of Chinese opera. The first performance was of the 600-year old Kunqu Opera, which we were told is one of the oldest operatic forms in China. This really was fantastic, as much for the remarkable acrobatic dance and fight scenes as for the vocals themselves. I took a lot of photos (we were told this was allowed) but it was hard to get one that did justice to the show. 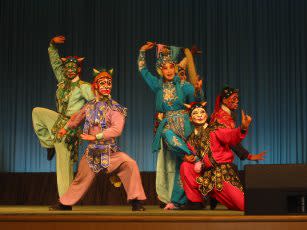 The second form was Beijing opera and was not acrobatic at all, but featured delicate and subtle vocals, entirely unlike those encountered in western opera. Thursday was very different from the other days. In the morning, rather than having talks, there were two panel discussions - one by theorists and one by experimentalists. The purpose was to speak simultaneously to the students and faculty in the audience and also to one of the funding officials who joined us for the discussion and who I assume is responsible for some of the growth in cosmology that China is planning. I sat on the theory panel (obviously), with Alan Guth, Andrei Linde, Ira Wasserman, Henry Tye and Bing-Lin Young. We gave five-minute presentations of our views of the future of cosmology and areas in which China might get involved and make a difference, and then discussed among ourselves and took questions from the audience. I spoke about the connections between particle physics and cosmology and for the need for students to get plenty of exposure to experimentalists and observers as well as theorists if they are to learn and understand what the important questions are. Everything went fine, but I liked one exchange in particular. I don't quite remember the question, but it was by a student and was along the lines of how best to go about connecting string theory and cosmology. Renata Kallosh, who wasn't on the panel because she'd chosen to give her time to Andrei Linde, was in the audience and, since this had been partly the topic of her talk earlier in the week, we asked her to give a response. One could imagine a long and complicated answer to this question, but Renata simply said (as best I can recall, anyway)

which was a lovely answer which earned a round of applause. Thursday afternoon we went to the Great Wall (the section at Badaling). Once we got past the amazingly tacky parking lot, in which there are huge stalls set out with people trying to sell you every conceivable type of souvenir, we climbed one part of the wall. It was spectacular, both in the scope of the project itself, and the views one gets from it. 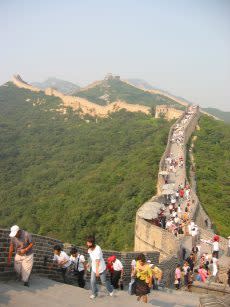 Friday, after my talk and the concluding remarks by Henry Tye, we were taken to the airport and left on a twelve-hour flight over the North Pole to Chicago and back to Syracuse. My China trip was great. I saw part of a country I'd never traveled to before, saw Tiananmen, the Great Wall, Chinese opera and the thousand Island Lake, and was treated graciously and generously by wonderful hosts. Most importantly, I met a bunch of new people, who are fascinated by cosmology and who want to invest in it. Given the pace of change in China, if this initiative moves forward there is no reason the country could not become a major contributor in cosmology within the next decade. I certainly feel privileged to have been part of the attempt to get such an initiative off the ground, and expect I'll be going back to China multiple times in coming years.