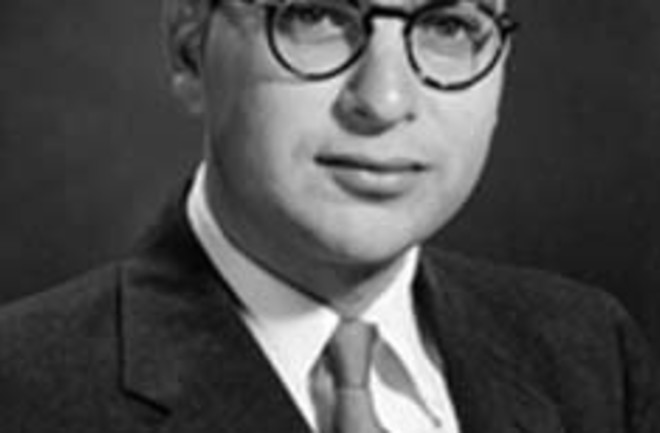 Credit line: Harvey of Pasadena, courtesy AIP Emilio Segre Visual Archives, Physics Today Collection Long ago when I was working as a police reporter at the Albuquerque Journal, my best friend Richard Freedman called to deliver some exciting news: Murray Gell-Mann was giving a public lecture that evening up in Los Alamos, the city high in the Jemez Mountains where the atomic bomb was devised. Having made less than optimal use of our undergraduate education, Richard and I were studying new subjects like mad. Physics, philosophy, linear algebra -- we were sure that somewhere therein lay the secret of the universe. In school I hadn’t got past Physics 101 and an introduction to western philosophy. But throughout those years I had fallen in love with the literature of science-- books like George Gamow's Thirty Years That Shook Physics, Arthur Eddington's The Nature of the Physical World, and The Universe and Dr. Einstein, Lincoln Barnett's wonderful treatment of special and general relativity. I knew that the basic constituents of matter were quarks and that the man who had discovered them was Gell-Mann. It would have been wonderful to see this visionary in person -- perhaps the greatest genius of the atomic age. (He would have looked much as he does in the picture at the top of this post.) But I was working the nightshift at the newspaper, and Los Alamos was a slow, 100-mile drive. For a combination of bad reasons, including inertia, I passed the opportunity by. When I finally met Gell-Mann, approximately 15 years later, we got off to a bad start. By now I was working at the New York Times and I took a year’s leave of absence to move to Santa Fe and write Fire in the Mind. I was starting to spend time at the Santa Fe Institute, which was devoted to the emerging (and still emerging) sciences of complexity and where Gell-Mann was one of the most prominent thinkers. It was only a matter of time before our paths crossed. The opportunity came one afternoon at Sol y Sombra, a magnificent estate on the outskirts of town that was occupied by Georgia O’Keefe in her dying days and, last I heard, is owned by Microsoft billionaire Paul Allen. The institute was holding a conference on the lush, rolling grounds. (Sol y Sombra means sun and shade.) I walked into the meeting room and spotted Gell-Mann at the seminar table -- "his full head of tightly packed white hair, his styleless glasses with black plastic frames." That description is from the prologue of the biography I would later write: Strange Beauty: Murray Gell-Mann and the Revolution in 20th-Century Physics. The scene continues:

He was wearing a turquoise bolo tie and a jacket with an emblem for the Nature Conservancy, one of the environmental organizations he champions. The field of complexity is intimately related to the phenomenon called chaos, and Murray was loudly complaining about a popular book on the subject written by my former New York Times colleague James Gleick. I had admired Chaos immensely and was a little shocked when Murray began to denounce "this Gleick person," as he called him, for supposedly undermining the public's understanding of science. And Gleick's biography of Feynman made Murray livid. He conceded that Jim's book was beautifully written, but that somehow just made it worse. (Later Murray met Jim's brother, a scientist, who was visiting the Santa Fe Institute. They hit it off well, and from then on, Murray called him "the good Gleick.") When the meeting broke for lunch, I carried my plate to one of the long wooden tables and sat down. I felt a mild adrenaline jolt when I saw Gell-Mann walk in my direction and, quite by accident, sit down across from me. He put out his hand and said in his deep, nasal voice, "Hi. I'm Murray Gell-Mann." I apprehensively introduced myself as an editor for The New York Times. "Oh, The Times," he said, smiling with amusement. "That's the place that employs that -- what is his name? -- that Wilford person." It seems that John Noble Wilford, the dean of American science journalism, had once written a story that Gell-Mann didn't like. In the mid 1980s, some scientists at Purdue University were arguing that Galileo had got it wrong: A feather and a brick dropped inside a vacuum would not land simultaneously after all. A fifth force of nature -- beyond gravity, electromagnetism, and the strong and weak nuclear forces -- would cause some objects to accelerate faster than others. Wilford had called Gell-Mann to ask his opinion of what might conceivably have been a monumental discovery. After subjecting Wilford to a five- or ten-minute oration on everything that was wrong with science-writing today, Gell-Mann tried to dissuade him from writing the piece. No one had heard of these scientists, Murray told him. Their analysis was shaky and would doubtlessly turn out wrong. As I listened to Gell-Mann tell the story, I could empathize with the frustration Wilford must have felt. Right or wrong, the fact that some card-carrying physicists were publishing this theory -- now long forgotten -- in Physical Review Letters was certainly newsworthy. Getting a quote from Gell-Mann would help put the story in perspective. I could imagine the clock ticking above Wilford's head, the deadline approaching, and Gell-Mann stubbornly refusing to cooperate. Looking for a good quote, Wilford apparently did what any of us might have done: he asked a leading question, something like, "Well, if the theory does turn out to be right, would it be important?" "Well, yeah, of course," Murray had replied. He was appalled to read the next morning on the front page of The Times that "Dr. Murray Gell-Mann, a theoretical physicist at the California Institute of Technology, said that if the conclusions of the study were correct, it was fair to speculate on the existence of a fifth force. . . ." Never mind that Wilford had taken all the care in the world to point out in his story how very tentative the research was. This had happened six years before, and Gell-Mann was not about to forgive him. The story, given just the right spin by Gell-Mann, set off a round of laughter at the lunch table, which had filled with other physicists. I could see that it was going to be open season on science writers. And Gell-Mann was on a roll. "Things used to be worse," he said. He told about another science writer, a two-time winner of the Pulitzer Prize, who infuriated him by refusing to believe in the existence of the famously elusive particle called the neutrino. He was, Gell-Mann declared, "a man of impenetrable stupidity unmatched even by science writers today." This was getting to be a bit much. I had heard that Gell-Mann, the perfectionist and procrastinator, was having a huge amount of difficulty trying to write his own book, The Quark and the Jaguar, explaining complexity to a general audience. The manuscript was late and the publisher was ready to demand that he return his rather considerable advance. I couldn't resist. "How is your book coming along?" I asked. "Umm. Not very well," he admitted. He turned away and began talking to some physicists about string theory.

Last night I read in Sean Carroll’s blog, Preposterous Universe, that Gell-Mann was honored this week at Caltech on the 50th anniversary (which is early next month) of the paper that introduced the quark. As with almost anything involving Murray (as almost everyone comes to call him), there is a story behind that paper, which I will tell, among others, in a forthcoming post. My initial encounter with the man -- one of the first Nobelists I had met -- turned out to have a happier ending. A few weeks later I was invited to a Halloween party at the small house Seth Lloyd, one of Murray’s former students, was renting while visiting SFI. We were sitting in the floor carving jack-o'-lanterns when Gell-Mann sat down next to me.

"You know, I'm finding that this book-writing business isn't as easy as it looks," he said a little sheepishly. I took it as a touching concession, and before I knew it he was giving me chapters of his manuscript to read.

About a year after that I decided, to his great consternation, to write his biography. Part 2: The Terror of Error Part 3: An Idea as Grand as the Ritz