Music Was Better in the Sixties, Man

Actually, popular music is arguably "better" today. But in the Sixties it was more creative -- or at least more experimental. So says science. (Via Kevin Drum.) 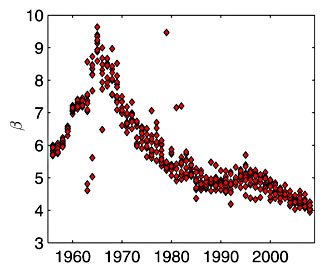 The science under consideration was carried out by a group of Spanish scientists led by Joan Serrà, and appeared in Scientific Reports, an open-access journal published by Nature. They looked at something called the Million Song Dataset, which is pretty amazing in its own right. The MSD collects data from over a million songs recorded since 1955, including tempo and volume and some information about the pitches of the actual notes (seems unclear to me exactly how detailed this data is). And the answer is ... popular music is in many ways unchanged over the years. The basic frequencies of different notes and so forth haven't changed that much. But in certain crucial ways they have: in particular, they've become more homogeneous. This chart shows "timbral variety" over the years -- a way of measuring how diverse the different kinds of sounds appearing in songs are. Nobody should really be surprised that the late 1960's was the peak of different kinds of instrumentation being used in pop music. On the other hand, one could I suppose argue that this is because back then we didn't know how to do it right, and there was a lot of experimental crap, whereas we've now figured it out. I suppose. On the other hand, songs have gotten louder! So you get more volume for your money.