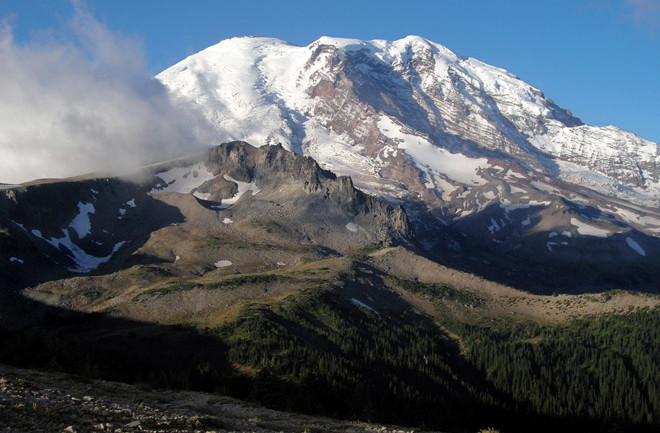 Sometimes, I am quite amused at what passes off as newsworthy these days. I haven't really seen much in the major American news outlets about the eruption going on at El Hierro in the Canary Islands (Spanish), yet for some reasons there are multiple reports of a "spate of earthquakes" at Washington's Rainier. Now, I do understand that amongst the Cascade volcanoes, none strikes as much media frenzy fear as a potential eruption of Mt. Rainier, with its proximity to Tacoma and Seattle. However, why exactly these earthquake made the news is a little baffling to me. Here is what was reported: There were two earthquakes on the eastern side of Mt. Rainier over the weekend -- a M3.4 and M2.9. That is really about it. Yet, somehow, this is translated into headlines like "Wave of quakes occur around Mt. Rainier" and "Series of earthquakes rattle Mount Rainier Area" (along with the aforementioned "Spate of quakes around Mt. Rainier"). So, were these earthquakes notable enough to pull out the trusty media thesaurus to see how many synonyms for "groups of things" could be broken out? Not really. If you check out the "Recent Earthquakes at Rainier" from the Pacific Northwest Seismic Network, you can see that over the last month, Rainier has seen about 12 earthquakes -- this includes everything down to less than M1 -- pretty much no one would have noticed any of these short possibly the recent M3.4 (but that is dicey). If we use El Hierro has an example again, before the eruption there we saw thousands of earthquakes a month. Even over the last year, Rainier has been pretty quiet, with maybe a few dozen, some of which do cluster thanks to the distribution through time of random events. Even looking at the webicorders for Rainier, they look like a calm lake save for the usual environmental blips and shaking from tectonic earthquakes -- nothing magmatic whatsoever. Any active volcano (and by that I mean a volcano that has erupted in the last few hundred years) will experience seismicity, so this level of earthquake activity is well within the normal "background" seismicity at Rainier. This just comes with familiarity with the normal activity of an area -- and as Dr. Steve Malone of University of Washington put it when asked about the current earthquakes, "It helps seeing these types of events over, in my case, decades." I do understand why this sort of materials makes the news -- everyone wants to be the first to get on board if Rainier does become active again. The last confirmed eruption from Rainier was a VEI 1 explosion in 1894 and since then, all has been quiet. Now, this doesn't mean we don't need to be prepared for another eruption at Rainier -- which is exactly why Dr. Bill Steele of the PNSN said that although this seismicity is "normal" that they'll keep an eye on Rainier (as they always do). However, it would be nice to see the press not get up in arms every time there are a few earthquakes at a volcano in a seismicity active region. UPDATE: Now, you might have noticed the image for this post has changed. Well, someone pointed out that the image was, in fact, Mt. Adams, not Rainier. When I read that, I blinked a few images and thought "Surely, I couldn't have posted a picture of Adams - I took this picture for crying out loud." However, I checked I can't be sure if it is Adams or Rainier. I feel awful, considering that type of mistaken identity is what I get irritated with myself in articles, so to do it myself is maddening. I think it is the first manifestation of my lack of sleep, but if not, then this post is cursed.