Mount Marilyn: A Name That Will Stick...Finally 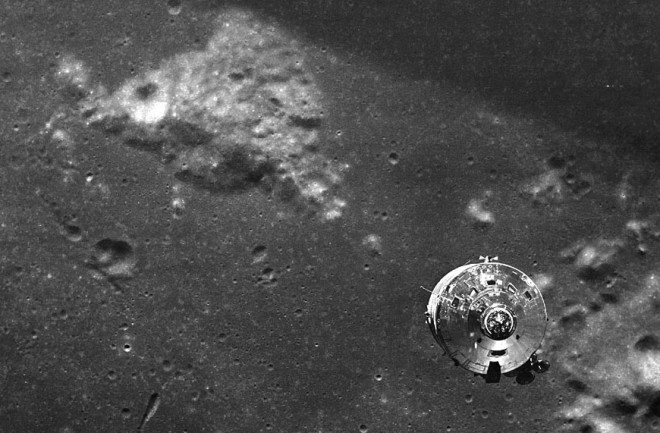 Apollo 10 photograph taken from the Lunar Module "Snoopy" showing the Command Module "Charlie Brown" with Mt. Marilyn in the background (north is to the left, scene is 80 km wide). (Credit: LROC) In 1968, Jim Lovell became the first human to pilot a spacecraft — Apollo 8 — around another world. And two years later, his Apollo 13 heroics earned him an eternal place in spaceflight history. But those feats also left Lovell as the only person to visit the moon twice but never walk its surface. In July, Lovell got his chance to leave a lasting mark on our satellite. Explorers have always named newly discovered landmarks. But things didn’t work out that way for Apollo astronauts — at least until 2017. His wife’s name is now immortalized in Mount Marilyn, ending a years-long effort to recognize its place in lunar history. NASA’s astronauts put informal names on lunar features that could help them navigate. And those names ended up on maps and historical documents of the era. Some 82 Apollo-era names, like Tranquility Base, were made official before 1973. But for the last 45 years, astronomy’s official nomenclature group, the International Astronomical Union (IAU) — known for dethroning Pluto — wouldn’t make new astronaut-chosen names official. That means dozens of astronaut-named features don’t appear on official moon maps. That hasn’t made astronauts happy.

But Lovell’s story is the best known. As navigator on the Apollo 8 mission, Lovell carefully documented his path over the Sea of Tranquility, where the space agency hoped to eventually land. In the process, he noticed a small, pyramid-shaped mountain near the planned Apollo 11 landing site. “I named it Mount Marilyn for two reasons,” Lovell said in a recent interview. “First of all, it was distinctive, and I could easily see it on our orbits around the moon. Second I would not forget the name.”

(Credit: LROC) But Lovell admits he never expected the name to last. It’s usefulness as a landmark proved him wrong. When Apollo 10 practiced landing near Tranquility Base, the crew members used Mount Marilyn to double check their timing. During Apollo 11, Neil Armstrong relied on it as he squeaked out a harrowing landing. “That’s why Mount Marilyn is so important because it was the stepping stone for Apollo 11,” Lovell says. Over the decades, the story also worked its way into spaceflight lore, appearing in books and news stories and even Hollywood’s Apollo 13. But Lovell never thought it was his place to ask the IAU to officially adopt the name.

Arizona State University’s Mark Robinson, a lunar scientist, took up that task in 2014. He wrote up a proposal to the IAU’s nomenclature committee asking them to formally accept Mount Marilyn and a couple other sites. “The geologists all know these names, and it just seemed ridiculous that they didn’t show up on the map,” Robinson says. “I would use the name Mount Marilyn, but I’d put an asterisk by it or use parentheses to say ‘not officially recognized by IAU.’ ” To his consternation, the IAU working group rejected the application. They wrote:

“The [working group] understands the desire to commemorate Apollo astronauts (and Soviet cosmonauts), but sees no compelling reasons to formally approve additional operational names that astronauts applied to various lunar surface features. Discussions of such features in the scientific literature over the last 40 years have not been hindered by lack of formal IAU names. Furthermore, many of the names violate IAU rules such as using names of people who are still alive, and naming features according to themes associated with specific descriptor terms (e.g., mountains are named after nearby craters, scientists or terrestrial mountain ranges).”

The IAU group added another reason, too. They were worried adopting these informal names for the moon would create nomenclature havoc on Mars, as rover pilots asserted their rights to name every strange new feature.

James A. Lovell is photographed inside his Gemini spacecraft during the Gemini-12 mission. (Credit: NASA) “There are perhaps hundreds of very informal names that have been applied by various Mars rover teams to craters, outcrops, sand dunes, etc.” the group wrote, “it would be a disaster to add such names to official Mars maps and the nomenclature database.” Robinson rejected the argument as spurious. The IAU isn’t in the business of keeping track of every rock. And he said finding such features, like say, “Egg Rock,” doesn’t pack the same historical significance as the Apollo missions. “This is the first time human beings visited and set foot on another world,” Robinson says.

Then, earlier this year, the astronomer and the astronaut resubmitted the application to the IAU. And last month, the IAU abruptly reversed course. With little fanfare, the group adopted official names for three Apollo 11 landing site features, including Mount Marilyn and two other well-known lunar landmarks, the Little West and Double craters. They’re the first such new names in nearly half a century. Robinson hopes the IAU will go on to recognize other Apollo landmarks, but for now he’s just thrilled to make the Lovells happy. Lovell, 89, who kept the latest campaign a secret from Marilyn, 87, enjoyed revealing it at last. “She was quite amazed,” Lovell says. “In exploration there’s romanticism, too.”