More Trouble for the Hubble 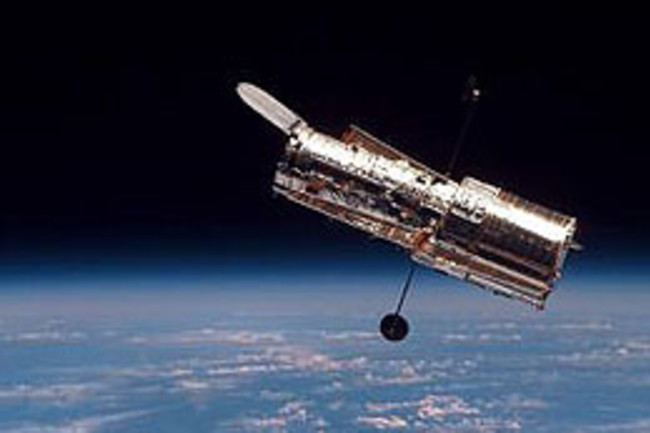 The debate over the Hubble Space Telescope will not go away. After NASA administrator Sean O’Keefe announced plans to scrap the famous telescope on January 16, 2004, public and scientific outcry inspired several plans to save it. Now, just as Hubble’s future was looking brighter, the telescope has run into one of the greatest enemies of big science projects: money. If NASA’s proposed 2006 budget passes, there will be no Hubble rescue mission and the telescope will probably die by 2008. “I think it’s a tragedy for the nation. It’s a tragedy for science. I think it’s a tragedy for everyone who’s curious about the universe,” says John Bahcall from the Institute of Advanced Study in Princeton.

For Bahcall and Hubble’s other boosters, the latest news caps a roller-coaster year of mixed signals about the telescope’s fate. O’Keefe initially refused to authorize a space shuttle flight to repair and upgrade Hubble, citing concerns for astronaut safety, but solicited proposals for a robotic repair mission of the telescope at the start of June 2004. Then in August he promised to ask Congress to fund such a mission. “Everybody says, ‘We want to save the Hubble.’ Well, let’s go save the Hubble,” he said.

Meanwhile, the National Academy of Sciences released a NASA-commissioned report that concluded that a manned shuttle mission had a higher chance of success and could be done sooner and cheaper than a robotic effort. Another expert panel, convened at the behest of Congress, affirmed the academy’s conclusion. The American Astronomical Society also advocated a manned mission.

NASA’s 2006 budget proposal seems to put the debate to an end: The only money tagged for Hubble will be used to “deorbit” it—that is, to have it enter the atmosphere in a controlled way so that it crashes safely into the ocean. NASA’s budget documents say that a rescue mission would cost a steep $1 billion, which would eat seriously into other NASA science programs. One inside source questions the agency’s math: “The shuttle program costs about $4 billion, so if you only fly four shuttles, then the cost per shuttle is $1 billion each. But if you fly five shuttles, the cost goes up to $4.2 billion; the marginal cost of another shuttle trip is petty small.”

Colin Norman, an astronomer at the Space Telescope Science Institute, notes that NASA has already built two expensive new instruments, the Cosmic Origins Spectrograph and the Wide Field Camera 3, for the cancelled Hubble upgrade. Instead of salvaging the current Hubble, he proposes using the parts to create a replacement, the Hubble Origins Probe. Adding a camera called the Very Wide Field Imager, currently under development in Japan, would allow the new telescope to study dark energy and dark matter, and to search for planets around other stars. “You get a telescope that is Hubble plus,” Norman says. Many of Norman’s colleagues are unconvinced. “It seems kind of nutty to send up something new when there’s something already there that can do the job,” says Barry Barish of Caltech.

In fact, NASA already has a Hubble successor in the works: the James Webb Space Telescope, scheduled for launch in August 2011. Ground-based telescopes are also becoming vastly more capable. The best of them can now nearly match Hubble’s sharpness and can pick out even fainter objects. On the other hand, they are still limited by Earth’s atmosphere, which absorbs ultraviolet rays from energetic objects such as young stars and quasars. The Webb telescope is optimized to study the earliest and most distant galaxies, which are best studied at infrared wavelengths that are slightly longer than visible light. As a result, it not only won’t detect ultraviolet, it won’t even be able to see ordinary light. “It’s not going to do the science that the Hubble hasn’t done yet. It’s not the next-generation Hubble,” says Barish.

Astronomers may soon have to adjust to live without Hubble’s skills. The telescope’s six gyroscopes, which keep it steady, are failing one by one. Today, the telescope is down to three. When the gyroscopes give out altogether, Hubble will shut itself down but will remain salvageable. Battery failure is a more serious problem. The current batteries could expire as early as 2008. When this happens the telescope will cool off and freeze, warping its structure beyond repair.

Bahcall, a veteran of many large physics and astronomy projects, remains optimistic that Hubble’s troubles will pass as they have before: “In 1976 the Large Space Telescope, later to become Hubble, was omitted from the president’s budget as a result of a decision to favor nonscientific or development activities at NASA, very similar to what’s happening with Hubble now. Astronomers and physicists descended upon Congress and awakened an interest in the telescope that has only increased over the years. The telescope was restored in the budget, and the result is the amazing images we have seen over the past decade and half. I am hopeful that a bipartisan group of senators and congressmen will again restore the Hubble Space Telescope to the budget. I think its future may even be brighter than its past.”