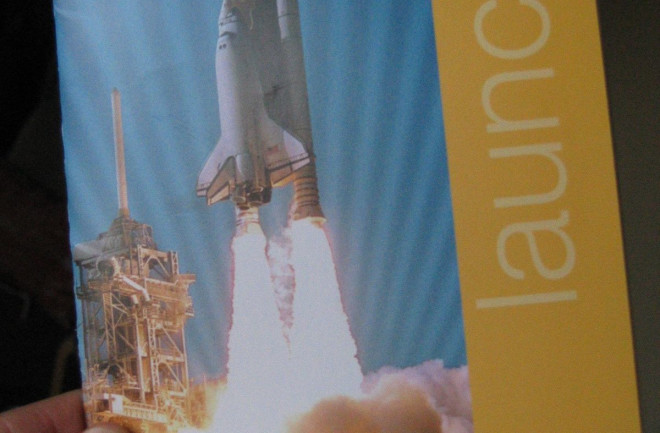 As mentioned in a previous post, I am now deep into the Committee Era of my career. This means a lot of sitting in conference rooms, writing reports, and making Important Decisions. The work is essential for keeping the scientific enterprise running, and for ensuring the future of the field, but it also means time away from home and work, with no compensation beyond the frequent flyer miles you accrue, a satisfying sense of paying it forward for younger scientists, and sometimes a decent dinner.

However, occasionally there are perks. On the right you see the invitation I got in the mail a few weeks back. No, it’s not for yet another committee meeting, but instead is an invitation to the mutha-frakkin’ space shuttle launch! Booyah! Rockets! Loud noises! Massive objects going really fast in directions they are not meant to go! (um, can you tell I’m excited?)

The launch is for the final servicing mission to upgrade the Hubble Space Telescope. The astronauts (including astrophysicist-HST-repair-god John Grunsfeld) will be overhauling both the scientific instruments and many of the systems on the telescope itself (see the great interactive graphics put together by the New York Times). I could go into exhaustive detail about everything they hope to fix, but the mission should wind up doing something like the following:

Even in its somewhat, shall we say, “well-loved” state, HST is still an amazing device, and still sends back cutting edge science, in spite of the fact that it’s down to running on a ~15 year old camera and back up electronics. But man, if everything in the repair mission goes well, the telescope is going to be incredible. Let’s all keep fingers crossed for the safety of the astronauts, and wish them the best of luck with their work!

(PS. I’ll be part of a press conference on Sunday, helping to honor WFPC2, The Camera That Wouldn’t Die. I’m guessing it’ll be on NASA Select (on cable). It looks like you can also stream video directly to your computer. Launch is scheduled for 2pm Monday the 11th!)

(PPS. And Astropixie has an image up of the most awesome NASA promotional poster ever created. I first saw it on a hallway at the Space Telescope Science Institute and have been coveting one ever since. Seriously — click over and take a peak.)