Also known as, "scientific progress goes boink." One of the benefits of being a Master of Time and Space is that I get to see the future. For example, cosmologically-inclined folks have been wondering for a few weeks about this press release from the TAUP conference in Munich, which includes the lines "Latest results from the CRESST Experiment provide an indication of dark matter. The press conference will be held on 6. September 2011 starting at 2:00 pm." Suspense! But I know what they're going to say. As Neal Weiner points out, we don't have to wait for the press conference; the friendly folks at the CRESST experiment have ambitiously decided to write a paper as well as giving a press conference, and that paper appeared on the arxiv this evening. (You remember Neal as a distinguished guest blogger; re-read that post to get your bearings in this complicated game.) Very short version: they claim to see some signal that is statistically significantly greater than background, consistent with a WIMP dark-matter particle with a mass of around 20-40 GeV. Slightly longer version:

Results from 730 kg days of the CRESST-II Dark Matter SearchG. Angloher, M. Bauer, I. Bavykina, A. Bento, C. Bucci, C. Ciemniak, G. Deuter, F. von Feilitzsch, D. Hauff, P. Huff, C. Isaila, J. Jochum, M. Kiefer, M. Kimmerle, J.-C. Lanfranchi, F. Petricca, S. Pfister, W. Potzel, F. Pröbst, F. Reindl, S. Roth, K. Rottler, C. Sailer, K. Schäffner, J. Schmaler, S. Scholl, W. Seidel, M. von Sivers, L. Stodolsky, C. Strandhagen, R. Strauß, A. Tanzke, I. Usherov, S. Wawoczny, M. Willers, A. Zöller The CRESST-II cryogenic Dark Matter search, aiming at detection of WIMPs via elastic scattering off nuclei in CaWO$_4$ crystals, completed 730 kg days of data taking in 2011. We present the data collected with eight detector modules, each with a two-channel readout; one for a phonon signal and the other for coincidently produced scintillation light. The former provides a precise measure of the energy deposited by an interaction, and the ratio of scintillation light to deposited energy can be used to discriminate different types of interacting particles and thus to distinguish possible signal events from the dominant backgrounds. Sixty-seven events are found in the acceptance region where a WIMP signal in the form of low energy nuclear recoils would be expected. We estimate background contributions to this observation from four sources: 1) "leakage" from the e/gamma-band 2) "leakage" from the alpha-particle band 3) neutrons and 4) Pb-206 recoils from Po-210 decay. Using a maximum likelihood analysis, we find, at a high statistical significance, that these sources alone are not sufficient to explain the data. The addition of a signal due to scattering of relatively light WIMPs could account for this discrepancy, and we determine the associated WIMP parameters. 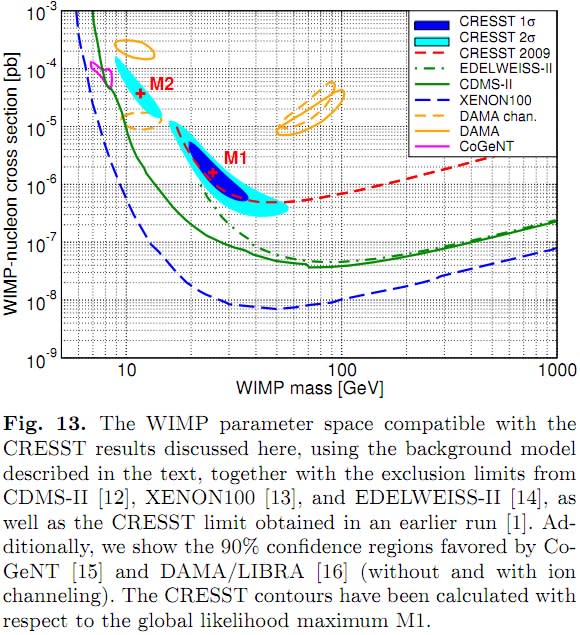 Taken at face value, what we have is yet another indication -- joining results from DAMA and CoGeNT, although not completely consistent with them -- of a dark matter signal that is (1) lower mass than most theorists would have expected, and (2) nominally ruled out by other experiments such as XENON and CDMS. So either the universe is really messing with us by making dark matter more complicated than we might have thought (but still accessible to our experiments), or searching for dark matter is really hard and the experiments are still fighting with unknown sources of error. Or both! So this might be extremely exciting, but at the moment we're still stuck saying: patience until it all gets figured out. We can take our time to get it right, the universe will still be there tomorrow.