Moon hoax: why not use telescopes to look at the landers?

In July 1969, Man first walked on the Moon. Over the course of three more years, we did it five more times.

Despite the return of hundreds of kilos of rocks, thousands of pictures, and independent verification and authentication from dozens of countries (some of which were and still are our enemies), some people stubbornly refuse to accept the fact that the Apollo Moon landings were real.

I need not go into their falacious claims here (after all, I've written on them extensively elsewhere). Instead, let's look at a seemingly simple question of verification: if the landings were real, why not point Hubble or some other telescope at the landing sites and take pictures of the landers? 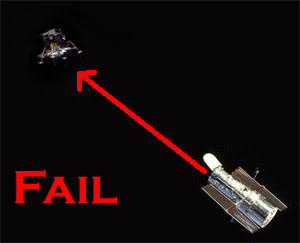 Hubble and the Lunar Module: nope

This question is obvious enough, and I've gotten it so many times I decided to write this description of just why this won't work. The answer is pretty surprising to most people, but the science doesn't lie.

The basic idea is that when the astronauts left the Moon, they left behind several artifacts, including the base of the lunar module (called the descent stage) and the rovers (for Apollo 15, 16, and 17). The descent stages were a little over 4 meters wide (the landing legs spread out were 9 meters across, but are narrow, so the bulk of the stage would be easier to see). The rovers were about 3 meters long and 2 wide.

Those numbers sound like you should be able to spot them with, say, Hubble. But can you?

The question here is one of resolution: how big does an object have to be before a telescope can resolve it, that is, see it as more than just a dot? As an example, a person standing next to you is easy to see and easily identifiable. But from a mile away that human is far more difficult to see, and from ten miles away is just a dot (if that).

The ability for a telescope to resolve an object is, as you'd expect, directly related to the size of the mirror or lens. There is a simple relationship between mirror size and resolving power: R = 11.6 / D. What does this mean?

First, R = the angular size of the object in arcseconds. An arcsecond is a measure of angular size (how big an object appears to be -- if two objects are the same physical size, the one farther away will appear smaller, and have a smaller angular size). There are 3600 arcseconds to a degree, and to give you an idea of how small a measure this is, the Moon is about 0.5 degrees = 1800 arcseconds across.

To be totally accurate, there's a twist to this. Well, really two. The first is that there's a wavelength dependence too; for a given telescope size, the shorter the wavelength the more resolution you get (a telescope will resolve blue objects better than red ones, since blue has a shorter wavelength). But this is pretty minor compared to mirror size, and we can ignore it here (plus it's already compensated for in the constant 11.6 that we used above).

Second, there's a statistical rule that says that you actually need an object to be twice that theoretical size to be properly resolved (I won't go into boring details, but you can look up the Nyquist Sampling Theorem if you're looking for an excuse to slack off at work). So really, Hubble's working resolution limit is about 0.1 arcseconds. There are tricks you can do to get slightly higher resolution, but that's getting too picky. Let's just call it 0.1 arcseconds.

So what does this mean if you want to look at the lunar artifacts? Well, now we have to figure out what the angular size of a given piece of Apollo machinery is, and then compare it to Hubble’s resolution. 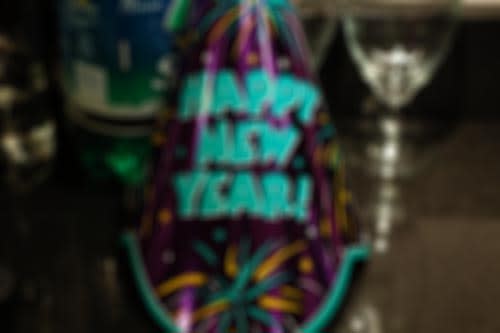 There is another simple formula you can use to determine the angular size of an object based on its physical size and its distance: (d / D) x 206265 = α. In other words, take the physical size (d) of an object, divide it by the distance (D), multiply that by the constant 206265, and that gives you the angular size (α) in arcseconds (make sure D and d are in the same units!).

That’s a pretty big surprise to most people. They’re used to seeing magnificent detail in Hubble images, stars in galaxies and wisps of gas in beautiful nebulae. But those objects are far, far larger than the Moon. Hubble’s resolution is 0.1 arcseconds no matter how far away an object is. Those wisps of gas appear to be finely resolved, but they’re billions of kilometers across. That’s a bit roomier than the lunar landers were.

So even if we built a colossal sports arena in Tycho crater, Hubble would barely see it at all. The landers, rovers, and other junk left on the lunar surface by the astronauts are totally invisible.

Using a bigger telescope won’t help much. You’d need a mirror 50 times bigger than Hubble’s to see the landers at all, and we don’t have a 100 meter telescope handy.

However, there are two tricks we can use here. One is to look not for the artifacts themselves, but for their shadows. At sunrise or sunset, the shadow from a lander might be long enough to detect, even if the lander itself is invisible. However, this is a very tricky observation and has to be timed just right (and the landscape itself may hide the shadow; crater rims, mountains, and natural dips and bumps might prevent sunlight from hitting the lander until the Sun is high in the sky, and that will shorten the shadows).

Plus, try to convince a committee in charge of hotly-contested and hugely over-subscribed telescopes to give you a night to try this and see how they react. Good luck ever getting an observation again.

The other method is obvious enough: go back to the Moon and take a look. Later this year we will be sending the Lunar Reconnaissance Orbiter to the Moon, and it will be able to resolve objects as small as 0.5 meters across (it’s far smaller than Hubble, but it’ll be a lot closer to the Moon). It will easily resolve the landers, and even the rovers.

But I don’t think that will help us in our argument. Moon Hoax believers have made it their mission in life to deny the veritable tsunami of evidence that the landings were real. That includes all the pictures taken by the astronauts themselves. Do you really think they’d believe more pictures returned by NASA?

I sure don’t. Once you stick your fingers in your ears and start saying "LALALALALA I can’t hear you" all bets are off, and no amount of evidence will help. The only thing to do is to go back.

And that’s just what we’re doing. Not to prove to Apollo deniers anything, of course. They can sit here back on Earth and pretend it’s flat for all I care. But the rest of us will look up, look out… and shoot the Moon.