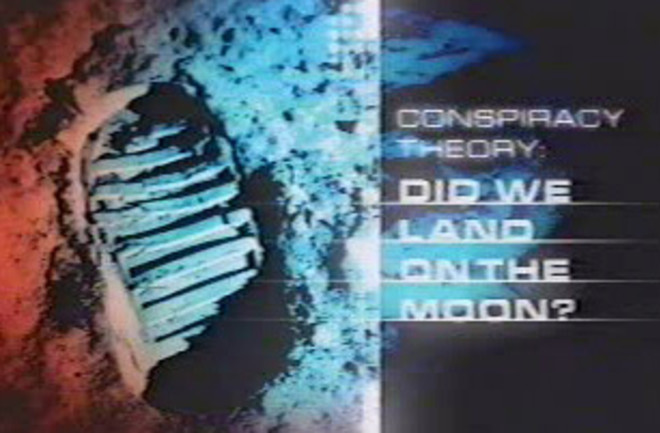 My friend and fellow skeptic Tim Farley reminded me that today is the tenth anniversary of Fox airing the TV show "Conspiracy Theory: Did We Land on the Moon?" Yay? If I had to describe that show in one word, it would be "grotesquely distorting reality, an execrable steaming pile of offal that doesn't come within a glancing blow of the truth." Was that more than one word? Well, it's hard to find a single word that truly captures the feel of that program. I remember that week pretty well, in fact. I had just started my job at Sonoma State University, having uprooted my family from suburban DC and moving 5000 km west just the month before. I was puttering around on my computer when the phone rang: it was my pal Dan Vergano, who writes for USA Today. He had some questions about Pluto, so we chatted for a while, and then he asked me that fateful question that would, quite seriously and in all honesty, change my life: "Hey, did you hear about this Fox TV show about the Moon landings being faked? It's airing on Thursday." Ironically, at that time I had just finished writing about people who thought Apollo was faked for my first book, Bad Astronomy, so I was pretty familiar with the arguments. I was able to procure an advance copy of the show and watched the whole thing. It was like watching a snuff film, except the victims were 1) reality, and b) the immense effort of nearly half a million people to get Apollo off the ground and to the Moon.

I sat down and wrote a point-by-point dissection of the show, waiting until after it aired to actually post it on my site. I was upset, but didn't think the page would help much; the web was still a bit shiny and new back then. Ha! By Monday, the page was out of control. To my shock, CNN and NASA had both linked to it, and I was getting flooded with emails. Most were supportive, but some were from, um, people whose grip on reality was somewhat tenuous. One person called me "Mr. Smarty Pants Astronomer" and proceeded to tell me how dust motes in an Apollo 13 photo were actually stars. Lots of other emails were on par with that one. One in particular caught my eye. It was describing the landing of Apollo 16, and how the astronauts had a hard time telling how far away rocks were; the lack of an atmosphere and the shapes of the rocks kept fooling them into thinking they were closer than they really were. OK, no big deal, but then I noticed the author of the email kept using the word "we". Suspiciously, I scrolled to the bottom, and it was signed by Apollo 16 lunar lander pilot Charlie Duke! Holy Haleakala. That was only the beginning. In the 10 years since I've written tens of thousands of words about the Moon Hoax, given invited talks about it all over the country (and Australia, too), debated Moon Hoax advocates on the radio and TV, and generally butted heads with dozens of such antiscience promulgators. But I've also met almost all the men who walked on the Moon, talked to dozens of folks who helped put them there, and gotten a chance to meet countless other great people from all over the world who love Apollo and space exploration as much as I do. It's funny: sometimes I'm asked how I feel about the claims that Apollo was faked, and the obvious answer is that this entire conspiracy theory idea is composed completely and utterly of ridiculous claims, misinterpreted photos and video, and wholly made-up nonsense. But in a very real sense it helped launch my career as a skeptic and popularizer of science. So I do have to admit I'm a little conflicted about it. That dumb TV show did a lot of damage to the American level of critical thinking, but I am where I am because of it. I think in the end, and all things considered, I wish it had never happened. On the other hand, maybe some good did come of it... I remember when I was writing that chapter in my book about the Moon Hoax. It was making me so angry that I was literally losing sleep. My wife was even a little concerned because I was tossing around in bed for many nights. But then one day I was looking over some Apollo pictures for the book, and had open in front of me a classic shot of Apollo 12 astronaut Al Bean holding a sample container filled with lunar regolith. As I examined the picture, a thought struggled to surface in my head:

Slowly, a wave of awe, joy, and happiness washed over me -- a glow of warmth that stays with me to this day. From that moment on I didn't let the conspiracy theorists bug me very much. They were wrong, but even more importantly, they didn't matter. In the long reach of history, they will be forgotten, gnats buzzing around a monumental edifice. In the late 1960s and early 70s, we did indeed put 12 human beings on the surface of another world, and did in reality and in fact bring them back to Earth. That's what matters.