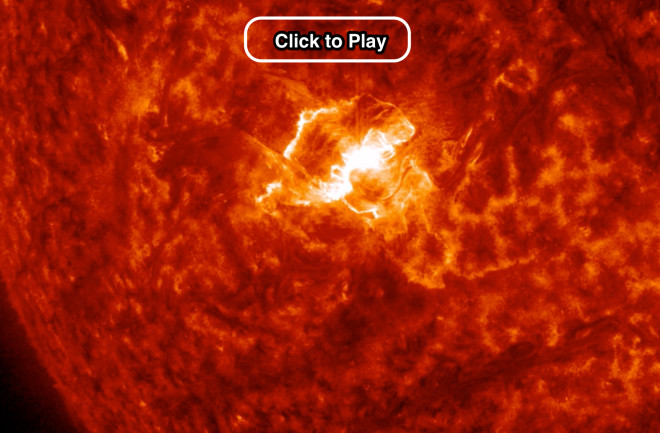 A significant flare exploded from the Sun on March 11, 2015, peaking at 12:22 p.m. EDT. The action was observed by NASA's Solar Dynamics Observatory satellite. (Source: NASA SDO/Helioviewer.org) The first monster solar flare of the year exploded from the Sun today, causing disruption to radio communications here on Earth for a time. It packed the energy of millions of hydrogen bombs exploding simultaneously. To be fair, that kind of energy release is typical of solar flares in general. But this one was an X-class flare — the most powerful category. If you doubt that they can be that powerful, have a look at the image above. It's a screenshot of a video I created using data from the Solar Dynamics Observatory satellite. Check out the blindingly bright spot. That's the flare, frozen in action. Now, check out the image of the Earth at the lower left corner, included for scale. Humbling, yes? Also make sure to click the video to watch it. (It covers a time period of about six hours.) I've also included other views below. But first, some details about flares and what happened today: Solar flares occur when pent up magnetic energy in the Sun's atmosphere is suddenly and rapidly released, spewing out radiation across almost the entire electromagnetic spectrum, along with a spray of particles. Radiation travels at the speed of light, so if a flare is powerful enough and the Sun is facing Earth, it can reach us in about eight minutes. Earth's magnetic field and atmosphere protect us here on the ground. But the radiation can disrupt radio communications. That's exactly what happened today:

The map above shows the area of the sunlit side of the Earth where radio blackouts would have occurred. According to the Space Weather Prediction Center here in Boulder, Colorado, it was strong event — meaning high-frequency radio communications were affected across a wide area, with loss of radio contact for about an hour on the sunlit side of Earth. From the SWPC:

These frequencies are used by amateur (ham) radio operators and many industries such as commercial airlines. They are also used by a number of government agencies such as the Federal Emergency Management Agency and the Department of Defense.

Here's a video showing a broader view of today's flare (covering about 12 hours):

Look closely and you'll see some material that blasts outward as the bright flash explodes from the Sun.

The classification for solar flares uses different letters to indicate their strength. Here are the details from NASA:

The biggest flares are known as "X-class flares" based on a classification system that divides solar flares according to their strength. The smallest ones are A-class (near background levels), followed by B, C, M and X. Similar to the Richter scale for earthquakes, each letter represents a 10-fold increase in energy output. So an X is ten times an M and 100 times a C. Within each letter class there is a finer scale from 1 to 9.

Lastly, flares often are associated with ejections of massive amounts of matter. These coronal mass ejections, or CMEs, can cause geomagnetic storms, which if strong enough can disrupt satellites, communications, and electrical grids on Earth. The particles in a CME do not travel nearly as fast as the radiation in a flare. As I'm writing this, it's unclear whether Earth will be affected by a CME. Stay tuned.