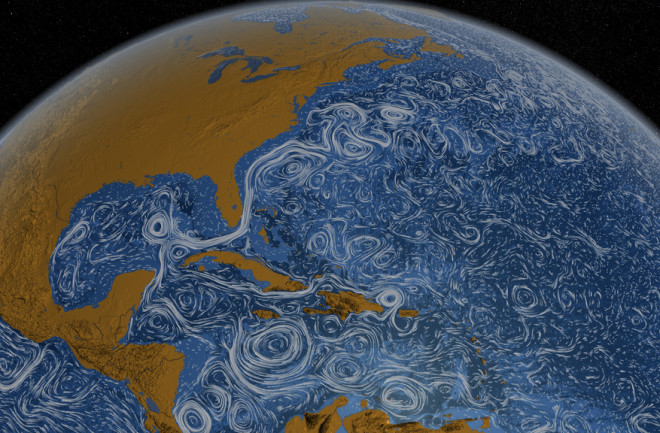 GRACE data was used, among other data, in creating this map of ocean currents from 2005 to 2007. Image courtesy NASA Goddard Space Flight Center.

In an article in the journal Science this week, University of California-Irvine professor of engineering James Famiglietti and NASA hydrologist Matthew Rodell make the case for improving the GRACE satellite program, which has been critical to understanding global water supplies.

GRACE (Gravity Recovery and Climate Experiment) has given us so much, and while scheduled for a 2017 relaunch, these water wonks argue that there are tweaks that could make it an even better water management tool. More compelling data visualization would have to be logical outcome of improvements too, right?

The GRACE mission is a joint effort between NASA and the German Aerospace Center that maps variations in Earth’s gravity field. Two identical satellite-carrying spacecraft orbit the planet about 140 miles apart. When the two are pulled away from each other, even just slightly, it means they have entered an area of slightly stronger gravity. The change could be imperceptible to the human eye, but a precise microwave ranging system on board can detect it. And those gravitational changes reflect changes in mass on the Earth, including mountains, valleys and ocean trenches. Many of the small-scale mass variations that are detected have to do with water as it moves and evaporates.

An artist's concept of the twin GRACE satellites that launched in 2002. Illustration courtesy of NASA/JPL-Caltech.

So, GRACE data has been used to study ocean currents, melting ice sheets and glaciers, surface water runoff, groundwater storage and more. It is often the best tool for gathering water data in remote or less-developed regions.

The GRACE satellites have collected low-resolution global water data (or information on water storage changes within river basins and aquifers that are 200,000 km2 or larger) on a near-monthly basis since 2002. (With an impressive accuracy of a 1.5 cm equivalent in water height.)

They have been used to create the U.S. Drought Monitor, assess groundwater depletion in India, and measure freshwater loses in the Middle East and annual ice mass loss in Greenland, among many other things. They even helped to determine that groundwater losses in the U.S. may be contributing to sea-level rise.

A study released earlier this year used GRACE data to determine that large parts of the arid Middle East had experienced significant water loss from 2003 to 2009. Image courtesy NASA/UC Irvine/NCAR.

And Famiglietti and Rodell have used GRACE data to show that between 2003 and 2012, California’s Central Valley (#1), the Southern High Plains Aquifer (#2), the areas around Houston (#3) and Alabama (#4), and the mid-Atlantic states (#5) have experienced groundwater loses, while areas in the Upper Mississippi River Basin have experienced increase water storage along with flooding (see image below).

The paper authors recommend that GRACE, originally planned as a five year mission, remain in service but release data sooner (currently it takes 2-6 months) and collect higher-resolution information (at a scale less than 50,000 km2) more often (every week or every other week) in order to better serve water managers.

"GRACE data provide new insights into regions in the U.S. and around the world where water issues have already approached the crisis stage,” Famiglietti said in a release. “Their potential for game-changing contributions to regional water management is just beginning to be realized.”