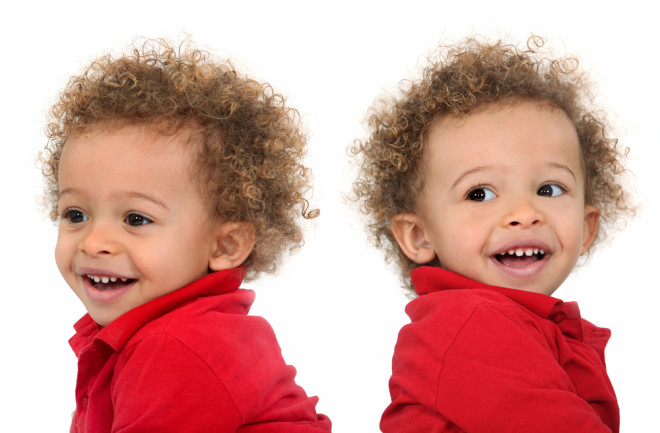 I was pointed today to a piece in the BBC titled What makes a mixed race twin white or black?. The British media seems to revisit this topic repeatedly. There are perhaps three reasons I can offer for this.

First, it tends toward sensationalism. Even though the BBC is relatively staid, when it comes to science it converges upon the tabloids. Second, because the number of non-whites in Britain is relatively small, there is a higher proportion of intermarriages between minorities and the white majority (from the perspective of minorities). This is especially true of people of Afro-Caribbean ancestry. So of the proportion of minorities a larger fraction are recently mixed in Britain than in the USA. Finally, the United States has a more complex attitude toward race relations than the United Kingdom, because the former has traditionally had a large non-white minority while the latter has only had so since the years after World War II. I suspect that “black-white twins” stories would seem in bad taste on this side of the pond, and bring up certain memories best forgotten.

Now, there are fallacies, confusions, and misleading shadings, in the BBC piece. I’ll hit those first before reviewing what’s going on here when fraternal twins exhibit totally different complexions.

It starts out somewhat ludicrously:

“Her son Leo has black skin and her daughter Hope, has white skin.”

This is false in a precise sense. Leo clearly has medium to light brown skin (there are photos in the piece). What’s going on here is that Leo has some African ancestry, and because of the rule of hypodescent all people of African ancestry with a shade of brown skin, from nearly black to light brown are termed “black skinned.” This is not a trivial semantic elision. If Leo truly had black skin, very dark brown, than there’d be a lot of explaining to do, because the genetics would be somewhat mystifying. More on that later.

"She was adopted when she was four years old, and her birth mother is Afro-Caribbean and her British birth father was white. Her DNA tests revealed that, genetically, she was exactly 50% African and 50% European."

This is very unusual, and the results suggested that Shirley’s mother had pure African roots, and that her ancestors must have moved from Africa to the Caribbean quite recently.

Not necessarily. Mixed-race people, especially those with recent admixture, don’t have their different ancestral components distributed equally across their genome. It may be that in the process of sampling chromosomes from this individual’s Afro-Caribbean mother she received almost none of the European quantum, perhaps localized to a few chromosomal segments. This “noise” in the process explains why I seem to carry an elevated proportion of East Asian ancestry in relation to both of my parents. I simply received genetic copies sampled from the more “East Asian” regions of my parents’ genomes.

“Our skin colour is determined by a number of gene variants — at least 20 variants, I would say, probably quite a few more than that,” says Dr Wilson.

This is complicated, but I’d say that the good doctor is misleading the audience. Skin color seems to be a quantitative trait where you can explain the vast majority of between population variation with only a few genes, at most six. When it comes to European-African difference variants at two loci, SLC24A5 and KITLG can account for well over half of the difference. It is true that there are many, many, genes that effect skin color, but there is a definite distribution where the vast majority of genes tweak the trait only on the margins. In other words, there may be 20 variants (there are more), but for good predictive power at the inter-population level you’re good to go with 4 or 5.

I specify inter-population level, because within populations the gene set which can allow you to predict variation may be slightly different, and you have to take into account sex differences. For hormonal reasons males seem somewhat darker than females in human populations. Additionally, people also are palest in their youth, and become darker as they age. Finally, some of the genes which explain differences between populations are invariant within a population. Therefore the genes which are of lower effect size move up the stack. So when it comes to European-African variation, the largest effect gene, SLC24A5, won’t explain anything within these two populations. That’s because it is fixed for alternative variants (the light vs. dark conferring variants). So the second effect size may move up to first effect size when you evaluate on a smaller grain (but if the second effect size is nearly fixed, then it might drop far down as well).

Now let’s move on to the common idea that darkness dominates over lightness:

This is hypodescent popping up again. Though in the West we live in an anti-racist age, at least notionally, it is interesting how concepts and models from a white supremacist era remain operative, at least implicitly. The idea that whites are recessive to non-whites makes totally sense if you code anyone with visible non-white ancestry as non-white. Even if they are genetically more white than not. The rationale for this model was the idea that there is a reversion to the more “primitive” type. So a cross between a black and a white produced a black, and a cross between a Nordic and a Mediterranean produced a Mediterranean. Inferiority taints the purity of superiority.

Less ideologically if you classify skin complexion into white and non-white in a dichotomous fashion then you logically consign the non-white trait to dominance.For example, if nearly, but not quite, white skin is “dark,” then you make it very difficult for someone with a substantial number of pigment conferring alleles to produce a child with very light skin.

Finally, now that we have elucidated the genetic architecture of pigmentation to a great extent we can make assessments of dominance and recessiveness on a locus by locus manner. If you plot skin complexion darkness as a function of reflectance you can turn it from a dichotomous or discrete trait to a continuous one. So individuals can have a “melanin index,” an integer value equivalent to their position on a scale of lightness and darkness. Converse to expectations above it turns out that on the two largest effect genes explaining difference between Africans and Europeans the light alleles are more dominant than the dark alleles! In other words, if the two alleles had an equal effect you’d expect a value between the two in their homozygote state. As it is, the values tend toward higher reflectance (light) than dark. I would caution that terms like “dominant” and “recessive” can be highly subjective and dependent on how you code the trait, the nature of the population you sample from in a polygenic character, or even scale the of values. So in this case you notice that switching from a dichotomous code of white vs. non-white to a continuous value corresponding to reflectance flips the model from the light trait being recessive to the dark, to the dark being recessive to the light (albeit, only mildly).

Because pigmentation is controlled by only a few genes the state at these loci are poor proxies for total genome content. In plainer language mixed-race siblings won’t deviate too much in their ancestral quantum, but they can deviate a great deal in their physical appearance. In fact, because of the poor correlation the slightly “blacker” twin in total ancestry may actually look more like a white person, and vice versa.

Now let’s go back to first principles. We’ll make some simplifying assumptions to illustrate what’s going on easily. Take 6 genes which control skin color. Assume equal effect. Each gene comes in two variants. Light and dark. Two copies of light result in a value of 0, while two copies of dark result in 2. A copy of each results in 1. In other words, the alleles are additive across a locus. Also assume that the genes are independent. They’re not linked. So the value at each gene is independent of the other genes. Finally, assume that the genes’ implied values summed together result in a total pigmentation phenotype outcome. So they’re additive across loci.

To make even simpler let’s assume that the parents are F1 African-European hybrids. That means that one of their parents’ was European and the other African. So both share the same ancestry of recent vintage. As it happens Africans and Europeans are very different on pigmentation genes, so we can assume that these parents carry one light copy and one dark copy across the six genes. This means you’d expect them to be brown.

Since they are brown, wouldn’t their children be brown? No. Not necessarily. As per Mendel’s Laws each contributes contributes one gene copy at each locus. So for the 6 loci above each parent contributes one pigmentation gene. What does that mean concretely? I Already simplified things to produce an elegant outcome: the F2 offspring could be all light, all dark, or one copy of both, like their parents, at any given gene. To illustrate what I’m talking about, SLC24A5 is disjoint in frequency across Africans and Europeans. All Europeans have one variant, and all Africans have another. So the offspring of a marriage between an African and a European will be heterozygote on that locus. If they marry another person of similar background, homozygote light and dark genotypes will resegregate out at fractions of 25% each, with half the outcome being heterozygote as in the parental condition. In other words, there are a 25% probability of a F2 child of F1 hybrids being “white” at this locus. There are 6 loci. Assuming independent probabilities, you multiply out 0.256, and get 1 out of ~4,000 that the child will be white like their white grandparents.

I ran this as a binomial 10,000 times, and here’s the distribution I came up with:

The white and black offspring don’t show up because the number of outcomes is so rare in this model, but as you can see the median outcome is brown, like the parents. But the tails are significant. In other words, don’t be surprised if there’s a lot of variation among the siblings. But why should you be? If you know of people from populations where pigmentation alleles are segregating in polymorphic frequencies, such as Latin Americans and South Asians, you are aware that different siblings can look strikingly different when it comes to complexion. Though I guess that’s a new insight for the British …