Sagittarius B2 contains a chiral molecule. 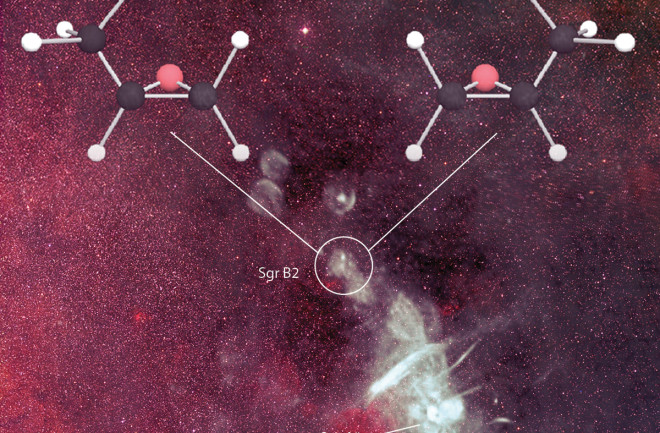 The vast gas and dust cloud Sagittarius B2 — which sits near Sagittarius A* at the center of our galaxy — contains traces of propylene oxide. (Credit: B. Saxton, NRAO/AUI/NSF, data by N.E. Kassim/Naval Research Laboratory/Sloan Digital Sky Survey)

For the first time, researchers have discovered a molecule in interstellar space that exhibits chirality: It can exist in two forms that are composed of the same atoms, but are mirror images of each other.

Think of chiral molecules as being like a pair of gloves. Each glove has five fingers and are made of the same material, but you could never slide a left-handed glove over your right hand.

Like opposite hands, chiral molecules are mirror images of each other. (Credit: B. Saxton/Business stock/Shutterstock)

The amino acids and sugars that make up our bodies are chiral. In particular, amino acids must all be of the left-handed form, while sugars are right-handed. Change the orientation of the same molecule, and it could prove fatal.

In this discovery, reported by Caltech researchers in June, radio telescopes picked up faint traces of the organic compound propylene oxide in a vast cloud of gas and dust called Sagittarius B2, which is near the center of our galaxy. While this particular molecule is not found in life on Earth, it is known to possess both left- and right-handed forms.

Finding evidence of chiral molecules in space is a first step to help explain why life on Earth looks the way it does, because if our molecules were flipped differently, our biology likely would be completely different.