Minor Eruption from the Grozny Group in the Kuril Islands 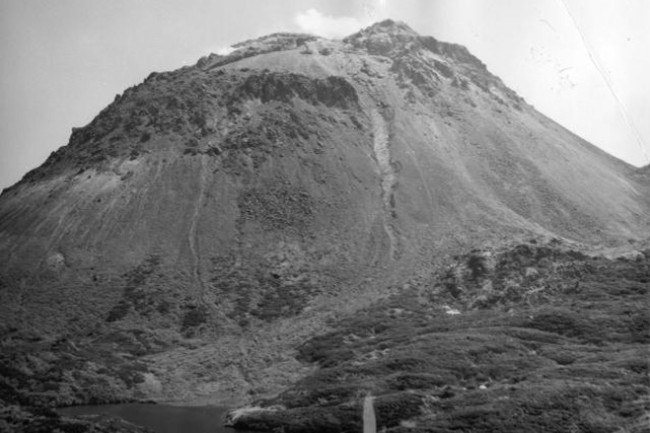 A 1989 image of the Ivan Grozny dome in the Grozny Group (Kuril Islands, Russia). Image by A. Samoluk, courtesy of the Smithsonian Institute/USGS Global Volcanism Program. It took a little bit to decipher, but it appears that the Grozny Group in the Kuril Islands may have had its first eruption since 1989. A couple of reports out of Russia suggest that the Ivan Gronzy (Ivan the Terrible; see above) dome in this cluster of lava domes within a caldera may have had a small eruption that spread ash across Iturup Island. One article says that the plume may have only been ~1 km, but it was enough to for people to note ash fall in Goryachiye Klyuchi (9 km) and Kurilsk (25 km). Beyond this, the news is, well, hard to understand. The article in the Moscow Times claims that the eruption was caused by "increased water flows rushing into the volcano after heavy downpours" and that people noticed "hydrogen peroxide fumes". Now, I'm hoping a lot of this is merely lost in translation as the ITAS TASS article talks about there no longer being a hydrogen sulfide odor in the area. In any case, if this eruption is confirmed, it is the first at the Grozny Group since 1989. The complex of volcanoes is a very hydrothermally active area, with strong fumaroles, mostly at Machekh Crater. However, all the historic eruptions from the Grozny Group, including the one in 1989, have come from Ivan Gronzy, as this new eruption seems to be as well.