Getting to Know Our Galactic Home: The Milky Way 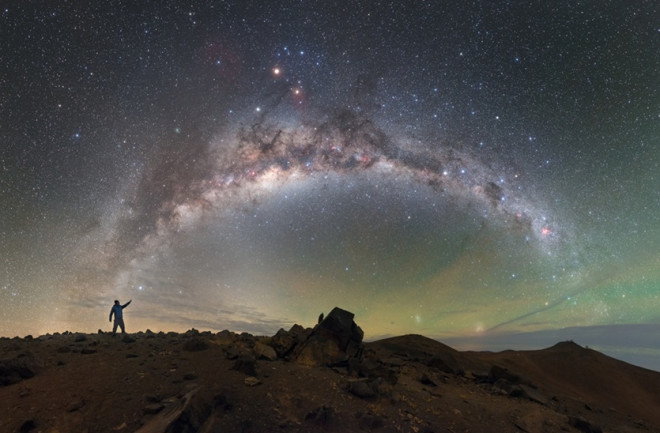 The Milky Way is the galaxy we live in, one of the countless collections of stars and dust throughout the universe. It's a reality so basic, grade school kids learn it.

But it wasn’t always so obvious.

Just 100 years ago, the nature of the Milky Way — and the universe itself — was still a matter of debate. On April 26, 1920, astronomer Harlow Shapley claimed our galaxy was the entire universe. Astronomer Heber Curtis countered that the blurry star clusters seen with a telescope were “island universes,” separate from, but analogous to, the Milky Way.

Within five years, Edwin Hubble produced a reliable distance to one of the clusters we now know is our neighbor, the Andromeda Galaxy. His measurements showed that the gulf is so vast, Andromeda must be outside the Milky Way. Upon seeing a note from Hubble describing the results, Shapley said, “Here is the letter that destroyed my universe.” He wasn’t all wrong, though. In the years since, his prediction that our solar system is far from the Milky Way’s center was proven true.

For years, the Milky Way’s size was relatively easy to remember: about 1,000 light-years thick, 100,000 light-years across. But a 2015 study suggested our galaxy might actually be at least 150,000 light-years wide. That vast area would hold roughly 680 billion times the sun’s mass.

The Milky Way has between 100 billion and 400 billion stars. And each star likely has an average of more than one planet — meaning we might have over 400 billion exoplanet neighbors.

The Milky Way, which is 13 billion years old, is among some 50 galaxies in the Local Group, which itself is part of the Local Supercluster. Only the Triangulum and Andromeda galaxies are close to ours in size; the rest are much smaller dwarf galaxies. In roughly 4 billion years, the Milky Way will be even bigger. That’s because Andromeda, 2.5 million light-years away, is on a collision course with us. The two will combine to become the so-called Milkomeda Galaxy.

On a clear night with no light pollution, the Milky Way appears to us as a hazy band of light splashed across the sky. The ancient Greeks thought the phenomenon was from the spraying of divine breast milk, when Hera tore a suckling baby Heracles away from her breast.

Other cultures had their own name for it, but the Greeks’ is the one that stuck. Even after learning about other galaxies, the mythological origins remain in the word itself: Galaxias kyklos literally means “milky circle” in Greek.

For astronomers on Earth, figuring out what the Milky Way looks like from the outside is no easy task. But we’ve come up with a pretty reasonable self-portrait by mapping the distribution of our galaxy’s stars, and comparing that data with the shapes of other galaxies.

Central bar: Some spiral galaxies, like our own, have a thick bar full of stars and dust cutting across the center; it’s typically a sign of an older galaxy.

Center: As with most galaxies, ours has a supermassive black hole in the center. It’s named Sagittarius A* and weighs as much as 4 million suns.

Arms: Our galaxy has two prominent arms, Perseus and Scutum-Centaurus, and a handful of fainter ones, a difference mostly due to uneven star distribution.

Us: Our solar system lies in an offshoot of the Sagittarius arm known as the Orion Spur, some 26,000 light-years away from the galactic center.

Disk: Most of the Milky Way’s stars, gas and dust lie in this flat plane.

Bulge: The Milky Way bulges toward its center, with a roughly X-shaped distribution of stars at its core.

Halo: Surrounding the flat disk of our galaxy lies an enormous ball-shaped collection of hot gas, spinning in the same direction as the Milky Way’s arms.