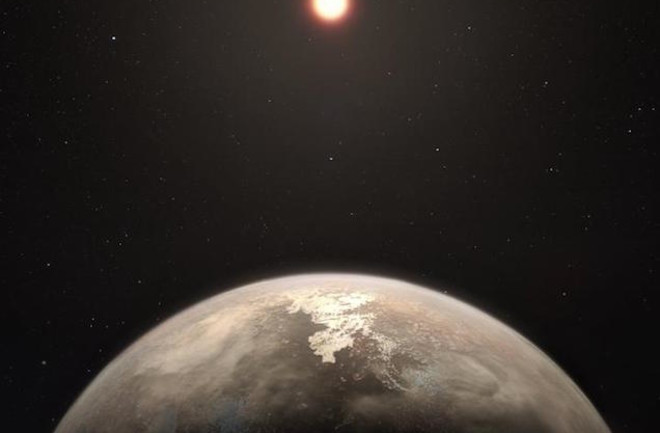 This artist’s impression shows Ross 128 b, the second closest temperate planet to Earth. (Credit: ESO/M. Kornmesser) The discovery of any Earth-like exoplanet evokes excitement in the science community, but the hype is definitely heightened when a possible rocky world is found close to home. Last year, researchers announced the discovery of an exoplanet just 11 light-years from Earth — practically in our own backyard. And now, a detailed study published in the Astrophysical Journal Letters reveals crucial details about its composition and potential habitability. ESO’s High Accuracy Radial velocity Planet Searcher (HARPS) first spotted the prosperous exoplanet while observing its host star, Ross 128, in 2017. Early observations suggested that the exoplanet, dubbed Ross 128 b, was similar in size to Earth and likely had a temperate climate. This would make it the second-closest temperate world to Earth, trailing behind Proxima b, which sits just four light years away. To shed more light on our close neighbor, a group of researchers, led by Diogo Souto of the Observatório Nacional in Brazil, set out to study the chemical composition of the planet’s main influencer — its host star. In their early years, stars are encased by disks of gas and dust that go on to form planets, with the star’s composition influencing the elements present in the disks, and therefore the structure and composition of the resulting planets. By measuring the star’s near-infrared light with the Sloan Digital Sky Survey's APOGEE spectroscopic instrument, the research team was able to determine the star’s abundance of aluminum, calcium, carbon, iron, magnesium, oxygen, potassium, and titanium. "The ability of APOGEE to measure near-infrared light, where Ross 128 is brightest, was key for this study," said researcher Johanna Teske of the Carnegie Institution of Science in a news release. "It allowed us to address some fundamental questions about Ross 128 b's `Earth-like-ness.'" The team was able to combine Ross 128’s iron and magnesium levels to estimate the mass ratio of Ross 128 b’s core and mantel layers, revealing that it likely has a core larger than Earth’s. By combining this mass data with the star’s chemical composition, they were also able to estimate Ross 128 b’s radius. A common trend is that planets with radii larger than 1.7 times that of Earth’s have gaseous envelopes, limiting their chances of habitability. Planets with smaller radii, on the other hand, are more likely to have rocky surfaces, and Ross 128 b luckily falls into this category. In addition, the researcher’s temperature measurements of Ross 128 show that its planet likely hosts a temperate climate. This corroborates previous HARPS data, which suggested that even though Ross 128 b orbits 20 times closer to its host star than Earth does to the Sun, the red dwarfs’ mild temperatures would protect the planet from extreme weather conditions. "It's exciting what we can learn about another planet by determining what the light from its host star tells us about the system's chemistry," said Souto. "Although Ross 128 b is not Earth's twin, and there is still much we don't know about its potential geologic activity, we were able to strengthen the argument that it's a temperate planet that could potentially have liquid water on its surface." Many questions about Ross 128 b still hang in the air, but since it’s incredibly close to Earth, we might end up shedding light on our neighbor sooner rather than later. This article originally appeared on Astronomy.com.