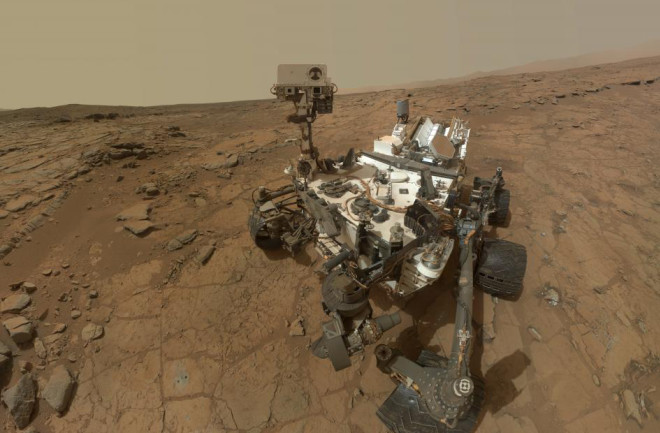 The Mars Curiosity rover detected a spike of methane on the Red Planet. (Credit: NASA/JPL-Caltech/MSSS) Is there life on Mars? That eternal question almost seems cliché in space exploration circles, but, nonetheless, we’re still waiting with bated breath for an answer. While it’s not time to exhale just yet, NASA’s Curiosity rover has sniffed out methane in Mars’ atmosphere. And that means that something, whether living or not, is actively creating the gas on Mars.

NASA scientists believed they had closed the book regarding methane on the Red Planet after the rover failed to detect the gas after eight months. In August 2013, scientists announced there was no methane on Earth’s cousin. But they were in for a surprise just two months later. While exploring its bowl-like landing site in the Gale Crater, Curiosity detected a major spike in methane levels, which quickly dissipated months later. Over the course of four different measurements starting in November 2013, methane levels increased 10-fold before tapering off in July. The Curiosity team published its findings this week in the journal

In addition to detecting a spike in methane, Curiosity also detected definitive signs of organic molecules after drilling into rock at the floor of the Gale Crater. NASA officials announced the find during a news conference at the America Geophysical Union on Tuesday. Curiosity project scientist John Grotzinger summed up the recent Curiosity finds for the

"It's a big day for us — it's a kind of crowning moment of 10 years of hard work — where we report there is methane in the atmosphere and there are also organic molecules in abundance in the sub-surface.”

Finding methane on an alien planet is a big deal in the search for life on Mars. Microbial organisms produce more than 95 percent of Earth’s methane, so it’s a target for detecting life on another planet. And methane would decompose on Mars within just a few centuries, so its production must have been relatively recent. But scientists still don’t know where this methane is coming from. Right now, scientists believe methane could have come from Martian organisms, or it could be the byproduct of a natural process called serpentinization: a process by which water chemically interacts with certain kinds of rocks. However, both theories are simply educated guesses.

This diagram depicts potential means by which methane might incorporate into Mars' atmosphere (sources) and disappear from the atmosphere (sinks). (Credit: NASA/JPL-Caltech/SAM-GSFC/Univ. of Michigan) "Right now, it's too much of a single-point measurement for us really to jump to any conclusions," Paul Mahaffy of NASA's Goddard Space Flight Center told

"So all we can really do is lay out the possibilities. And we certainly should have an open mind. Maybe there are microbes on Mars cranking out methane, but we sure can't say that ​with any certainty. It's just speculation at this point."​

Like many discoveries in science, Curiosity’s methane find leads to more questions than it answers. However, the rover team now has a new target to focus on in its search for life on Mars. “Because we are seeing signals here it’s worth coming back and doing more work,” Grotzinger told Reuters. So once again, NASA scientists have titillated us with the prospect of life on Mars, only to leave us wanting more — but they’re getting closer.