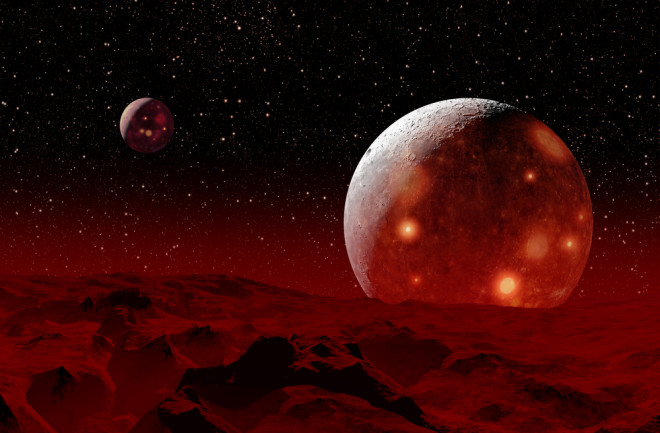 An artist's illustration of a protoplanet. (Credit: Pavel Gabzdyl/Shutterstock) Diamonds found in meteorites on Earth may have come from an ancient long-dead planet the size of Mercury or Mars, the first potential known relics from these lost worlds, a new study finds. Scientists examined a ureilite, a kind of meteorite that is rich in carbon and sometimes even possesses diamonds. More than 480 ureilites have been discovered so far, says study lead author Farhang Nabiei, a materials scientist and electron microscopist at the Swiss Federal Institute of Technology in Lausanne.

Specifically, the researchers investigated the Almahata Sitta ureilite, which fell to Earth in 2008 in the Nubian Desert in Sudan. They analyzed diamonds within the ureilite that were a few dozen to a few hundred microns large. (In comparison, the average human hair is about 100 microns wide.)

A piece of the Almahata Sitta ureilite. (Credit: Wikimedia Commons) Previous explanations for the diamonds within ureilites include powerful impacts, such as collisions between asteroids. The pressure from such impacts could have transformed graphite — the form of carbon often used in pencils — into gems. However, the large sizes of some diamonds found in ureilites hint that it may have taken more than the pressure of a cosmic impact to create them. Now, using electron beams, Nabiei and his colleagues discovered crystalline particles made of iron and sulfur within diamonds in the Almahata Sitta ureilite. Called "inclusions", these particles are only found in diamonds formed under sustained high pressures of more than 20 gigapascals. Their presence suggests these diamonds arose within the crushing pressures found in the interior of a planet. "We didn't expect to see these inclusions at all," Nabiei says.

The researchers suggested that ureilites originated within a protoplanet somewhere between the size of Mercury and Mars, dozens of which existed in the first 10 million or so years of the solar system. Such planetary embryos were the building blocks of the rocky planets now seen in the inner solar system. Ureilites may be the last remnants of these long gone celestial bodies, and the first known relics from lost protoplanets. "It's interesting to me what inclusions just tens of nanometers [billionths of a meter] large can tell us about protoplanets [that were] about 6,000 kilometers in diameter," Nabiei says. Future research can examine other ureilites for inclusions within diamonds and potentially reveal more about the lost world they came from, Nabiei says. He and his colleagues detailed their findings online April 17 in the journal Nature Communications.