On March 17, just a month from now, NASA's MESSENGER probe is scheduled to enter orbit around Mercury, the smallest planet in the solar system. No other mission from Earth has ever done this, and for the first time we'll get high-resolution maps of the entire globe. On its way down, the spacecraft was commanded to turn around and look outward, toward space. It took a series of images of what it saw... this astonishing family portrait of the solar system: 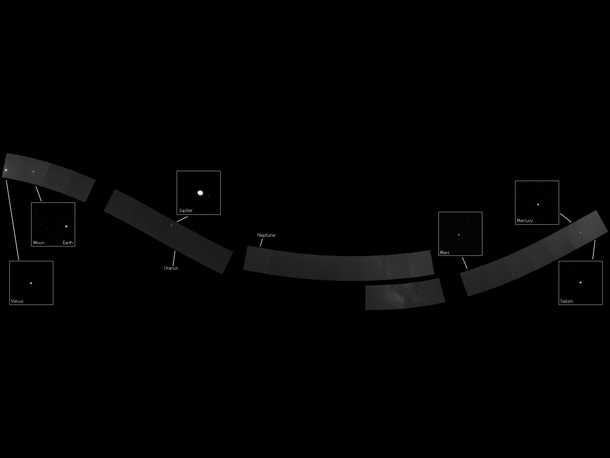 Click it to ensolarsystemate it and see it in more detail. When you do you'll see the five classical planets in our system, as well as the Earth and Moon. Uranus and Neptune are there, but too faint to see, unfortunately, but still, this is an interesting picture. In November 2010, when these pictures were taken, Mercury was still nothing more than a dot. In fact, all the planets as barely more than dots, a reminder that this probe is well away from home and nowhere near any solid ground.

I like very much the images of Venus and the Earth. Venus is technically the closest planet to MESSENGER besides Mercury, though it depends on where the planets are in their orbits. It's extremely bright as seen from the spacecraft, since MESSENGER is inside the orbit of Venus: the planet is therefore close to being full (like the full Moon) and reflects a lot of light back to the cameras. And the Earth is accompanied by the Moon! That always amazed me. I'm so used to seeing pictures of just the Earth from space that it's easy to forget that the Moon travels along with us. An important reminder in this picture is just how far the Moon is from us; 400,000 km is over 100 times the Moon's size, so it appears to be a dot located well away from its home planet. If you wanted to make a scale model of it, a good way would be to use a golf ball to be Earth, and a marble located a meter away to be the Moon. That really brings home -- ironically! -- how small and distant our Moon is. If you look to Jupiter you can see it has a couple of moons near it as well. The four moons spotted by Galileo 400 years ago are pretty big; Ganymede is actually about the same size as Mercury itself! Were Jupiter not there, Ganymede might be considered a planet on its own. 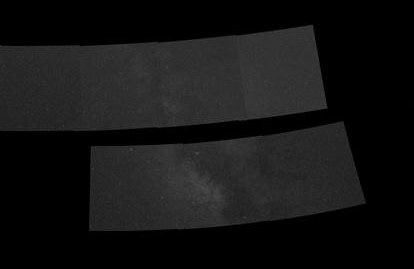 I smiled when I saw the section of the picture between Jupiter and Mars -- that fuzzy glow is the Milky Way itself! The split down the middle is a dead giveaway; that's caused by dust located in the disk of our galaxy. That section of the sky looks toward the center of our galaxy in the direction of the constellations Scorpius and Sagittarius. I mention that last part on purpose. These probes we send out commonly only return pictures of the planets at which they're aimed. Cassini sends us close-ups of Saturn, the fleet of craft orbiting Mars show us the Red Planet, and so on. It's easy to get swept up in those fantastically detailed maps of alien worlds that they send back. But don't forget the grand picture; when you go outside and look at the sky, that's essentially the same view those spacecraft have! The Milky Way you see streaming across the night sky (if you're in a dark location) is the very same sight seen by MESSENGER as it approaches Mercury, millions of kilometers away. Seeing the bulge of our galaxy toward Sagittarius from my back yard and seeing it in a picture returned from a spacecraft is, to me, a thrilling reminder that while we may be stuck here with our feet on the ground, our ideas have been launched into space to explore every corner of the solar system we can. We're pretty cool sometimes, we humans. And as I'm sure many of you thought when you saw that picture, it's much like the solar system family portrait taken by Voyager 1, seen from the outside in. So what better way to leave this post than with some of the finest words ever written by a human, inspired by that photo: the section of Cosmos called Pale Blue Dot, penned by humanity's scientific poet laureate, Carl Sagan.