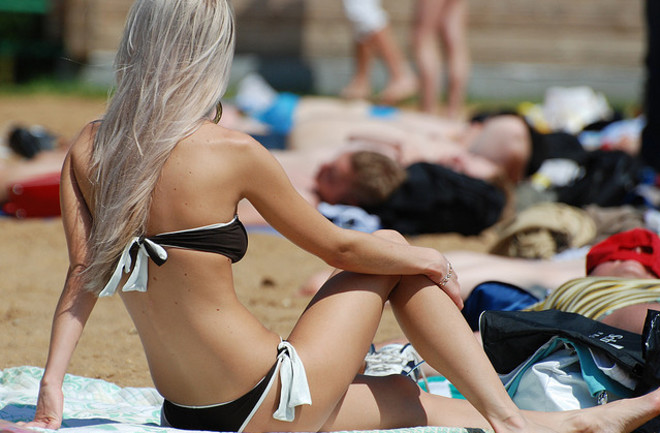 Photo: flickr/akrasIn this study, researchers tested whether men's ratings of women's attractiveness varied from season to season. They found that men rated the same images as more attractive in the winter compared with the summer. The authors hypothesize that the difference is due to the so-called "contrast effect" - basically, men are used to seeing women's bodies more in the summer, and therefore have higher criteria for attractiveness. So there you have it -- if you want to look better in a bikini, all you need to do is wear it in the winter! Men's attraction to women's bodies changes seasonally. "Humans exhibit seasonal variation in hormone levels, behaviour, and perception. Here we show that men's assessments of women's attractiveness change also seasonally. In five seasons (from winter 2004 to winter 2005) 114 heterosexual men were asked to assess the attractiveness of the same stimuli: photos of a female with three different waist-to-hip ratios; photos of female breasts, and photos of average-looking faces of young women. For each season, the scores given to the stimuli of the same category (body shape, breast, and face) were combined. Friedman's test revealed significant changes for body shape and breast attractiveness assessments across the seasons, but no changes for face ratings. The highest scores for attractiveness were given in winter and the lowest in summer. We suggest that the observed seasonality is related to the well-known 'contrast effect'. More frequent exposure to women's bodies in warmer seasons might increase men's attractiveness criteria for women's body shape and breasts." Related content: NCBI ROFL: The presence of an attractive woman elevates testosterone and physical risk taking in young men.NCBI ROFL: Endometriosis: hot or not?NCBI ROFL: Stressed-out men prefer heavier women.