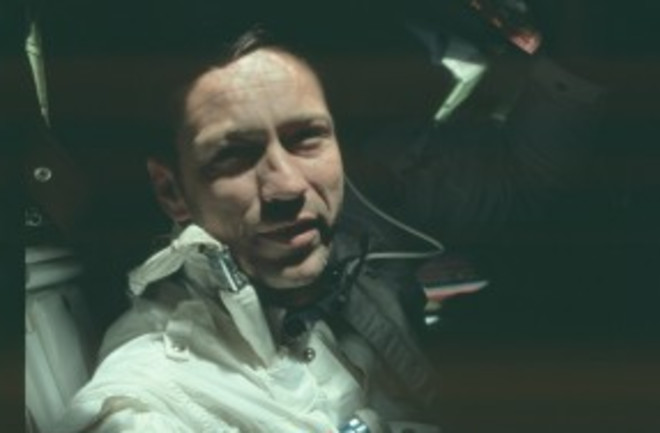 Donn Eisele on board Apollo 7. NASA.

There are some astronauts we know a lot about, or at least whose names are familiar, like Neil or Buzz (as in Armstrong and Aldrin, the first men on the Moon). More nerdy space fans will also recognize the names Gene and Pete (as is Cernan and Conrad). But what about Donn, is Eisele? Donn Eisele — whose last name is pronounced Eyes-lee, not Eye-zell — is a fascinating character who flew on the first Apollo mission but most people have never heard of him.

Like all his peers, because NASA’s astronaut qualifications were pretty rigid in the 1960s, held a Bachelor of Science degree from the US Naval Academy, a Masters of Science in Astronautics from the Air Force Institute of Technology, and flight experience at the Air Force Aerospace Research Pilot School at Edwards Air Force Base when he joined NASA as part of its third class of astronauts in October of 1963.

Earmarked as an Apollo astronaut, he was assigned to the crew of Apollo 1. The mission was meant to be a shakedown cruise, an Earth-orbital test flight of the non-lunar Block I Apollo command module. But in training for the mission he dislocated his shoulder twice and was forced to undergo surgery. And though he was expected to make a full recovery he wouldn’t be fit to fly the first mission. He traded places with Roger Chaffee and became the Command Module Pilot of Apollo 2, the second and final Block I test before NASA would get into flying the lunar-capable Block II spacecraft.

This plan for Eisele and NASA went out the window when the Apollo 1 crew, Chaffee along with Gus Grissom and Ed White, were killed during a fire on the launchpad during a routine test. Eisele and his crewmates on Apollo 2, Commander Wally Schirra and Lunar Module Pilot Walt Cunningham, were reassigned to Apollo 7, the new first manned Apollo mission.

The flight was a stunning success but is best remembered for the crew’s disobedience. Schirra came down with a head cold in space, which soured his mood, and both Cunningham and Eisele fell in step with their commander. After they landed, flight directors swore none would ever fly again and they didn’t.

More than head colds Eisele might be best known for his divorce. Not long after the Apollo 7 flight he left his wife, Harriet, for his girlfriend Susie, to whom he stayed married for the rest of his life.

Eisele died suddenly in 1987. He succumbed to a heart attack in his sleep while on a work trip in Japan. And though he was traveling with his former Chief Astronaut Al Shepard, he didn’t do anything to help get the body home. Susie Eisele was left to figure it out on her own, ultimately having her late husband cremated and flown home. His remains are buried in Arlington Cemetery.

He left behind his unfinished memoirs that my friend and author Francis French cleaned up and published into a new memoir, which gets into the nitty gritty of his time with and after NASA. For your chance to win a signed copy check out my latest video on Vintage Space for the terms of the giveaway!