Meet the Volcanologist Running for Congress 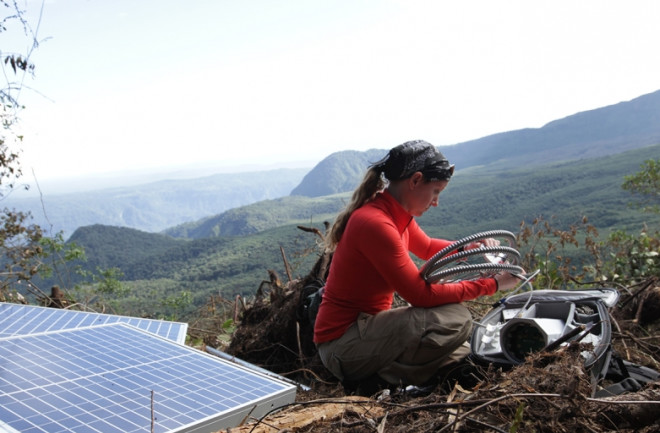 Jess Phoenix, a volcanologist and Democrat running for the US House, doing field work. It is always exciting (to me) when a scientist runs for public office -- and doubly so if that person is a geologist. There have been a few geologists who made waves as politicians, including Colorado governor John Hickenlooper (we'll leave you to sort out Secretary of the Interior Ryan Zinke's claims of "being a geologist"). Now, imagine if that person was also a volcanologist. Now you really have my attention. That's Jess Phoenix, a Democrat running for the U.S. House of Representatives in California. I had a chance to ask Jess a few questions about her career, her decision to run and science's role in government. Check out what she had to say below about what a volcanologist can bring to Congress. . What did you study in your volcanic life? Lava flow morphologies & volcanic hazards (with an emphasis on mapping). [Note from Erik: You can read another profile of Jess in this Earth magazine article to get into some of the details] What inspired you to make this change, from a volcano researcher to candidate for the House of Representatives? With the election of Donald Trump and the realization that my Representative, Steve Knight, has said that California's preparations for climate change are "foolish," I realized that the best person to replace a science denier who sits on the House Science Committee is an actual scientist. You need to bring facts to fight fiction. You’re trained as a volcanologist and now you’re running for Congress. Tell us about transferrable skills. Working in a scientific field that's primarily concerned with public safety gives me training in the objective processes of the scientific method and the communication skills to deliver critical information in an easy to understand, accessible way. Plus, the creative problem-solving skills you learn on field expeditions will come in handy when dealing with the diverse array of issues confronting members of Congress! Senators Murray and Murkowski have been pushing the modernization of the US volcano monitoring network for years. What would it take to get this funded in Congress? A much louder, and urgent voice will go a long way. There's no better ambassador for science funding than a scientist whose work has been threatened by budget cuts. Also, I will be working to sit on the House Science Committee, which will help tremendously with that goal. What is the state of science in the United States today? How do you think we got here? The United States is at a turning point in its scientific history. If we do not push for a stronger voice for science both in government and our culture, we may see a permanent divergence between scientists and everyone else, and that is a troubling thought.

Jess Phoenix at the March for Science, 2017. What role should the federal government have in funding science? The government is the primary funder of scientific research in our country. As such, every administration makes a political statement when it decides what research to fund. I am a firm believer that the government should listen to and hire scientific experts to create realistic budgets for the various scientific research programs our country engages in. How is science being used and misused in government? These days, science is being ignored and repressed by our government more than it is being used or misused. Science is clearly not free of problems: harassment, bias, inequality. What could Congress do to help solve these problems? Congress can help with allocating funds for programs designed to help promote women and traditionally under-represented communities in the sciences. Congress can also help with promoting more diversity in the sciences by connecting with more diverse scientists and inviting them to speak in front of Committees or serve in government positions. What would be the first thing you’d tackle on the science front if you were elected to Congress? I would restore funding for earth science and climate research that has been stripped by the Trump administration. How can we convince other scientists and science-minded people to take a role in politics, especially considering how toxic of an environment it seems? We must continue to highlight the dire consequences of a silent scientific community, whether that means less money for research or global consequences of ignoring scientists on issues like climate change or contagious diseases. It is only through our silence that we lose the power to effect change.