An upcoming NOVA/National Geographic documentary showcases Spinosaurus, one of the largest carnivores to ever live. 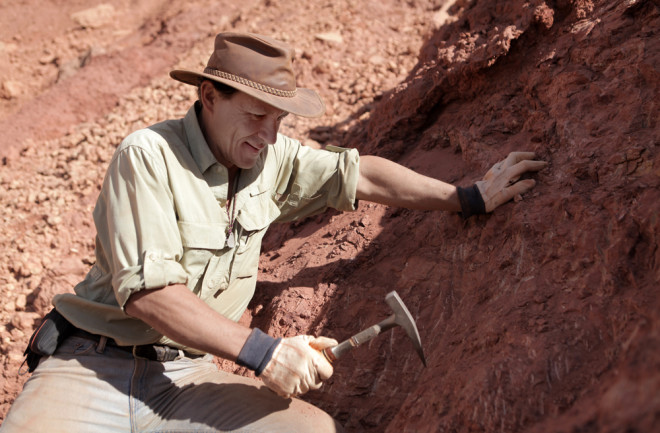 University of Chicago's Paul Sereno at a recent Spinosaurus dig in Morocco. | WGBH

An ancient treasure destroyed by Nazi arrogance, check. A bevy of exotic locales, from the plazas of Italy to the barren sand and rock of the Sahara, check. A charming and resourceful hero in a brown fedora, check.

No, it’s not the latest entry in the Indiana Jones franchise; it’s a true science story that rivals any action-adventure flick Hollywood could create.

University of Chicago's Paul Sereno at a recent Spinosaurus dig in Morocco. | WGBH

“Bigger Than T. rex” showcases Spinosaurus, which lived about 100 million years ago and, at 50 feet from nose to tail, was one of the largest carnivorous dinosaurs. It was also one of the oddest, with its long, narrow snout, curious flat feet and a massive sail that rose eight feet along its spine. For decades, the animal’s Frankenstein-like appearance perplexed researchers.

The story of the first partial Spinosaurus skeleton — and the second — is equally intriguing.

More than a century ago, German paleontologist Ernst Stromer described Spinosaurus based on several bones from a single animal found during an expedition deep in the Sahara.

The unique fossil was displayed in a museum in Munich for years, despite Stromer’s pleas to store it somewhere safer during World War II. In April 1944, the fossil was destroyed in an Allied bombing raid. Spinosaurus lived on only in Stromer’s meticulous drawings and a handful of grainy photographs. As the study of dinosaurs advanced, Stromer was nearly forgotten and his great find fell, as one paleontologist says during the NOVA program, “into the same category as Nessie or Sasquatch.”

Fast-forward to the present and German-Moroccan doctoral student Nizar Ibrahim, who felt a special affinity for the unheralded German paleontologist and the lost Saharan dinosaur. Ibrahim combs the semi-legal fossil markets of Morocco and scours layers of banded sandstone poking up from the desert’s expanse. A tip from an Italian colleague puts him on the trail of a potentially huge Spinosaurus find, but first he’s got to sweet-talk a skittish fossil hunter who insists on wearing a disguise.

Ibrahim, together with University of Chicago paleontologist Paul Sereno, find their holy grail of dinosaurs: a second partially complete Spinosaurus. Armed with scanners and software that Stromer couldn’t have imagined, the team is able not only to build a digital model of unprecedented detail, but also to piece together how this Frankensteinosaurus lived.

Fossilized bivalves and sea urchins found with the new Spinosaurus provide a key clue that’s backed up by comparative analysis of its anatomy, including those weirdly flat, almost flipper-like feet and crocodilian snout: The mighty Spinosaurus was aquatic, the first dinosaur so described.

It’s a triumph of science that Dr. Jones would have given a hat tip.