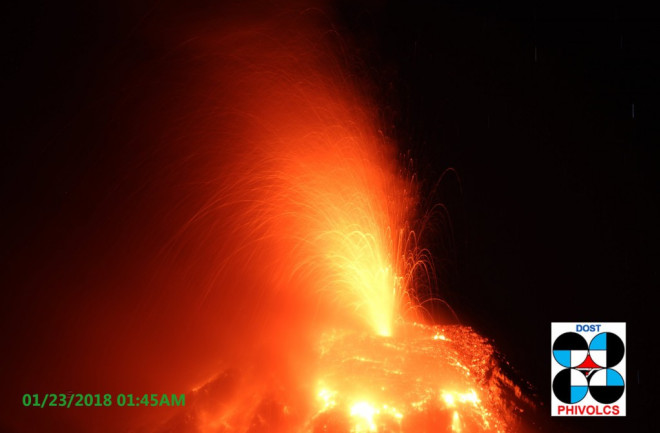 Lava fountain from the summit crater of Mayon in the Philippines seen on January 23, 2018. This lava fountain is likely a few hundred meters tall. PHIVOLCS. In the Philippines, Mayon is erupting spectacularly, creating a lava flow that stretches over 3 kilometers (2 miles) from the crater, 600-meter lava fountains, pyroclastic flows that followed gullies for 5 kilometers (~3 miles) from the summit and explosions that are sending ash and volcanic debris over 3-5 kilometers (10,000-15,000 feet) into the air. Videos (below) show ash plumes and glowing debris spewing from the crater during these blasts and lava fountaining episodes. It's a notably strong increase in activity since the Mayon began erupting last week.

Cauliform ash plume reaching thousands of meters over Mayon in the Philippines, seen on January 23, 2018. Pyroclastic flows can be seen on the center of the image just underneath the white cloud deck. PHIVOLCS. At this point, over 56,000 people have evacuated from the area near the volcano due to the threat of ash and pyroclastic flows from Mayon. Of these hazards, pyroclastic flows are the most immediate danger to people living near the volcano. Philippine officials have been imploring people to leave the 8-kilometer, no-go zone around Mayon and not return until it is safe. They are going so far as to request power and water to be shut off to these towns to keep people out. The ash fall from these eruptions is also dangerous, and over 30,000 dust masks have been distributed so far, but more aid is needed.

The vigor of these eruptions means PHIVOLCS has put Mayon on alert level 4 (of 5). It would take a sustained eruption, rather than Mayon's current fits and starts, for a 5 alert. Still, PHIVOLCS volcanologists are concerned

that larger eruptions could follow. Measurements of the volcano

show that it is inflating, suggesting a continued input of magma into Mayon, feeding these eruptions.

The grey ash plume and a thermal hot-spot from lava within the crater could be seen clearly on the January 22, 2018 MODIS image

from NASA's Aqua satellite (below).

The dark grey ash plume and red thermal anomaly at the summit of Mayon, seen on January 22, 2018. NASA - Aqua. One thing repeat here: Eruptions at Mayon and Kusatsu in Japan

, along with the earthquake off Alaska,

are in no way directly connected. They are all produced via Earth's plate tectonics, but they are not indication that one event "triggered" the others. Anyone saying otherwise is selling you pseudoscience and nonsense.