Maybe Next Time: Barnard’s Star B is Likely Uninhabitable 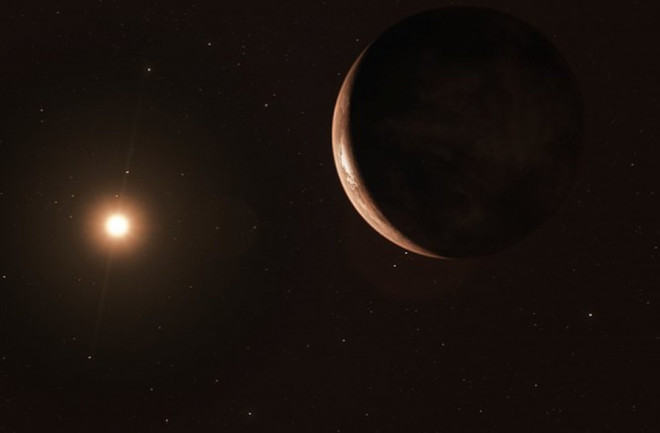 An artist's interpretation of what Barnard's star b, a super-Earth recently discovered just six light-years from Earth, may look like. (Credit: ESO/M. Kornmesser)

Put on your friendliest face and say hello to the newest member of our planetary neighborhood: Barnard’s star b.

An international team led by researchers from the Carnegie Institution for Science announced today that they’ve detected an exoplanet orbiting Barnard’s star, the closest single star to Earth at just six light-years away. The astronomers calculate the newfound world, dubbed Barnard’s star b, to be about 3.2 times the mass of Earth and to orbit its host star once every 233 days. The so-called super-Earth is the second-closest known exoplanet, trailing just behind Proxima Centauri b at a mere 4.2 light-years away, and that could make it an exciting place to look for life.

But unlike Proxima b, which shows promising signs of habitability, Barnard’s star b is likely inhospitable to life as we know it.

Barnard’s star is a cool, low-mass red dwarf that’s estimated to be at least twice as old as our Sun, with some calculations putting it at 12 billion years old. Consequentially, the dim, ancient star only emits about 0.4 percent of the energy that the Sun does, providing little warmth to its surrounding environment.

Using ESO’s High Accuracy Radial velocity Planet Searcher (HARPS) and Ultraviolet and Visual Echelle Spectrograph (EVES), the research team found that Barnard’s star b orbits about 60 percent closer to its host star than Earth does to the Sun. But despite its snug proximity, the planet still sits beyond the chilly star’s “snow line” — the region where water and other volatiles start turning into ice. At this distance, the planet only receives about two percent of the energy that the Sun gives to Earth, putting its surface temperature at a frigid -340 degrees Fahrenheit (-170 degrees Celsius).

“The temperature of the star relative to the orbit of the detected planet means that it likely does not have surface liquid water, which is a prime characteristic for deeming a planet even potentially habitable,” said Johanna Teske, a NASA Hubble Postdoctoral Fellow at Carnegie and co-author of the study’s paper, published today in the journal Nature. “A planet in the ‘habitable’ or surface liquid water zone of Barnard’s star would have a period between 10 and 40 days, much shorter than the detected planet at 233 days.”

On top of the planet’s icy nature, the actions of its host star could also be a threat to life. It isn’t uncommon to see solar flares blasting out of red dwarfs during their younger and middle-aged years, but witnessing one shoot out of an older one is quite rare. Back in 1998, though, astronomers saw a powerful flare erupt from Barnard’s star, causing its temperature to soar from about 3,100 kelvin to at least 8,000. Such flares likely contain hefty amounts of X-ray radiation, and it’s not clear whether Barnard’s star b has an atmosphere to protect it from them.

Not Written Off Yet

Just because the new world is likely inhospitable, that doesn’t mean we can’t use it to better understand the universe. Being in such close proximity to Earth, we could potentially use Barnard’s star b to learn about other exoplanets that orbit red dwarfs, which are the most common type of star in the Milky Way.

But while probing our new neighbor sounds like the obvious next step, it might not be easy, or even possible any time soon.

“I think the most useful study would be direct imaging observations of reflected light from the planet, to assess its surface composition and/or whether it has an atmosphere,” said Teske. “These would be very challenging observations, though, only possible with next-generation space-based telescopes and instruments. But this would be a great target for those missions!”

The odds of finding life on Barnard’s star b look pretty bleak for now, but with upcoming missions like the James Webb Space Telescope, we might be surprised at what we find. After all, some scientists think that we should actively look for life below the frozen surfaces of planets and moons. We’ve discovered life in some of the most frigid places on Earth, so who’s to say it couldn’t exist beneath the frozen exteriors of Mars, Europa or Barnard’s star b?