Math anxiety is a global phenomenon. Researchers are probing its effects on classrooms and the workforce, with a focus on STEM skills. 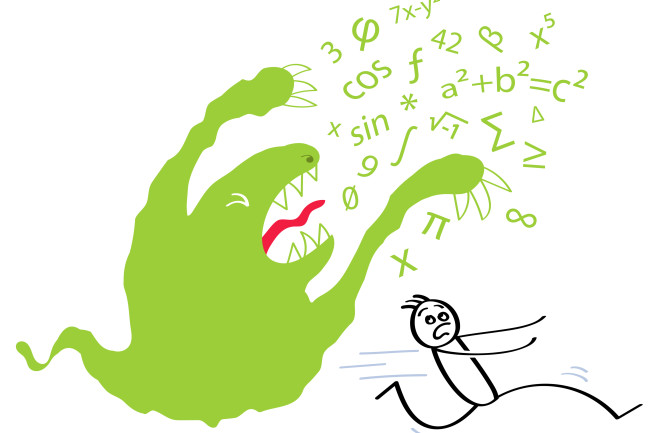 Beyond the classroom, most adults never have to sweat reciting the Pythagorean theorem from memory, much less put such an equation to use in daily life. But what about calculating your tip on a dinner bill — without a calculator? This scenario is a bit more plausible in daily life. And if it elicits some anxiety within you, well, you’re in good company.

Math anxiety has been described as the “feeling of tension, apprehension or even dread that interferes with the ordinary manipulation of numbers and the solving of mathematical problems.” That means the presence of anxiety itself, often accompanied by intrusive thoughts or doubts, can inhibit your mental processing regarding arithmetic, even if you have a handle on the math skill. Physical symptoms can include increased heart rate, clammy hands, upset stomach and lightheadedness.

This anxiety, it turns out, is prevalent around the globe. Multiple studies over the years have explored the phenomenon in young students and classrooms; and some have identified how it impacts adults, too. A recent paper expanded its lens to more than 1 million students in 60-plus countries. It adds to a research area that’s been gaining momentum alongside the global push toward STEM (science, technology, engineering and math) skills in education and the workforce.

Among the potential implications of this work: Managing anxiety (or eliminating it) in the classroom may improve math proficiency and performance just as much as boosting training in technical skills. This aligns with the idea that anxiety, or feelings of tension, can often pose a negative influence on working memory.

A 2012 study even used MRI imaging to examine brain activity and shifts in individuals as they anticipated performing math activities. The researchers at the time called it the first evidence in cognitive neuroscience to support the pursuit of educational methods that reduce math anxiety — rather than just focusing on math training in the classroom.

To this end, researchers at the University of Western Ontario last month published an expansive study on math anxiety, evaluating data and achievement results from nearly 1.2 million students around the world. The new research bolsters various ideas already circulating about the nature of math anxiety, particularly emphasizing its multilevel influences and contributing environmental factors.

Led by postdoctoral researcher Nathan Lau, the team found that one reliable indicator of math anxiety is a student’s perception of competence in their teacher. This means that improving the quality of teaching might have an impact on anxiety levels in students, though the study stopped short of predicting the correlation, since it's unclear how exactly teaching quality shapes student perception. The team adds that future experiments would be needed to further those findings.

This new work also points to the relevance of teacher confidence. The researchers concluded that an instructor’s high confidence in teaching math seemingly limited the negative effects that math anxiety had on math achievement. And in another variable, the frequency of homework assigned also appeared to impact anxiety levels in students.

While Lau’s findings, like much of the research in the field, focus on children or student populations, math anxiety likely doesn't stop at the classroom. In fact, most English-speaking U.S. adults experience mild to moderate levels of math anxiety, according to a notable study of 1,000 participants published in the Journal of Numerical Cognition in 2019.

Considering such a broad scale, the dinner gratuity scenario above is merely the tip of the iceberg when it comes to how math anxiety might influence our lives. One U.K. study, for example, indicates how this "mathematics problem” can inform individual career choices and recruiting of apprentices, therefore influencing the demographic balance of workforces across industries.

Continued studies on the matter are sure to illuminate other ripple effects and trends — and, hopefully, some effective ways we can all collectively gain some confidence in our math skills.