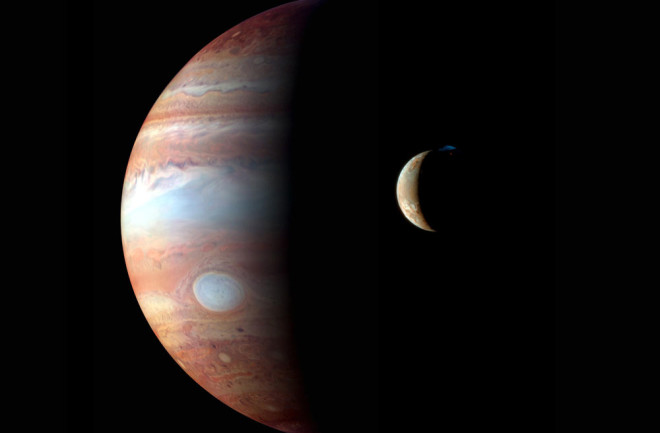 This montage of images shows Jupiter with its volcanic moon Io in the foreground. The images were captured in 2007 during New Horizons' flyby. (Credit: NASA/Johns Hopkins University Applied Physics Laboratory/Southwest Research Institute/Goddard Space Flight Center) On Jupiter's moon Io, a huge lava-filled basin is home to dual tidal waves that regularly sweep across its surface. The Loki Patera is a lake of molten rock some 8,300 square miles in size with a large island in the center, first imaged by the Voyager spacecraft that flew by Jupiter in 1979. Periodic swings in brightness, imaged both by spacecraft and Earth-based telescopes indicated that something was disturbing the surface on a semi-uniform basis.

Io is an extremely geologically active world, in a constant gravitational tug-of-war between Jupiter and its three other large moons which exert enough force to spur eruptions and seismic events on its surface. Loki Patera is just one of these features, although its distinct behavior makes it all the more interesting. A team led by researchers from the University of California, Berkeley shed additional light on the mystery by taking advantage of a fortuitous eclipse of the moon by its sister Europa. Because icy Europa is much darker as imaged in infrared, it blocked out light from Io, allowing the researchers to observe minute changes in the brightness of Loki Patera as the edge of the moon slid over and past the lava basin. https://www.youtube.com/watch?v=GiUp91Ybciw

Using the Large Binocular Telescope Observatory in Arizona, the researchers mapped the temperature of the basin and found that it changed in a predictable way. Writing Thursday in Nature, they describeobserving a line of the hottest lava and then a sheet of molten rock that grew cooler further from the line. They interpret this to be the result of a wave that comes through and overturns the thin crust built up on the surface, exposing fresh, hot lava. The wave begins at one end of the lake and sweeps around the central island as two separate arms before meeting again on the far side. The whole process takes a bit more than 20 days. Don't plan on lava surfing there though. It's less of an ocean wave, though, they say, and more an overturning of the lava crust. As solid rock builds up on the liquid lava, it eventually gets too heavy and sinks beneath the surface. This event propagates outwards, forming a wave that proceeds at a speed of just over half a mile a day. The southern wave appears to both start later and move faster, which the researchers explain as the result of differences in the composition of the lava crust, perhaps caused by gas bubbles that make the northern half less dense. What kicks off the wave, and why it begins where it does, are still unknown. The researchers hope to glean new information about the lake with further imaging, in addition to looking for similar waves on other lakes.