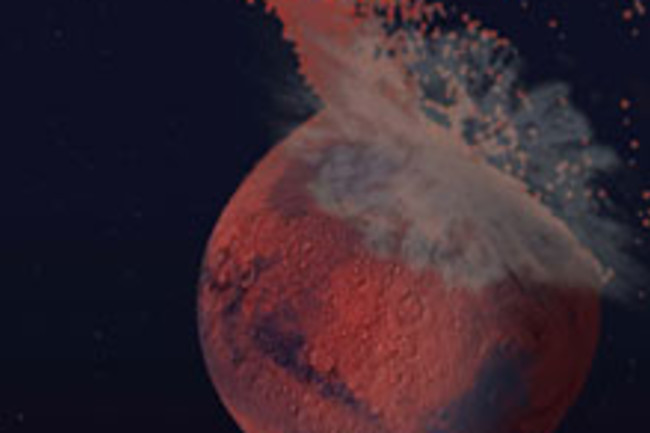 They call it the Mars dichotomy, or say that the planet is "two-faced." Researchers have known for decades that the Red Planet is divided between smooth, low-lying plains in the north, and craggy, cratered highlands in the southern hemisphere. Mars orbiters have also confirmed that the planet's crust is thinner in the north. Now, a new study offers an explanation for this strange phenomenon: Around 4 billion years ago, an enormous asteroid smashed into Mars and changed the character of its northern half.

"This impact is really one of the defining events in Mars' history," said [study co-author] Jeffrey Andrews-Hanna.... "More than anything this has determined the shape of the planet's surface" [USA Today].

Scientists proposed the idea of a massive Martian impact in the 1980s but could find scant evidence for the hypothesis. For the new study in the forthcoming issue of Nature [subscription required], researchers analyzed topographical data and assembled a map of what the Martian surface would have looked like before volcanoes poured new lava onto the plains. The map revealed

that a giant basin that covers about 40 percent of the surface of Mars, sometimes called the Borealis Basin, is actually the remains of a colossal impact very early in the solar system’s formation, measuring about the size of the combined area of Asia, Europe and Australia [Telegraph].

Two other studies that will be published in the same issue of Nature add to the evidence; they used computer modeling to determine where an asteroid could have hit and how large it could have been. The two studies

independently concluded that the impactor had to be between one-tenth and two-thirds the size of the moon to create Mars’ two-faced surface [Science News].

The new work adds to a body of evidence that has built over the past two decades about how the Solar System today was shaped by a vicious bombardment by space rubble. One idea is that the youthful Earth was once hit by a Mars-sized planet, which smashed a piece of our crust into space. Captured and then smoothed by Earth's gravitational pull, this material evolved into the Moon, according to this hypothesis. "The early Solar System was a very dangerous place to be a planet," says Andrews-Hanna. "But without those impacts, we wouldn't have the planets as we know them today" [AFP].