I'm back from the Beyond Belief II conference at the Salk Institute in La Jolla, which packed an extraordinary amount of intellectual stimulation into a few short days. Any conference where you wander into the opening reception, get drawn into a conversation about reductionism and meaning with Stuart Kauffman, Rebecca Goldstein, and Sir Harold Kroto, and end up closing down the bar, is bound to be a good one, and this did not disappoint. (The title notwithstanding, much of the conference had little to do with atheism or religion -- the subtitle "Enlightenment 2.0" gave a better flavor.) The talks provided fodder for at least ten to twenty blog posts, of which I'll probably get around to writing one or two. One of the talks was by local neuroscientist V.S. Ramachandran, or "Rama" to his friends. (Like any good neuro person, his web page includes a fun collection of optical illusions.) He talked about his experiments with synesthesia, the phenomenon in which people see graphemes (e.g. numbers or letters) as associated with colors. I do that a little bit -- five is certainly yellow, seven is red, and eight is blue -- but it's closer to a vague association than a vivid experience. Some people report very strong synesthetic reactions, and for a long time researchers have wondered whether the experience was mostly metaphorical or something stronger. 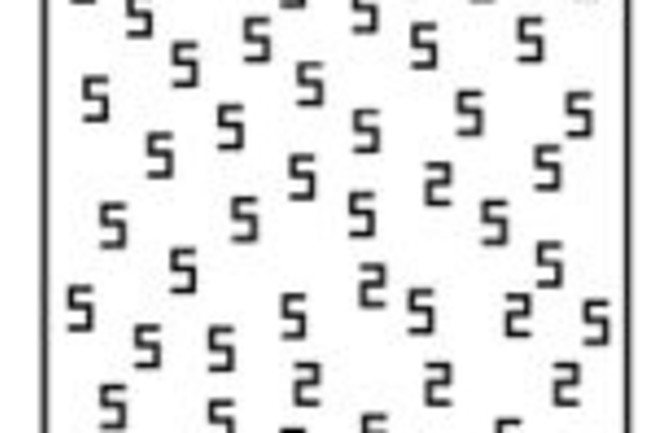 To test synesthesia, Rama and collaborators designed an experiment where they could measure the vividness of the colors associated with the numbers 2 and 5. They chose those because you can make them look almost identical, although reversed, by choosing a boxy font. Then they made up a picture (on left) of mostly fives, with a few twos scattered within there. Then they asked people to pick out the twos. Most ordinary folks could do it within about twenty seconds or so. 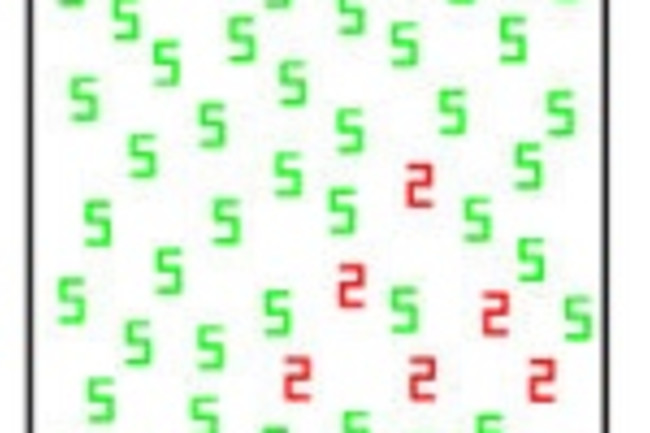 But true synesthetes could do it immediately. That's because to them, the twos popped out as a brightly colored triangle (right). This established beyond much doubt that synesthesia was "real," and more particularly that was a measurable phenomenon with real consequences. This, in turn, strengthened the hypothesis that the origin of synesthesia was to be found in the structure of the brain. Indeed, it turns out that the region of the brain responsible for processing graphemes lies adjacent to the region responsible for processing colors. 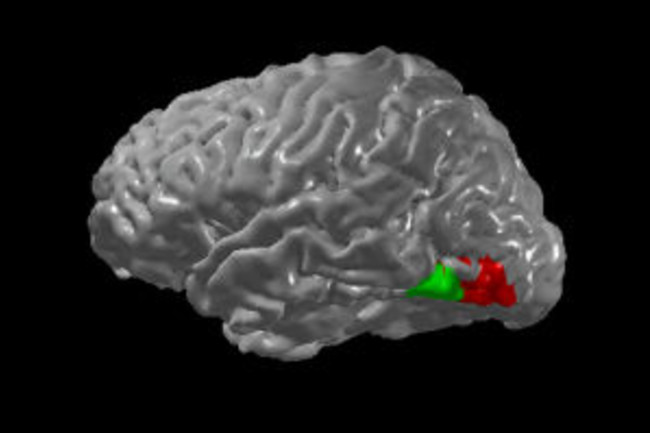 It's fairly easy to imagine that small alterations in "normal" brain wiring -- strengthening some pathways, inhibiting others -- could be responsible for synesthesia. To test this idea further, Rama had synesthetes look at alternative representations of the numbers -- using Roman numerals, for example -- and found that the colors did not appear. That's perfectly consistent, as the relevant bits of brain are responsible for processing the graphical representation of the number 5, not the abstract mathematical concept of "five." Further studies using functional magnetic resonance imaging have found that the brains of synesthetes and non-synesthetes really do light up in different ways when they look at numbers. (There are other ways to be synesthetic -- associating colors with sounds or smells, for example -- which may also be traced to connections between different parts of the brain.) But then here's my favorite part. They found a synesthete who was color blind. That may seem strange, but what it really means is that the subject had problems with his retina that left him able to distinguish only an extremely narrow range of wavelengths when looking at most images in the world -- his brain was fine, but his eyes weren't quite up to the job. But when he saw certain numbers, he experienced colors that he otherwise never saw. Here is Ramachandran in Scientific American:

We also observed one case in which we believe cross activation enables a colorblind synesthete to see numbers tinged with hues he otherwise cannot perceive; charmingly, he refers to these as "Martian colors." Although his retinal color receptors cannot process certain wavelengths, we suggest that his brain color area is working just fine and being cross-activated when he sees numbers... The effect is most obvious and pronounced in the colorblind synesthetes, but occurs in "regular" synesthetes as well. The colors evoked by cross activation in the fusiform gyrus "bypass" earlier stages of color processing in the brain, which may confer an unusual tint to the colors evoked. This is important for understanding the phenomenon of synesthesia, because it suggests that the qualia label--that is, the subjective experience of the color sensation--depends not merely on the final stages of processing but on the total pattern of neural activity, including earlier stages.

Martian colors! How awesome is that?