Martian Chemical May Put Slight Doubt on Possibility of Life 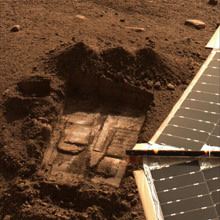 A week after confirming that the Mars Phoenix Lander had discovered ice in the Martial soil, NASA scientists announced that it may have uncovered something else—perchlorate, a type of organic salt that had never been found on Mars before. At a press conference on Tuesday, researchers said the find raises a number of questions about Martian geochemistry, particularly about the flow of water on the planet. But they said its discovery will likely have little bearing on the key question of whether or not Mars might be able to host life [New Scientist]. Some had worried that the presence of perchlorate would preclude the possibility of life on Mars because these chemicals are hazardous to humans and many other animals. But they aren't dangerous to all life; in fact, certain organisms depend on them—in Chile's Atacama Desert, some microbes use oxygen from naturally occurring perchlorate for energy [Science News]. Though NASA scientists still have doubts about the finding—their analysis isn't finished, and they haven't ruled out that the perchlorate came from the Phoenix's rocket boosters—they held the press conference in response to swirling online rumors that the Phoenix Lander had found something big, and scientists had briefed the White House. Soon speculation was running rampant on the Web, which prompted "an unusual step and a break with scientific tradition," as Phoenix principal investigator Peter Smith of the University of Arizona, Tucson, put it on today's press teleconference [Science]. And though perchlorate on Mars wouldn't rule out the possibility of life, some scientists still see it as a bad sign. "Perchlorate is not a particularly nice thing to find in the soil," said astrobiologist Kenneth Nealson of the University of Southern California. "No one hunting for life would be happy to see it in any sort of abundance. Although some microbes on Earth thrive on perchlorate, "it is not a molecule of choice for most life." [AP]. Image: NASA/JPL-Caltech/University of Arizona/Texas A&M) Related Posts: Mars Phoenix Lander Gets Its First Taste of Martian IceMartian Soil Could Grow AsparagusIt's Official: There Is Ice on MarsMars Phoenix Still Looking for That First Ice CubeMars Lander Fumbles Soil SampleA Healthy Mars Lander Gets to Work

The SciencesAstronauts Get Sick, Too. Here's the Tech That Could Grow Medicine on Mars
Recommendations From Our Store