Mars: Wetter Than Ever

NASA finds evidence of bursts of liquid water on the Red Planet. 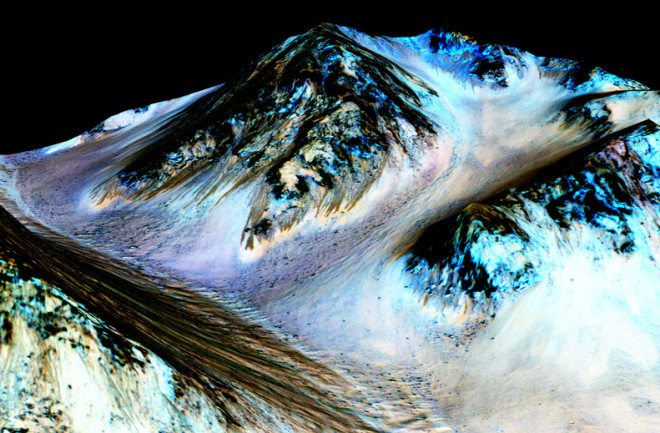 Mars was a major disappointment, at first. Although the planet had been long seen as the home of elaborate alien civilizations imagined by the likes of H.G. Wells, NASA’s 1965 Mariner 4 probe glimpsed a dry and cratered place unlikely to support life. Each subsequent mission to the Red Planet, however, has found a slightly wetter world. And we now know that saltwater ice lurks just below the surface, occasionally breaking through as liquid water.

In September, NASA announced evidence that when the warm season strikes, the briny substance briefly bursts above Mars’ sandy slopes, flowing as liquid for hundreds of feet in narrow streaks. The agency’s Mars Reconnaissance Orbiter picked out the chemical fingerprints of hydrated minerals there, the first direct evidence that liquid water can still exist on the surface under certain circumstances, though years of evidence had implied as much.

In recent years, MRO has also revealed vast glacial deposits. These belts wrap around the planet’s central latitudes in the northern and southern hemispheres, hidden beneath a thick layer of dust that protects them from the sun. In 2015, researchers from the Niels Bohr Institute in Copenhagen, Denmark, modeled these glaciers using MRO radar measurements and showed that, if melted, their water could cover the entire Red Planet in a sea 3 feet deep. Aside from stoking hopes that Mars might nurture microbial communities, the deposits could also provide crucial water supplies for any future human visits.

And MRO wasn’t alone in its watery finds in 2015. NASA’s eyes on the ground — the Curiosity rover — found clues that liquid brine could also lurk just beneath its wheels at night. The craft’s weather instrument recorded temperature and humidity levels that would likely result in saltwater formation, albeit in amounts and temperatures unfavorable to life.