No forests or rats in there — but those eye-catching images of Mars terrain do have some alien messages for us. 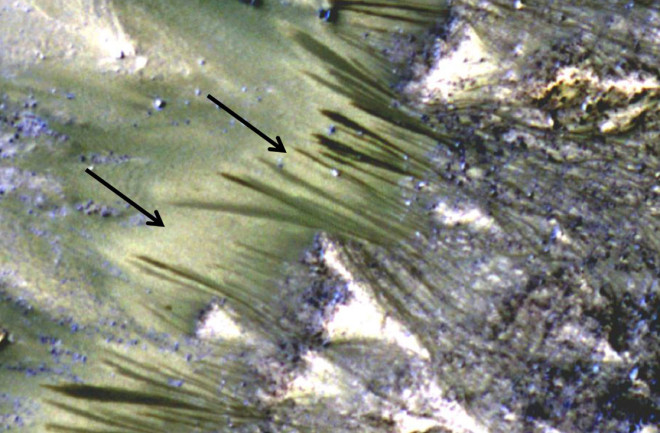 The orbiting HiRISE camera captured these seasonal flows, which sure look like flowing water. | NASA/JPL-Caltech/University of Arizona

When you get a letter from a legendary science fiction author, you stop and take notice. When the letter claims that NASA space probes have spotted enormous forests on Mars and requests an investigation, you really take notice, though maybe not the way the writer had in mind.

That happened to me a few years ago when I opened my email to find an earnest exposé from Arthur C. Clarke, author of 2001: A Space Odyssey. He included links to images from NASA’s Mars Global Surveyor (the most advanced Mars orbiter at the time), showing vistas that really did resemble thick stands of giant trees. Clarke died in 2008, but ever since, I’ve been keeping tabs on the visual oddities of the Red Planet — and there is no shortage of them. In the past few years, Mars fanatics have identified objects that look like rats, rabbits, lizards, even a mermaid sculpture. Clarke’s forests still have their fans, too.

Just to get the obvious out of the way: No, scientists are not hiding the discovery of life on Mars. Jim Bell of Arizona State University, one of the lead researchers running the Curiosity rover’s color camera, laughs off the notion that he might be part of a conspiracy. “My colleagues and I, we would be at the front of the parade if we discovered a dinosaur bone or a tiny lizard on Mars,” he says. “It would be the most spectacular discovery in the history of science. Why the hell would we cover it up? Come on!”

Bell also sees a serious side to those whimsical sightings. “The first impression I get from the Mars pictures is that the place looks familiar. Then I take a closer look and realize, wow, this place is fundamentally different. We see crazy protrusions and weirdly carved surfaces, almost Dr. Seuss-like — things that tend not to get preserved [permanently] on Earth,” he says. The juxtaposition of exotic-looking forms in an ordinary-looking setting gets the mind going, “and of course, as humans, we like to see faces and people and structures and geometric forms all over the place.”

Such perceptual biases (technically known as pareidolia) can be misleading, but for planetary scientists they are also quite useful. The eye’s tendency to latch onto visual oddities makes it a sensitive tool for picking out the most distinctive aspects of the Martian environment, the sights that stand apart from the terrestrial norm. “We are learning how to look at Mars like an alien geologist,” like a researcher native to the Red Planet, Bell says. Doing so reveals a planet that may not contain life but that has, in its way, a life of its own.

The Red Planet abounds with geologic oddities. Here are some of our favorites (in no particular order).

2. Spiders from Mars - Escaping underground gas carves the ground into these spidery shapes.

3. The Flying V's - Sand, wind and topography created these figures.

5. Dust Devils - Dust devils leave tracks on Mars, just as they do on Earth.

6. Blueberry Spherules - “Blueberries,” ancient mineral deposits about an eighth of an inch wide, dot many areas.

7. Hole in Mars - This “skylight,” about 115 feet across, formed on the volcano Pavonis Mons when underground lava flows dried up, leaving the ground unsupported.

8. Brain Terrain - Even though we know they’re mostly water ice, these shapes can’t be explained by scientists.

Geologist in a Strange Land

One of Bell’s first alien lessons? Given the absence of rainfall or any evident biological activity, change on Mars happens slowly. Very, very slowly. “Often, the rover driving past is the most interesting thing that’s happened there in the past 2 billion years,” he says.

In such a quiet setting, subtle environmental processes can accumulate uninterrupted to produce enormous effects. One of the most important of these is erosion by fine bits of windblown dust, even though the Martian atmosphere is less than 1 percent as thick as Earth’s. “The dust grains are microns in diameter, cigarette-smoke size. Imagine blowing smoke at a rock; nothing is really going to happen,” Bell continues. “But blow smoke at a rock for a billion years? Dust and sand grains can carve canyons out of mountains — that’s a new thing for geology.”

Extreme temperatures, which routinely swing from zero degrees Celsius in the afternoon to minus 100 degrees at night (roughly from freezing to minus 150 degrees Fahrenheit), produce another alien effect. Intense thermal stresses open up fractures in rocks; over the eons, the mechanical breakdown from daily heating and cooling can reduce boulders to piles of rubble.

Even meteorites are a significant part of the slow-mo Martian scenery; they show up as shiny and metallic outliers, resting largely undisturbed atop ruddy sand dunes. (NASA’s rovers have seen so many that mission scientists often drive by without a second look.) The net result is a cornucopia of exotic shapes, blank canvases for imaginative minds to perceive lizards and the like.

As much as Bell finds every detail along Curiosity’s path intriguing, he is “going a little batty” to keep rolling and visit one of the most spectacular showcases of Martian weirdness: Mount Sharp, a 5,500-meter-high peak at the center of Gale Crater. That peak is the primary destination of the rover’s $2 billion trek.

Pretty much everything scientistsknow about Mount Sharp comes punctuated with question marks. “We’re inside of a big hole in the ground — a crater created by an asteroid 4 billion years ago — and for some reason there’s a giant mountain in the middle,” Bell says. “The top of the mountain goes higher than the walls of the crater. How does that happen?” The mountain’s sides are layered, suggesting they are sediment deposited when the crater filled with water. (But where did the rest of the sediment go?) The upper parts of the mountain look more like deposits laid down by wind. (But why do they pile up there?)

The orbiting HiRISE camera captured these seasonal flows, which sure look like flowing water. | NASA/JPL-Caltech/University of Arizona

To Bell, the scene evokes the planetary history lesson written into the strata of the Grand Canyon on Earth — the familiar turned unfamiliar again, in true Martian style. “The layers are preserved like the pages of the Grand Canyon’s book, but they go from ancient Mars at the bottom of those layers up to modern Mars at the top, where dust is falling today,” he explains. “The watery part of the history, the most interesting part, happens shortly after the crater formed, maybe 500 meters up into that stack.”

If all goes well, Curiosity will start planting tread marks on the base of Mount Sharp by the end of this summer. As pictures and chemical readings start streaming in, Bell and other mission scientists will begin their comparative planetology. They will place the details of ancient, preserved Mars next to those of modern, recycled Earth, learning more about both worlds. Still, don’t expect the Red Planet to lose its air of mystery.

Barking Up the Wrong Tree

“What we have covered on Mars so far is a little over 1 percent of the surface. And we could well be missing things that we’ve already imaged, too, hidden in the data set,” Bell says. If you want some perspective on just how many oddities are still out there waiting to be discovered, Alfred McEwen is your man. From his office at the University of Arizona, he oversees the HiRISE camera on the Mars Reconnaissance Orbiter, which is compiling the most detailed atlas of the planet ever created.

Like Bell, McEwen sees a planet of deep time, where it is possible to observe a moment of a billion-year process. But from his high orbital perch, McEwen also sees the big-picture, restless, active side of Mars.

Mount Sharp, Curiosity’s primary destination, looms in this photo mosaic. Exactly how it formed and why it’s taller than the surrounding crater (as illustrated from elevation data) remains a mystery. | Top: NASA/JPL-Caltech/ESA/DLR/FU Berlin/MSSS; Bottom: NASA/JPL-Caltech/MSSS

The formations that excited Arthur C. Clarke are a perfect example. Clarke was right, up to a point. The “trees” really are fresh, dynamic structures; they just have nothing to do with biology. Rather, they are the result of the peculiar processes that unfold in a place cold enough that atmospheric carbon dioxide can freeze into snowy layers of dry ice. “There’s a seasonal carbon dioxide-defrosting landform that can look like giant banyan trees … if you buzz out the image enough,” McEwen says. “The way carbon dioxide defrosts, it’s translucent. Sunlight penetrates through it and warms up the dark material below. Pockets of pressurized gas then erupt, bringing dirt up, making some strange patterns.”

One mystery solved, but McEwen has plenty more. “There are all kinds of strange landforms at high latitudes,” he notes. Some of them seem to be the result of avalanches; some are called “brain terrain” for their undulating topography; some are simply categorized as mysteries on the HiRISE website. What has McEwen the most excited, though, are newfound markings that he calls “recurring slope lineae.” They are dark streaks running down the sides of Martian valleys, spreading and drying up, and they seem an awful lot like the result of flowing water.

As with all things Mars, the streaks may not be what they seem. The flows act as you’d expect from water seeping into the surface, “but there are two problems,” McEwen confesses. “We don’t know where the water comes from. How does it get replenished? And there’s no direct proof that it’s water at all.” Even with the rovers on the ground and multiple satellites overhead, nobody can get a measurement showing what the flows are made of. The most convincing evidence that they are water is that they look like water.

In the end, even McEwen is stuck with appearances and assumptions. But the more he and his compatriots approach Mars on its own terms, the closer they come to knowing the planet for real.

[This article originally appeared in print as "Weirdlands of Mars."]