Spacecraft have been both finding and not finding methane around Mars for years. 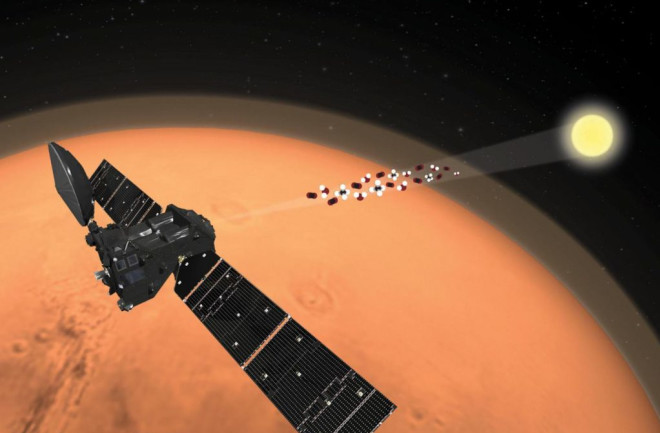 Last week, NASA’s Mars Curiosity rover detected a sudden spike in methane levels, which kickstarted excitement about the prospects of life on the Red Planet.

On Earth, the most common source of methane is biological organisms, from cows and humans down to single-celled creatures, making its detection on the Red Planet a reason for excitement and intrigue. But it’s quite possible to produce methane from non-biological reactions between water and rocks, so researchers are cautioning that the evidence as it stands doesn’t yet herald the presence of life on Mars.

This isn’t the first time a rover or orbiter has found methane on the Red Planet – indeed, earlier this year, NASA confirmed that both a rover and orbiter independently reported the same methane spike in 2013. The plumes have appeared and disappeared through the years, in tantalizing puffs that researchers have found difficult to study or even verify in many cases.

The most recent spike is larger than Curiosity has ever seen before. But NASA is still being cautious. “With our current measurements, we have no way of telling if the methane source is biology or geology, or even ancient or modern,” said Paul Mahaffy of NASA’s Goddard Spaceflight Center in a statement.

Mahaffy and his team are in charge of Curiosity’s Sample Analysis at Mars (SAM), a large suite of instruments attached to the rover. They quickly reconfigured Curiosity’s tasks for the weekend to try to better understand the methane seen just days ago.

On Monday night, NASA announced the weekend’s results: The methane spike had dropped sharply, to levels of less than 1 part per billion, a normal background level for Mars.

In the past, these plumes have also appeared and disappeared quickly, but that in itself can be a clue to researchers. The European Space Agency’s ExoMars spacecraft has failed to find any methane traces in the atmosphere, leading astronomers to suspect some previously unknown mechanism that can quickly remove methane from the skies. Researchers’ standard understanding of Mars’ atmospheric chemistry is that the methane should remain for hundreds of years. But that doesn’t match the quickly disappearing methane that various instruments keep finding and then losing.

“The methane mystery continues,” said Ashwin Vasavada, a member of the Curiosity team at NASA’s Jet Propulsion Laboratory, in a statement. “We’re more motivated than ever to keep measuring and put our brains together to figure out how methane behaves in the Martian atmosphere.”

[Editor's Note: This story was updated on June 25 to include new developments.]