One of the big questions for people who believe in extra dimensions is: Why don't we see them? Sure, we have methods for hiding them, usually by making them really tiny, but then we need to ask: Why are they tiny? Matt Johnson, Lisa Randall and I just came out with a paper that takes a partial stab at this question: Dynamical Compactification from de Sitter Space. (And a similar-sounding paper came out the same day from Jose Blanco-Pillado, Delia Schwartz-Perlov, and Alex Vilenkin.) It's an intriguing idea, if I do say so myself: starting with nothing more complicated than a higher-dimensional spacetime with a positive vacuum energy and an electromagnetic field (or a higher-dimensional generalization thereof), you will automatically get quantum fluctuations into lower-dimensional spacetimes! If we really believe in extra dimensions, we need to understand how regions with different effective dimensionalities are cosmologically related, and this is a step in that direction. 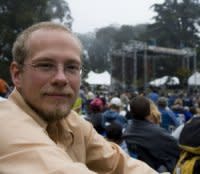