Make a Difference by Counting Croaks 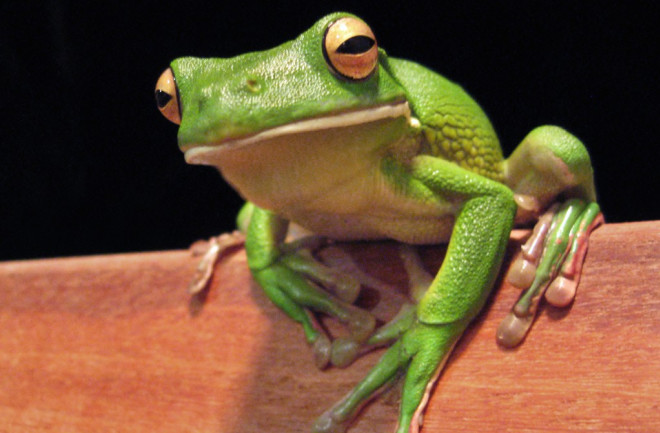 This is an except of a story that ran in the February 2015 issue of Association of Zoos and Aquariums monthly magazine, Connect.

Looking for amphibious citizen science projects? Look no further! SciStarter has some lined up for you right here.

By Cathie Gandel At dusk, Carolyn Rinaldi and her 14-year-old daughter sit silently on the shores of the lake at Wadsworth Falls State Park in Middletown, Conn. Then their ears go into overdrive. For three minutes they count the different grunts, gribbets, croaks and peeps emanating from frogs and toads resident in the wetlands. They are just two of the volunteers that took part in FrogWatch USA during 2014, a citizen science program of the Association of Zoos and Aquariums (AZA). The name is somewhat of a misnomer. The program could be called FrogListen. Volunteers identify frogs by listening to their mating calls and indicating whether each was heard individually, in a group or in a full chorus. AZA took over management of the program in 2009 and began to establish a network of chapters throughout the country. Chapter coordinators bring creativity to the program, as well as train volunteers in the necessary monitoring protocols. “The volunteers feel connected to a local group and engaged with a community,” said Rachel Gauza, education outreach coordinator at AZA. Why Frogs and Toads are Important According to the IUCN, more than one-third of the world's 6,000 amphibian species are threatened with extinction. Their permeable skins make them sensitive to environmental changes, including habitat destruction, climate change and water pollution caused by fertilizer runoff and pesticides. “It's the canary in the coal mine kind of thing,” said James Sirch, education coordinator at the Yale Peabody Museum of Natural History and leader of the chapter co-hosted by the museum and Connecticut’s Beardsley Zoo in Bridgeport, Conn. As the environment changes, the frogs will let us know, he said. Training “This is one program that is easily learned with a little bit of help and time,” said Sirch. But it does take practice. Some chapters develop their own training tools for recognizing the different calls of species. For example, Matt Neff, in the Department of Herpetology at the Smithsonian National Zoological Park in Washington, DC, and lead coordinator of the Smithsonian National Zoo chapter, has designed a website that allows volunteers to practice their skills. The chapter at Hiram College in Hiram, Ohio is working on a CD of calls recorded at different sites. “The training usually involves listening to one call at a time,” said Dr. Jennifer Clark, assistant professor of biology at the college. “But in the field, you hear overlapping calls. The CD will be more realistic.” Monitoring While training materials may differ, monitoring protocols are the same. Volunteers must be at their site at least 30 minutes after sundown, sit quietly for two minutes and listen for three minutes. Then they note the species name and calling intensity. “If you hear just a few separate individuals without overlap, that is a one, calls overlapping is a two and a full chorus is a three, said James Sirch. “If you don’t hear any frogs, you write down zero,” he says. “Hearing nothing tells you something, too.” Volunteers can choose wetland sites near their homes and are encouraged to monitor twice a week from February through August because different species of frogs breed at different times. Volunteers enter their data into FrogWatch-FieldScope, which makes information instantly available to anyone who wants to see a species’ range or discover what other species are being heard in their community and throughout the country. “We’ve found that FrogWatch-FieldScope has helped with the retention of volunteers,” said Matt Neff. “Volunteers can see the impact of their data in real time.” Barbara Foster, lead coordinator of the FrogWatch Researchers of the Greenville Zoo (FROGZ) chapter in South Carolina, appreciates the immediacy of the data. “I know when I check FrogWatch-FieldScope it is current.” Why Get Involved? “We're doing it for fun but also for the greater good of protecting a whole class of animals,” said Jenny Kinch, an education instructor at the Greenville Zoo. FrogWatch USA also gets you out of the house and into nature where you never know what you might discover. “You’ll be listening for frogs and all of a sudden, a beaver will slap its tail right behind you. It’s just fun,” said Greenville volunteer Valerie Murphy. Dolores Reed and her husband, volunteers near Washington, DC, go out together. “It's our date night,” she said. They have seen foxes and watched the courtship flights of snipes and woodcocks. And then there is what Rachel Gauza calls the “treasure hunt” aspect of the program: hearing an unexpected or rare mating call, or even observing a new species for the area. This program is more than just amphibian research, said Amanda Watson, an education instructor at the Greenville Zoo. “The program ties into so much that the AZA is about: climate change, the health of the habitat and conservation,” she said. Join FrogWatch USA and make a difference.

Cathie Gandel is a communications professional based in Bridgehampton, N.Y. She has spent over 25 years in journalism, corporate communications, and public relations – some of that time with major corporations such as Time, Inc., some with smaller companies and some as an independent consultant or freelancer.For more see www.cathiegandel.com