Since at least 125 A.D., humans have been telling stories about visiting the Moon. 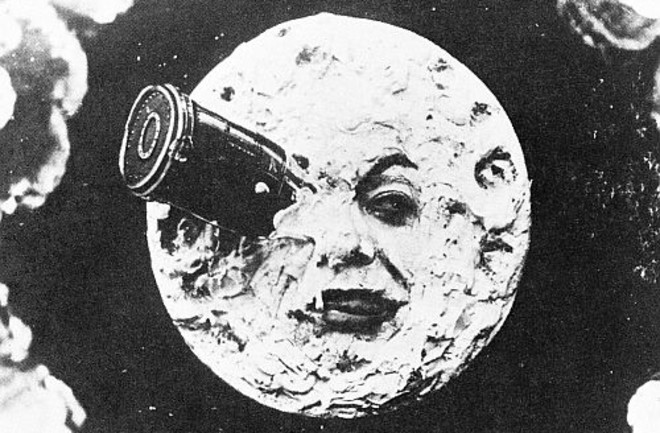 This iconic shot from the 1902 film A Trip to the Moon shows the fabled Man in the Moon embedded with a massive, bullet-like spacecraft that was launched from Earth by a giant cannon. (Credit: drmvm1/Flickr)

It’s been 50 years since humans first landed on the Moon. But for how long have we rehearsed those first steps in our imaginations? This we do know: We’ve been telling each other tales about our Moon-landing dreams for nearly 2,000 years.

The earliest known written story about people traveling to the Moon was by Lucian of Samosata, a Syrian-Greek writer born around 125 AD. His travels throughout the Mediterranean world were the basis for the fictional tales in his True Stories, an often bawdy satire of Homer’s revered epic the Odyssey.

One such story tells of the journey Lucian and 50 companions take on a boat carried to the Moon by a giant waterspout. When they arrive on the lunar surface, they’re greeted by a race of three-headed vultures and soon find themselves in the middle of a war with another species. Eventually they make their way back to Earth and experience more fantastic adventures. Lucian’s lunar tale is the earliest known piece of fiction that depicts space travel, a Moon landing, aliens, and interplanetary war.

Nearly 2,000 years ago, Lucian of Samosata wrote a tale about a boat that was blasted all the way to the Moon by a powerful waterspout. (Credit: Ruth Cobb, 1926, Chatterbox Children’s Annual)

Some 15 centuries later, three people changed our view of our place in the universe forever. Nicolas Copernicus published his heliocentric theory of the universe, which replaced the Earth with the Sun at the center of the solar system; Galileo Galilei spotted sunspots, the phases of Venus, and moons circling Jupiter; and Johannes Kepler showed us that the planets circle the Sun in ellipses.

But Kepler also wrote a novel about landing on the Moon. Entitled Somnium (A Dream), he began writing it when he was still a teenager. Although it took him about two decades to complete, he eventually finished it in 1608. However, it wasn’t published until 1634 — four years after his death.

The story is framed as Kepler’s dream. The main character, the young son of an Icelandic woman who might be a witch, is fascinated by astronomy and serves as a stand-in for Kepler himself. Much of the book is a riveting (and in some ways accurate) account of the boy’s journey through space to the Moon, including whom he encounters and what he observes.

In the tale, there exists an omnipresent aether that fills the void between Earth and the Moon. It’s very cold, so humans must rely on summoned demons to keep them warm. The human travelers must also plug their noses with damp sponges to help them breathe. The trip is so stressful that they must be put in suspended animation. Kepler’s descriptions of how the Earth would look from the Moon are surprisingly accurate, even by today’s standards. Overall, the science in Somnium is remarkable for its time.

The title page from a reproduction of Kepler’s Somnium (A Dream). (Credit: Wikimedia Commons)

Most subsequent stories about lunar journeys were satires, like George Tucker’s 1827 work: A Voyage to the Moon. But writers also began treating tales of lunar voyages a bit more seriously. Edgar Allan Poe’s 1835 story, “The Unparalleled Adventure of One Hans Pfaall,” was a mix of satire and serious speculative fiction. The imaginative breakthrough came three decades later from the pen of French writer Jules Verne: From the Earth to the Moon (1865), followed by Around the Moon (1870).

In Verne’s work, members of the post-Civil War Baltimore Gun Club use an arguably scientific method — a giant cannon — to shoot their travelers around the Moon. But they don’t land. Instead, they experience a series of misadventures while in orbit around the Moon before eventually making their way back to Earth.

On the other hand, the two protagonists of H.G. Wells’ 1901 novel The First Men in the Moon use a “hand-waving science” method of travel. But they actually land on the Moon, explore it, and return. In the story, an eccentric physicist named Cavor plans to land on the Moon in a ship of his own design powered by a metal he invented with antigravity properties called “cavorite.” After enlisting the reluctant help of an English businessman named Bedford, they build a steel sphere with glass windows and sliding cavorite shutters. Sliding these open and closed allows them to “steer” the ship to the Moon.

Off they go, weightlessness on the way. They land safely on the Moon (which has a breathable atmosphere) and explore its surface. They then drunkenly enter the Moon’s underground caverns, where they are promptly captured by insectoid extraterrestrials called Selenites. After more harrowing experiences, the two men escape and make their way back to the lunar surface. They split up, looking for their ship, but Cavor is injured. Bedford reluctantly leaves the Moon, alone. Later, home and safe, Bedford learns that scientists are receiving radio transmissions from Cavor, who is still alive and still trapped in the Moon.

For nearly two millennia, storytellers have devised some ingenious methods to get their characters to the Moon. Here are just a few highlights:

*This is the first mention of a multi-stage rocket in literature. **A metal that is only partially antigravitational: it is repelled by the Earth but attracted by the Moon.

Films had been around in one form or another since the 1880s, but public screenings where people paid admission fees first started in 1895. In 1902, French filmmaker Georges Méliès made his landmark 21-minute film Le Voyage dans la Lune (A Trip to the Moon). In it, the spaceship is a bullet-like projectile a la Verne, but the plot is based on the Wells novel. Le Voyage dans la Lune is often regarded as the first science-fiction film.

By the 1920s, the art of filmmaking had advanced far beyond Méliès. In 1929, Austrian director Fritz Lang released his follow-up to his futuristic flick Metropolis (1927). Entitled Woman in the Moon, it’s about six people (five men and a women) who travel to the Moon in search of gold. The plotline and acting resemble a TV soap opera, and the Moon has normal gravity and a breathable atmosphere on its far side. But the special effects are remarkable. Especially impressive are the rocket launch and the scenes as the ship slips around behind the Moon.

From the 1930’s through the end of World War II, sci-fi stories with lunar themes were mostly about exploration, aliens, and the Moon’s desolate environment, not about first landings. That began to change at the end of the war. One story that stands out is the 1950 Robert A. Heinlein novella “The Man Who Sold the Moon.”

A magazine advertisement for the 1950 movie Destination Moon. (Credit: Rossano/Flickr)

Heinlein’s tale is about a wealthy American businessman named D.D. Harriman who is obsessed with being the first man to set foot on the Moon. At a time when neither the technology nor public interest exists for a Moon landing, Harriman has the money, the PR savvy, and the con-man sensibilities to make it happen. And he does. The science is well-crafted, the characters are believable, and the ending? Ah, the ending. Harriman’s billionaire buddy backers won’t let him in the spaceship to become the first man to set foot on the Moon; he’s too valuable as the front-man selling the dream of spaceflight-for-all back on Earth.

Heinlein also played a role in another first Moon landing story. Except this one was a movie — and also a classic. Produced by George Pal and Irving Pichel, Destination Moon was released in 1950. Heinlein was approached to help write the script. He drew in part on the plot of his juvenile novel Rocket Ship Galileo, but he also clearly incorporated plot lines from “The Man Who Sold the Moon.”

The movie itself is a well-plotted, reasonably well-acted story of corporations rather than governments providing the money and know-how to put a man on the Moon. There’s drama a-plenty, with dangerous situations solved by smart use of science and engineering. The movie accurately depicts weightlessness, the landing itself, and the lunar environment. The “cold equations” climax — where one of the crew must be left behind in order for the rest to make it home — is solved as only engineers could.

Many more imagined Moon landings appeared in both print and film before those first “small steps” in July 1969 turned imagination into reality. And they remain as reminders of how wide and deep we dream, and of how fierce our desire is to explore what waits out there beyond Earth’s thin atmosphere.