Lunar puzzler: What is the mysterious feature in this beautiful image of the Lunar Module orbiting the Moon? 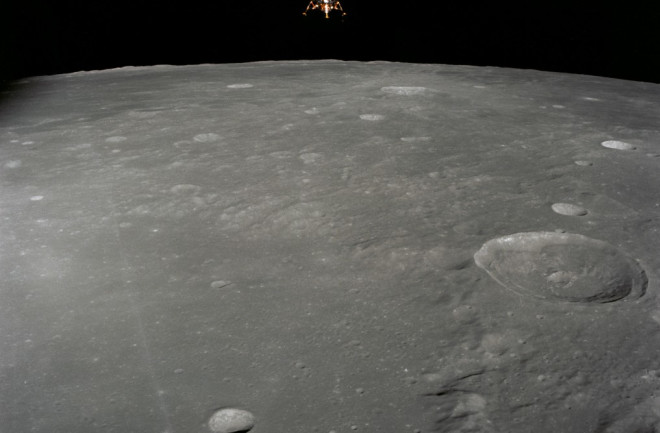 | UPDATE: The lunar puzzler is solved! For the answer, read through to the end of this post. -- T.Y. |

Last Thursday marked the anniversary of a significant event in human history: the Apollo 12 Moon landing on Nov. 19, 1969. This was just the second time humans ever stepped foot on our cratered satellite. But the occasion passed us by last week largely unheralded. That's understandable, because the landing wasn't a first — the astronauts of Apollo 11 hold that honor. And a 46th anniversary isn't as resonant as, say, a 50th would have been. "Once is happenstance. Twice is coincidence," said Auric Goldfinger in Ian Fleming's James Bond novel. (*See the end for the rest of the quote.) But Apollo 12 showed just the opposite: Landing on the Moon a second time wasn't just coincidence. It showed that humans were capable of more than just one giant leap. We could leap a second time across across more than 220,000 miles of space and then land with breathtaking precision — within walking distance of the mission's target, the robotic Surveyor III spacecraft that had touched down back in 1967. So I think it is fair to say that with Apollo 12, humans became true spacefarers. To mark the anniversary of the landing, NASA published the image above. It shows the Lunar Module "Intrepid" in orbit as the two astronauts aboard, Charles "Pete" Conrad Jr., Apollo 12 commander, and Alan L. Bean, pilot, were preparing to descend to the Moon's surface. Astronaut Richard R. Gordon Jr., pilot of the Command/Service Module "Yankee Clipper," shot the photograph. He remained with the Clipper in lunar orbit while Conrad and Bean descended in the Intrepid to explore the surface of the moon. The image is breathtakingly beautiful. But it also shows a very curious feature on the surface of the Moon: that long, ruler-straight, light-colored line arrowing into the distance on the left. Just what is that? I posed this question to my friend and colleague, Jeffrey Kluger, Editor-at-Large at Time, and co-author with astronaut Jim Lovell of "Lost Moon: The Perilous Voyage of Apollo 13," the book that formed the basis for the movie "Apollo 13." Kluger proposed a few possibilities — including this:

It could, of course, simply be dolly tracks from the film crews that faked the moon landings. How they ever had time to do that, invent autism-inducing vaccines and come up with the climate change hoax, I'll never know.

All joking aside, I thought I'd give readers of ImaGeo a chance to weigh in on what that intriguing feature might be. Please give it a go in the comments section. In the meantime, I'll try to get a definitive scientific answer. I don't have any prizes to give to the first person to come up with the correct explanation — other than putting your name in lights. (That is to say, updating this post with your name along with the answer.) Now, have a look at some of the other spectacular images captured by the astronauts aboard Apollo 12:

Earth, as seen from the Apollo 12 command module in November of 1969. (Source: NASA) After launch of the Apollo 12 mission on November 14, 1969, the astronauts looked back toward Earth. One of them shot this awe-inspiring image of the home planet as the spacecraft headed for the Moon.

Alan Bean heading for the lunar surface on Nov. 19, 1969. (Source: NASA) Charles "Pete Conrad, Jr. shot this photo of Alan Bean as he made his way down the ladder of the Lunar Module, or LM, preparing to step foot on the Moon.

Astronaut Alan L. Bean, Lunar Module pilot for the Apollo 12 Moon landing mission, holds a container filled with lunar soil. Astronaut Charles "Pete" Conrad Jr. is reflected in the helmet visor. (Source: NASA) The lunar soil sample that Alan L. Bean collected in the container he is holding was returned to Earth for analysis. As with samples from other missions, it contained a surprise: amino acids, which are, of course, the building blocks of life. A team of NASA-funded scientists recently solved the enduring mystery of where those compounds came from. The results were announced

in late October of this year. No, alien worms or some such aren't wriggling and defecating in the lunar soil. Instead, the organic matter appears to have come mostly from contamination of the samples back on Earth — with a possible extraterrestrial contribution from meteorites. (That latter source was indicated by amino acids that are extremely rare in terrestrial biology but common in meteorites.)

Pete Conrad stands by the Surveyor III spacecraft during the second extravehicular activity (EVA-2) of the Apollo 12 mission. (Source: NASA) Pete Conrad Jr. examines the unmanned Surveyor III spacecraft, which had soft-landed on the Moon back on April 20, 1967. The accordion-like device in front of him is a sampler designed to dig, scrape, and trench the lunar surface, and to hold material while a camera on the robotic spacecraft photographed it. Alan Bean shot this photo during the astronauts' second walk on the Moon. The Lunar Module "Intrepid" can be seen in the right background — just 538 feet away. Conrad and Bean found Surveyor to be discolored. At first they thought exposure to sunlight was the cause. But something else was to blame. "We thought this thing had changed color, but I think it's just dust," Bean said. "We rubbed into [Surveyor's] battery, and it's good and shiny again." The dust had been kicked up by Intrepid's descent engine during landing. Some of it settled out over Surveyor, giving the spacecraft a tan hue. During their visit to Surveyor, Conrad and Bean removed the spacecraft's television camera and other parts for examination back on Earth to learn how exposure to the harsh environment of the Moon might affect materials. After three hours and 49 minutes on the surface, the astronauts hiked back to Intrepid. Once back inside, they jettisoned their spacesuits to the surface and prepared for liftoff. After 31 hours and 36 minutes on the Moon, the astronauts fired Intrepid's ascent rocket for about seven minutes, putting the LM into lunar orbit. Here they rendezvoused and docked with the Yankee Clipper. During the 89th hour of the mission, the Clipper's main engine was fired, and the astronauts headed for home. They splashed down about 400 miles southeast of American Samoa, just three miles from the target. The mission had lasted 244 hours, 36 minutes, 25 seconds. A mere 62 seconds longer than planned. * Here's the full quote from Auric Goldfinger: "Once is happenstance. Twice is coincidence. Three times, it's enemy action."| 11/30/15: To figure out the origins of that mysterious white line visible in the Apollo 12 photograph at the top of this post, I checked with NASA headquarters right before Thanksgiving. Their answer shows that some of the commenters below were right. Here's the raw, unprocessed image, printed directly from the negative, that NASA sent me:

The Lunar Model in orbit around the Moon, as photographed from the Command Module on Nov. 19, 1969. (Source: NASA) Notice that there is no long, white streak on the surface, as there is in the other version of the image at the top of this post — which is a digitally processed version. This shows the line is not real. It was probably added inadvertently when the negative was copied, or during post-processing of the digital version of the image, according to Allard Beutel, Director for News and Multimedia in NASA's Office of Communication. I was hoping for something sexier. Maybe dolly tracks. ;-) — T.Y. |