Last year, when creationist/exorcist Governor of Louisiana Bobby Jindal signed the creationist-enabling academic freedom bill into law, I said "Keep fighting, people. Because I guarantee this victory for the bad guys in Louisiana will embolden them." Man, I hate being right all the time. This past week, Louisiana's Board of Elementary and Secondary Education adopted a policy that allows teachers to use outside materials to teach scientific theories deemed controversial. What theories do you think those would be? Gravity? Boyle's law? Quantum mechanics? Yeah, right. This is an incredibly thinly veiled policy to let creationists use their own materials in the class, materials that would otherwise not be allowed due to that pesky First Amendment. Creationists changed their tune to talk about Intelligent Design when they got caught violating the Constitution, and they got caught again at the Dover trial when an ID book was found to be a creationist book with a handful of word changes. So they changed tactics again, now claiming that teachers need "academic freedom" to discuss controversial theories. The thing is, evolution isn't controversial. Not among real scientists, that is. It's a manufactured controversy, with reality on one side, and antiscience creationists making stuff up on the other. The ultimate irony of all this is that the last thing the creationists want is academic freedom. What they really want is for children to learn only their errant beliefs, and get no real science education. I've said it before, and I'll no doubt have to say it again and again: if you live in Louisiana -- and really, just about every state is vulnerable to this -- make your voice heard. The creationists rely heavily on people simply not knowing what they are up to. The first step is to get aware, and the second is to do something. Go do something. Write letters, make phone calls. Vote when the chance comes. Because Louisiana has already taken steps over the cliff, and the only lifeline is an educated populace... something the creationists fight to prevent. 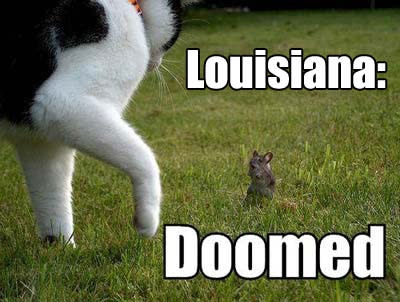