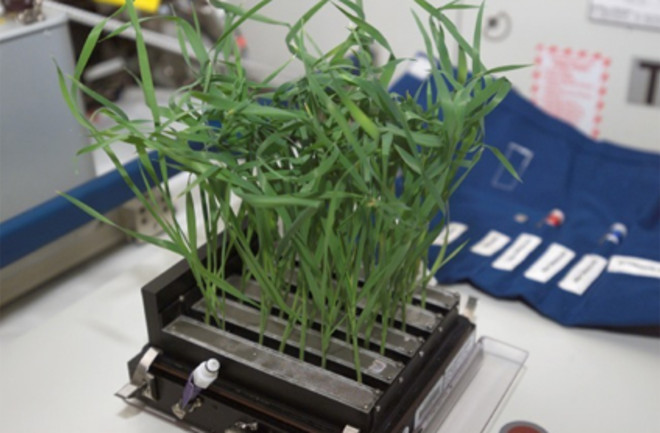 Jonathan Lethem might prefer to think that his short story Lostronaut, in the most recent New Yorker, was a reflection on absence, love, memory, and death, but you, know the heck with artsy authors and their high-falutin' themes (though his Fortress of Solitude is a bit of a nod to comics nerds). This story focuses on one member an international crew of astronauts trapped on their low-earth-orbit space station. The Chinese have launched a series of space-mines that prevent the crew from using their re-entry pods to get back to earth, so all they can do is send messages home as their space station slowly runs out of energy. We're told almost immediately that the station's air supply is provided by plants kept in a special greenhouse, but that the facility was damaged in an accident. As the plants die, the ratio of carbon dioxide to oxygen gets steadily but slowly worse, leaving the station inhabitants with plenty of time to ponder life and death. The use of plants to recycle air and provide food for long term space trips is one of science fiction's favorite tropes. It makes so much sense, right? Green plants and algae use carbon dioxide and convert it into oxygen, which humans and other assorted mammals breath in and convert back to carbon dioxide. The planet Earth itself functions, more or less, under exactly this sort of closed system. In the 1990s, NASA's Advanced Life Support division conducted a series of experiments at the Johnson Space Center to see if they could make the system work on a much smaller scale. Working with the Utah State University, they developed USU-Apogee, a kind of dwarf wheat that grows to its full height of 18 inches in just 23 days under spaceship-type conditions (primarily 24 hours of artificial light). The wheat's small, double leaves are also thought to be more efficient for processing carbon dioxide than plants with larger leaves. In the 1995, NASA locked a scientist in a 7.2 meter chamber for 15 days with a crop of dwarf wheat. The scientist, Nigel Packham, exercised on a treadmill every day and conducted experiments the rest of the time. By the end of the 15 days, Packham emerged healthy, and the results indicated the wheat had produced more than enough oxygen for one man. Even better, the scientists found the plants actually increased their respiration rate when Packham was active and producing more CO2, and then slowed down when he became less active. In subsequent experiments they used chemical and mechanical means to recycle air and water for a four-volunteer crews for 30 and then 60 days. And in a fourth test, conducted in 1997, NASA installed five volunteers in a three-story chamber for 90 days and had them use a combination of plant, mechanical, and chemical processes to recycle their air and water, and to provide some of their food. The experiment was deemed a success, and a yet larger experiment was planned for 2001, but it appears to have never been conducted. But NASA has not abandoned the project. In 2002, Gary Stutte spend 73 days on the International Space Station so he could conduct Photosynthesis Experiment Systems Testing and Operations (PESTO, née Photosynthesis and Assimilation System Testing and Analysis (PASTA)). He grew some USU-Apogee dwarf wheat in three cycles of 23 days so he could try to determine the effects of microgravity on the plant. The result? Stutte found that the plants grew and respired at about the same rates in microgravity as they did on earth. Looks like Lethem's— and the rest of SciFi's— premise of using plants to provide the oxygen on for our great colonizing spaceships is on pretty solid footing. Image courtesy of NASA