[Update 2: According to Bob Jacobs, NASA Deputy Assistant Administrator for Public Affairs, the Sunday Express article I link to below "is a fiction". Sounds to me like I got duped, and I apologize to everyone for forwarding this story. Hopefully more info will come out soon, and I'll update as I hear it.]

[Update: folks at CollectSpace are saying this article is a hoax. I have no evidence either way, which is why I wrote this post using the "allegedly" format. Hopefully more evidence one way or another will come out soon.]

On July 20, just weeks from now, it will be the 40th anniversary of the moment a human stepped foot on another world. You've seen the footage: Neil Armstrong in his bulky suit, stepping off the lunar module's footpad. Ironically, though, for such a momentous occasion, the video looks awful. Noisy, low-res, and washed out. Well, it turns out that's because this iconic scene, shown millions of times in the ensuing years, is not the original footage. It was actually taken using a 16mm camera aimed at a screen at NASA's Mission Control room. And the screen was only showing highly compressed data, so the end result is the lousy stuff we've grown used to.

But all that may now change. The UK Sunday Express is reporting that the original tapes have been found! This means that we may finally, after four decades, get the high-quality footage of Neil Armstrong's small step that we've always wanted. The deal is this: the video stream from the Moon was of a decent quality, but far too large too be able to be be sent to TVs around the country and the world. Using the Parkes radio telescope in Australia, astronomers recorded the video beamed from the lunar surface in high quality, but what they transmitted to NASA was necessarily compressed. It's the latter we've all seen. The thing is, the high quality tapes were then lost somehow. NASA admitted it a few years ago, and the search was on! According to the article the tapes were finally found recently in a storage facility on Perth. This is very exciting, and I certainly hope it's true. I'd love to see this moment once again, but this time with a beautiful clear picture! And of course, me being who I am, I have to add this part: 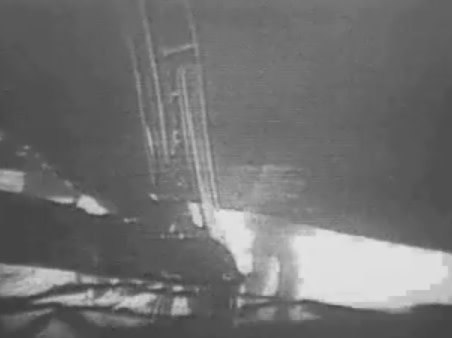 ZOMG! I can see right through NASA's lies! And through Neil Armstrong, too.

Crucially, [the tapes] could once and for all dispel 40 years of wild conspiracy theories.

That is so wonderfully naive! First, conspiracy theories about the Moon landings aren't based on facts. If they were, the hoax idea would have dried up and blown away 30 years ago. They have no facts. All they have is a zealous fervor and a gross misunderstanding of reality. Finding the tapes won't help; you could fly a conspiracy theorist to the Moon and show them the equipment lying on the desolate surface, and they'd accuse you of drugging them. My advice: if you try this, leave that goofball on the Moon. That'll give him plenty of time to think over his ideas. Second, the use of the word "crucial" made me laugh. I've talked with dozens of people at NASA about the Hoax theory, and it's hardly something that's critical to them. They all regard it as an irritant, like a tiny pebble in your shoe or a pesky fold in your underwear you can only feel when you sit a certain way. Ignorable, but irksome when you're reminded about it. And though they'd never admit it, I bet every single person at NASA loves how Buzz handled it. And third, what the article author forgets is that, to a conspiracy nut, everything in the whole Universe is part of the conspiracy. So the fact that the tapes were missing is evidence of a coverup, and NASA finding the tapes is due to the massive pressure of the hoax community, and if the tapes aren't exactly as promised that's because NASA has doctored them, and if they are pristine and perfect then you can look just there and see the wires holding up the astroNOTS, and you still can't see stars in the footage, and and and. So, a few weeks before the 40th anniversary of this incredible moment in history, here's what I think about the Moon Hoaxers: screw them. Let them gripe and moan and try to pee in the punch bowl of NASA. In reality, that punch bowl is way, way over their heads. I can see the magnificent achievement of Apollo for what it was, and I think the vast majority of people out there do as well.