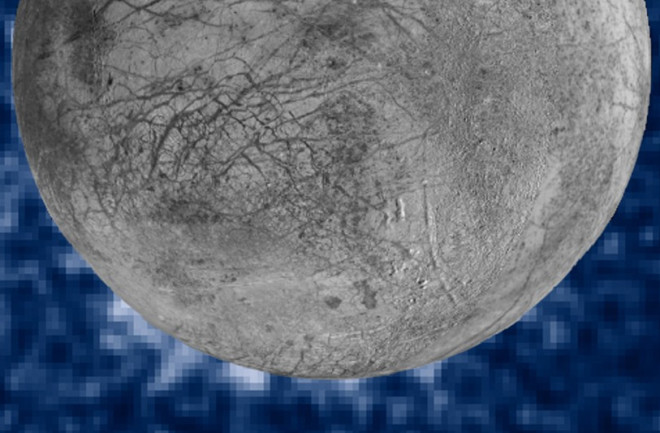 Potential plumes of water vapor were detected erupting from Jupiter's moon Europa by the Hubble Space Telescope earlier this year. (Image: NASA/ESA/W. Sparks (STScI)/USGS Astrogeology Science Center) The search for life beyond Earth has inspired many strategies, from examining microfossils with elemental analyzers, to sequencing putative genetic material, or studying the composition of distant exoplanets. But a recent paper from Jay Nadeau, a Scientific Researcher at the California Institute of Technology, proposes a surprisingly new approach of looking for life by, well, looking for it. Nadeau and her colleagues suggest that “rapid and meaningful” cell movement is “an unambiguous biosignature that makes no assumptions about the chemical composition of the organisms under study.” They propose using a microscope to track particles moving through a field of view, but the two qualifiers are critical: after all, dust grains that move by diffusion, or are pushed by wind or water currents, can easily be mistaken for cells. “Rapid” movement can be explored using the Stokes-Einstein equation to determine how fast a non-living sphere might move through water. A sphere one millionth of a meter (a micron) in diameter moves about 0.01 microns per second; microbes of the same size can swim at 10 to 100 microns per second. “Meaningful” movement distinguishes a putative cell from its medium: under controlled conditions, abiotic diffusing particles tend to move in a straight line, while microbes tumble around in wandering paths, occasionally with a chemical target in mind. To make use of these seemingly diagnostic traits, Nadeau proposes isolating fluids in a small chamber – perhaps one mililiter – and using microscopic imaging to see what happens. To sweeten the deal for any camera-shy microbes, temptations like nutrients, oxygen, or light can be used as bait at one end of the chamber to see if directional movement can be instigated. In the Earth’s oceans, up to 80% of microbes are believed to exhibit movement, so Nadeau is prioritizing the “Ocean Worlds” of our Solar System – places like Europa, Enceladus, Titan, and Ganymede. A microscope-toting spacecraft could fly through an ice plume to collect material, land on the ice and take a look at fluid-filled ice grain junctions, or swim through the oceans to directly sample the liquid phase. As simple as a Europa-bound microscopic imager is in concept, there are plenty of challenges. On the technical front, micron-resolution microscopes require several lenses that could easily be thrown out of alignment by the intense vibrations of launch or landing. Automatically focusing on the correct plane in a fluid sample could be difficult. And as anyone who’s tried to email a video knows, data volume would be an impediment, necessitating on-board image processing and screening prior to transmission toward Earth. The method also limits its astrobiological range by only encompassing live, moving cells. Nadeau argues convincingly that self-directed motion is chemistry-agnostic, but this operating principle could be throwing out the baby with the bathwater. After all, most organic material is made up of dead cell remnants; if the first order question is whether a celestial body ever contained life, looking for vast repositories of organic material could be a more wide-reaching approach. After all, a motion-based imager in a terrestrial context would overlook a fallen tree, an oil reservoir, or a whale carcass. Nonetheless, the proposed instrument is impressive for its simplicity in a “why didn’t I think of that?” kind of way, and it could be a useful addition to an Ocean Worlds mission. Looking for life by zooming in on one of biology’s most obvious traits is a compelling place to start.