Looking Back at the 1982 eruption of El Chichón in Mexico 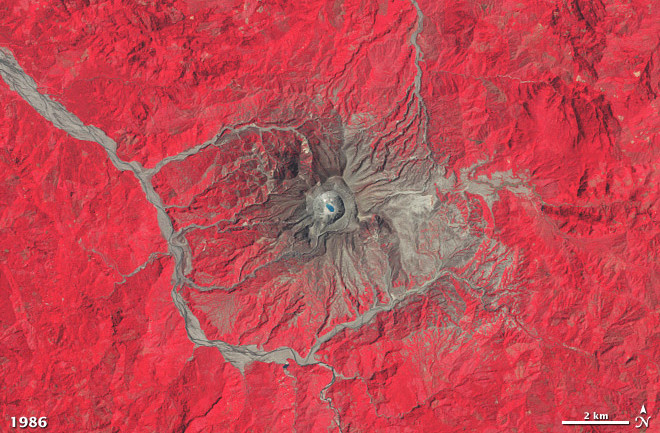 Today marks the 30th anniversary of one of the most important volcanic events of the 20th century -- the eruption of El Chichón in Mexico. In a little under a week, the seemingly dormant volcano in Chiapas produced three Plinian eruptions that killed at least 1,900 people living near the volcano and also released a remarkable amount of sulfur dioxide and particulates into the atmosphere relative to the size of the eruption. The total volume of the eruption was much smaller than Pinatubo in 1991, but its effect on global climate was as significant as its bigger cousin. The eruption of El Chichón is is overlooked in comparison to other historic eruptions like Mount St. Helens in 1980 or the aforementioned Pinatubo eruption, yet it teaches us a number of important lessons about how we can be better prepared for volcanic disasters and the potential influence of volcanoes on the Earth's climate.

El Chichón was by no means a remarkable-looking volcano prior to 1982 (see right) -- it is merely a complex of domes with a tuff ring made of ejected volcanic material. It sits between two volcanic arcs -- the Trans Mexican Volcanic Belt and the Guatemalan Belt -- and in a region with few active volcanoes. Prior to the 1982 eruption, the volcano had not erupted since ca. 1360 A.D. (although a small explosion may have occurred in ca. 1850). The eruption in 1350 was a major event, a VEI 5 eruption that produced about 2.3 cubic kilometers of tephra -- and was one of a string of at least 11 VEI 4-5 eruptions from the El Chichón complex over the past 10,000 years. This area has seen human habitation for thousands of years, so it isn't surprising that eruptions of El Chichón may have played a role in how civilization rose and fell in the region. (In fact, pottery shards are found in deposits from the volcano as far back as 2,500 years before present.) So, although the volcano erupted infrequently, when it did, it did it with gusto (a typical pattern for volcanoes with longer repose times). Thanks to the over 600 years since the last major eruption of El Chichón, few people living near the volcano (or even in the geologic community) appreciated the danger that it posed. Some even considered El Chichón to be dormant or extinct. However, small earthquakes were felt around the area in 1980 into 1981, but little was done to increase monitoring around the supposedly quiet volcano. It wasn't until the first major explosive eruption occurred on Mar. 28, 1982 that it was fully realized that El Chichón was far from dormant. The rapid escalation of activity at El Chichón is very similar to what happened at Chaitén in Chile during its 2008 eruption -- the time between the first signs of an impending major eruption from a volcano thought to be "dormant" and the explosion itself was very short. Earthquakes had been increasing over February and March 1982, enough to cause some people living near the volcano to leave, but little was done to increase monitoring or awareness of the volcano, even after geologists who had mapped the volcano in 1980-1981 had warned that it was hazardous. On Mar. 28, 1982, this all changed. At around 11:30 p.m., the volcano produced the first of its three major Plinian eruptions, unleashing a plume that reached 27 km and within 40 minutes, the plume had a diameter of 100 km. This first eruption only last two to three hours, but in that time, about 0.3 cubic kilometers (dense rock equivalent) were erupted at a rate four times the intensity of the 1980 eruption of Mount St. Helens. Ash and tephra fall from the eruption was 15 cm thick 20 km NE from El Chichón and 5 cm thick as far as 70 km NE. Fires had been started near the volcano due to all the hot volcanic material falling on the flanks of the volcano. After the initial blast on Mar. 28, things quieted down at El Chichón until Apr. 4, with only smaller vulcanian and phreatic (steam-driven) explosions from the volcano -- and all this time people chaotically evacuated the area. (However, with the lower activity, some did return, with dire consequences.)

However, on Apr. 4, the volcano opened up yet again, this time producing an even bigger eruption than on Mar. 28. The eruption began with a pyroclastic flow that ran out over 8 km from the volcano. The deposits produced by this pyroclastic flow were 100 meters wide and 3 meters thick at its far end. The flow is estimated to have been moving at 100 m/s and, most famously, destroyed the village of Francisco Léon (see above), killing as many as 1,000 people. The pyroclastic flow was followed by two plinian eruptions that produced plumes that reached at least 29 km (see below). In total, nine villages were destroyedover the course of the eruption.

Apr. 4 was the last major explosive event at El Chichón. The total eruption released about 1.1 cubic kilometers of material (dense rock equivalent), or roughly the same as St. Helens in 1980 and a new crater that was a kilometer across and 300 meters deep was formed (an acidic lake has since formed in the crater; see below). Near the volcano, the landscape was covered by 25 to 40 cm of airfall and villages 7 km from the volcano has roofs destroyed by 50- to 60-cm diameter bombs. Over 24,000 square kilometers of countryside were covered with ash as a majority of the material erupted came in the form of airfall. At the time, Mexican officials estimated that over $55 million (equivalent to about $132 million in today's dollars) of damage was done to the coffee, cocoa and banana crops and cattle ranchers had to move their herds as pastureland was covered in ash as well. After the eruption, a dam on the Río Magdalena made of volcanic debris breached, flooding the valleys with hot water (as hot as 82°C) that destroyed bridges and a hydroelectric station. The eruption of El Chichón is still the largest volcanic disaster in modern Mexican history.

However, the effects of this eruption were not limited to Mexico. El Chichón released a remarkable amount of sulfur dioxide into the atmosphere - almost 7 to 10 million tons, or roughly seven times that of the equivalently sized St. Helens eruption. The andesite magma from El Chichón has about 2.6 weight percent SO3, many times more than most magmas. One clue to where this sulfur came from was the odd occurrence of anhydrite (a calcium sulfate) and halite in particles collected from the stratosphere from the eruption -- this suggests that the magma was contaminated by an evaporite deposit, which are usually high in sulfur due to the presence of minerals like anhydrite and gypsum. However, recent research suggests this might not be possible based on the isotopic composition of the sulfur. The ash plumes from El Chichón added a large load of sulfur dioxide (see below) and particulates to the atmosphere that circled the globe in a few weeks. This material helped warm the stratosphere by 4°C and cool the north hemisphere by 0.4-0.6°C -- one of the most significant cases of cooling in the past few centuries. It also lowered atmospheric transmission of sunlight to the surface significantly. The haze from the eruption reduced visibility to a few kilometers as far as 700 km from the volcano and produced vibrant sunsets around the world.

The eruption of El Chichón teaches us two very important lessons about monitoring volcanoes. First, even volcanoes that seem benign can be very dangerous. Over 75 percent of the major eruptions for the past few millenia have come from volcanoes with no known historical eruption. This means that is it vital to map all volcanoes in volcanically active regions to better understand their patterns of behavior. It also means that monitoring should not be limited to those volcanoes that are historically very active, but also to volcanoes that could pose a danger if active resumed. Second, El Chichón shows us that it might not take a large eruption to have a significant impact on global climate. I've talked about the "missing eruption of 1258 A.D.", which most people assume needs to be a volumetrically large eruption, however as El Chichón shows, even an eruption that only released about one-tenth of the material of the 1991 Pinatubo eruption can have as large, if not larger, climate impact. Sources

Special thanks to R. Simmon for the false-color Landsat images of El Chichón. These false-color satellite images were collected on Februrary 21, 1980 by Landsat-3, and on March 11, 1986 and June 4, 2011 by Landsat-5. NASA Earth Observatory images by Robert Simmon, using Landsat data from the USGS Global Visualization Viewer.