Look Out! New Eruption Might be Starting in Hawai'i 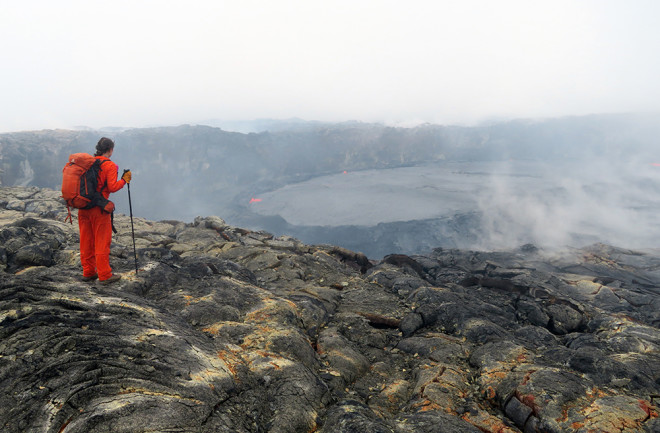 USGS geoscientist looks out over the Pu'u O'o lava lake on April 18, 2018. USGS/HVO. Kilauea! What's not to love? The Hawaiian volcano has been constantly erupting over over 37 years and has not one but two active lava lakes. Lava flows are regular features on the volcano's broad slopes and every once in a while, the summit lava lake has a small explosion when pieces of the walls fall into the fiery pit. Not only that, but you can watch it all happening! The USGS Hawaiian Volcano Observatory has webcams watching many points of interest on Kilauea -- both regular webcams and thermal webcams that can see through any steam or gas emissions that might come from the lava lakes. My favorites are pointed towards the surface of the summit Halema'uma'u lava lake along with a thermal camera pointed down onto the lava lakes surface. However, if the other lava lake at Pu'u O'o, on the east rift, are more your thing, you can watch that as well (albeit from further away). So why all this Kilauea love? Well, it looks like things are afoot! If you look at the summit lava lake, the lava level is very high, almost to the rim of the pit crater where the lava lake sits. Much higher and lava is going to spill out the top and lava flows will cover part of the larger Halema'uma'u crater flow, like it did in 2015. The whole summit area has begun to inflate again as well, which suggests that magma is rising and filling into the upper part of the volcano.

Kilauea's magma plumbing, showing the summit lava lake at Halema'uma'u and the east rift lava lake at Pu'u O'o. HVO/USGS. Kilauea's plumbing is very interconnected (see above). Magma rises up under the summit and then moves down a conduit system that feels Pu'u O'o, down on the eastern flank. So, as the summit inflates, pressure builds and that magma moves out into the rift. That's exactly what we see happening right now: Pu'u O'o is inflating and the lava lake level there has risen 7 meters (23 feet) in ~3.5 weeks! That means the pressure is getting higher and higher as magma fills in at the rift. Where will this go? Well, that's the trickier part. As the pressure builds at Pu'u O'o, we might expect a breakout of lava flows at Pu'u O'o to relieve the pressure ... or we might see an eruption somewhere between the summit and Pu'u O'o, something like a pipe bursting between the two locations. This scenario would likely cause lava fountains and lava flows like we saw in 2011 during the Kamoamoa fissure eruption. So, if you like watching volcano webcams, then this weekend might be a good time to keep a close watch on Kilauea. All signs point to something big changing at the Hawaiian volcano, but the question is when and where.