Look down, look all around during the total solar eclipse 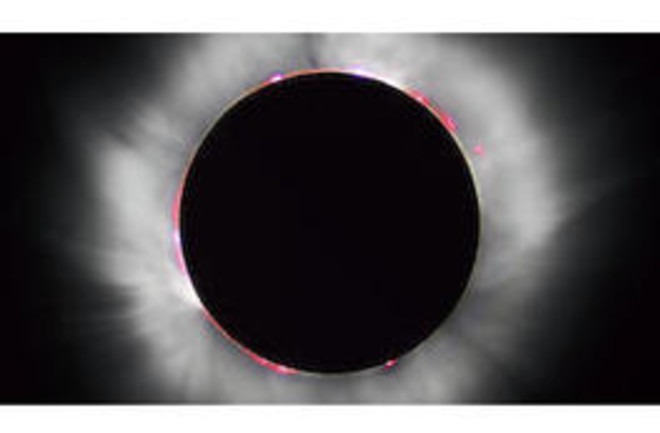 Solar eclipse. Credit: Luc Viatour (CC-BY-SA) On August 21^st, millions of people across the U.S. will have the opportunity to witness a total solar eclipse. But we won’t be the only ones taking notice—there is a good chance animals, and even some plants, will be affected by the event, too. It is not as farfetched as you might think. Many animals and plants respond to daily changes in light and temperature. Birds sing at dawn while fireflies come out at twilight. Flowers like morning glories and poppies open in the morning and close at night; others, like the bat-pollinated night-blooming cereus, open their flowers and release their fragrance well after the sun has gone down. When sunlight dims and temperatures cool during this month’s eclipse, the change might be significant enough to affect these and other organisms. Records of animals or plants reacting to past eclipses are slim. A total eclipse doesn’t happen every day, and rarer still is one that occurs over a long stretch of continuous, populated landmass, like the one coming up later this month. Taking advantage of this opportunity, scientists and educators at the California Academy of Sciences in San Francisco launched Life Responds, a citizen science project that asks individuals to record changes in plant or animal behavior during the eclipse.

Check out this simulator to see what the eclipse will look like at your location: https://eclipsemega.movie/simulator “We were looking for a way to mobilize and engage people that also matched our institution’s mission to explore and explain the natural world,” said Elise Ricard, the academy’s public program coordinator. “Other projects are documenting what is happening in the sky. We took a slightly different focus by connecting an astronomy event to what happens here on Earth.” Participants in the project will use the iNaturalist app to submit photos or written observations. What might some of these behavioral changes look like? Mario Pesendorfer, a postdoctoral researcher at the Cornell Lab of Ornithology shared some avian possibilities. “Birds that rely on daylight for foraging might cease their activity, and return to their roosts, while nocturnal or crepuscular (twilight-active) birds might accidentally commence their foraging," Pesendorfer wrote in an email. “One might see raptors take advantage of the changing conditions and nail confused prey. Had it been spring, people might have noticed a dusk and dawn chorus develop, but alas, it's mid-summer.” The eclipse’s path of totality will start in the northwest corner of Oregon and travel diagonally to South Carolina. See when and how much of the eclipse you’ll experience here. If you don’t happen to be along the path of totality, you can still contribute. “All observations will be GPS tagged. So we will be able to cross reference observed responses with maps of coverage,” said Ricard. “Depending on how many observations we get, we could start to understand how sensitive life is to an eclipse. Do you need to be within 95% of the path? Is 85% enough? These data would begin to answer such questions.” Understandably, it will be hard to take your attention away from what is happening in the sky, so individuals are encouraged to make their observations within 5 minutes of either the onset and completion of the eclipse. And while you are enjoying the eclipse, remember, never look directly at the sun unless you are wearing special eye protection. Regular sunglasses don’t count.

The Nashville Zoo will be participating in Life Responds recording if captive animals display any eclipse-related behavior. Credit: KleeKarl, CCO public domain Educators interested in getting their students involved can find free webinars and material resources at the project’s website. In addition California Academy of Sciences will be hosting two virtual seminars for students in August. The first will get them prepped for observing the eclipse. The second will let students share observations. There are also free webinars and lists of simple tools and materials for observing the eclipse for teachers. “We are really excited to have people experiencing their environment,” said Ricard. “We hope this project will encourage people’s sense of unity with the world around them, because this is not just something we humans are seeing but other life is reacting and noticing.” While you are outside, consider contributing to the Eclipse Megamovie as well, which is training volunteers to photograph the eclipse. Or, join one of the many official NASA viewing events across the country.