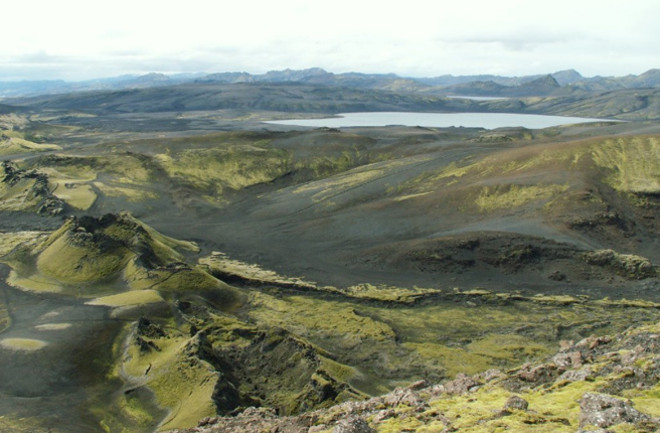 Part of the Laki fissure system in Iceland that erupted from June 1783 until February 1784 in one of the largest eruptions in recorded history. Image: Ulrich Latzenhofer / Fotopedia. Saturday marks the 230th anniversary of the famed Laki (or Skaftár Fires) eruption in Iceland -- one of the largest volcanic eruptions in recorded history. It wasn't a enormous explosion like many people associate with giant eruptions, nothing like Tambora or Krakatau. However, it did have a profound impact on people living around the entire Northern Hemisphere for years afterwards, although the direct impact the eruption had on the Earth's climate is still a widely debated and researched topic. In honor of this anniversary, I thought I'd try to give a brief primer on the eruption and why it is such an important eruption, both in terms of Icelandic volcanism and its global impact.

Map of the 1783-4 Laki eruption fissures and flows. Image: Thordarsson and Self (1993) The Laki eruption wasn't really a single event, but rather 8 months' worth of lava flows and explosions that ejected an astounding ~14.7 km^3 of basaltic lava that came out of 140 vents along a 23-km-long set of fissures and cones (see right and above). This is by far the largest basaltic eruption in recorded historyUPDATE: Nope, I forgot that Iceland had an even bigger basaltic eruption in 934 AD - the Eldgjá eruption that produced almost 20 km^3 of lava! That volume might be hard to visualize, but 14.7 km^3 would pave the entire city of Boston (~232 km^2) in ~63 meters deep of basalt. Think of it another way: Kilauea, one of the most active volcanoes on Earth, as erupted ~4 km^3 of basalt since 1983. That means that Laki erupted 3.6 times more lava in 8 months than Kilauea as erupted in 30 years. That is pretty remarkable! This doesn't even take into account that while the Laki eruptions were occurring, nearby Grímvötn was also erupting, possibly as many as 8 times between May 1783 and May 1785. These two events are thought to be related in a single "volcanic-tectonic episode" that fed magma into the Laki fissures and Grímvötn. Like most volcanic eruptions, the Skaftár Fires (as they are known in Iceland) started with a series of earthquakes first noticed 3-4 weeks before the eruption started on June 8. Now, likely there were many smaller and deeper earthquakes that preceded the earthquakes that were felt at the surface, but in the late 1700s, there was no such thing as seismometers to measure those smaller earthquakes. Today, Iceland is wired with seismometers as to detect these intrusions likely long before any eruption might occur and if the eruption of Eyjafjallajökull is any indication, these earthquakes could start months to years in advance of an eruption. However, in 1783, only earthquakes that were felt could be noticed -- and by May 29, they could be felt strongly in towns 50 km from the eventual eruption site. Once the eruption began, each pulse of the eruption followed a similar sequence: earthquakes, new fissure, short explosive eruption (phreatomagmatic as lava interacted with the water table), violent strombolian/subplinian explosions then Hawaiian eruptions (lava flows). Some of the explosive components of the eruption produced plumes that reached 15 km (~50,000 feet) while lava fountains were 800-1400 meters tall. Once the lava flows started to flow from a new fissure (usually within days of the fissure opening), some of the rates of eruption were remarkably high, up to ~8,600 m^3/s. That is close to the average discharge of the Ohio River, but in basaltic lava form. This is why the Laki eruptions are considered close to a mini flood basalt eruption with such high rates of eruption. Most of the lava flows (90%) erupted in the first 5 months. In fact, more than half of the lava erupted did so in the first 48 days of the Laki eruptions. The eruption likely occurred as a series of "surges" of lava, where 1-2.5 km^3 lava flows erupted in a matter of days and flowed down the river channels as much as 35 km in 1-2 days -- that means these flows were moving at a healthy rate of 15-17 km/day (fast for a basaltic lava flow). These surges help define 10 episodes of eruptions during the 8 months that the Laki vents were active -- if you want to read the whole detailed story, be sure the check of the classic paper by Thordarsson and Self (1993) on the Laki eruption. Now, the Laki eruptions had a staggering effect on Iceland itself, in large part due to the volcanic gases released in the eruption and not the lava flows themselves. Sulfur dioxide released by the lava flows stayed close to the ground (within 5 km) in Iceland, creating acid rains that were strong enough to burn holes in leaves, kill trees and shrubs and irritate skin. The eruption released 8 Mt of fluorine, so as that fluorine settled out and was incorporated into grasses, grazing livestock got fluorinosis. Sixty percent of all grazing livestock died due to the effects of the Laki eruptions. The "Haze Famine" as it is called in Iceland killed over 10,000 people (~22% of the population) from famine and disease.

Distribution of the 1783-4 Laki haze across the northern hemisphere. Image: Thordarsson and Self (2003) Of the 122 Mt of sulfur dioxide released in the eruption, 95 Mt made it to the upper troposphere and lower stratosphere, so it entered the jet stream and was circulated around the entire northern hemisphere (see right). The haze quickly reached Europe and by July 1, 1783, the haze was noticed in China. There are not many historical records from North America that mention the arrival of the Laki haze, but tree ring records from northern Alaska suggest that July and August 1783 were very cold. The mean temperature in northern Alaska is 11.3ºC, but the mean temperature recorded in May-August 1783 was only 7.2ºC. Russian traders in Alaska noted a population decrease in the years after the eruption while Inuit oral histories do refer to a "Summer that did not come" that could correlate with the Laki eruption as well. Globally, those 95 Mt of sulfuric dioxide reacted with atmospheric water to form 200 Mt of sulfuric acid aerosols. Almost 90% of that sulfuric acid was removed in the form of acid rain or fogs, while 10% stayed aloft for over a year. This might explain why northern hemisphere temperatures were 1.3ºC below normal for 2-3 years after the eruption. Thordarson and Self (2003) created an excellent figure to show how the sulfur aerosols were dispersed during the eruption (see below), where 80% was part of the explosive phase of the eruption and launched 10-15 km, producing distant haze across the world while 20% came directly from cooling lava flows, so it stayed close to the ground to produce the local haze in Iceland. The sulfuric acid was even damaging to crops in Europe, where noxious dews and frosts (sulfur precipitates) formed. Ash from the eruption was noted as far away as Venice, Italy and many places in between.

Model from Thordarsson and Self (2003) showing the high and low altitude dispersal of sulfur dioxide from the 1783-4 Laki eruption. Image: Thordarsson and Self (2003) It is hard to overemphasize the magnitude of the Laki / Skaftár Fires eruption -- both in terms of the amount of lava erupted and the impact in had on Iceland and elsewhere. Imagining what the impact would be if such an eruption happened today is hard, but we would expect a few years of colder weather and potentially a dramatic impact on air travel throughout the northern hemisphere, not to mention potential crop failures due to acid rains in Europe and Russia. The impact of the eruption on trees in Alaska shows just how global the impact is for these colossal eruptions that release hundreds of millions of tons of volcanic aerosols. One hope is that modern volcano monitoring techniques can give us some warnings -- maybe months -- before such an event begins, but even then it would be hard to escape the consequences of such an eruption. References