Deep in the outer realms of our solar system, well over a billion kilometers away, something bizarre happened at Saturn's F ring. I mean, seriously: what the hell happened here? 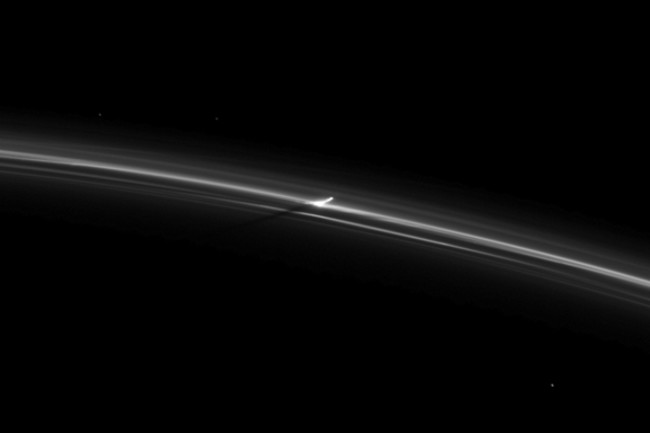 This is one of the latest pictures returned from the remarkable human achievement that is the Cassini spacecraft, a probe the size of a school bus that has been orbiting the ringed planet since 2004. It's returned one incredible picture after another, and lately -- as Saturn's orbit has brought it to a point where the rings are nearly edge-on to the Sun -- things have gotten not only spectacular but also really weird. The rings are incredibly thin, only a few meters in thickness despite being hundreds of thousands of kilometers across. Over the past few months, as the Sun shines almost straight into the rings (instead of down on them), every bump and irregularity sticks out like, well, like a tree in the desert. Weird gravitational effects from Saturn's fleet of moons tune and resonate the countless particles making up the rings, creating beautiful waves and ripples. But this, this is something new. 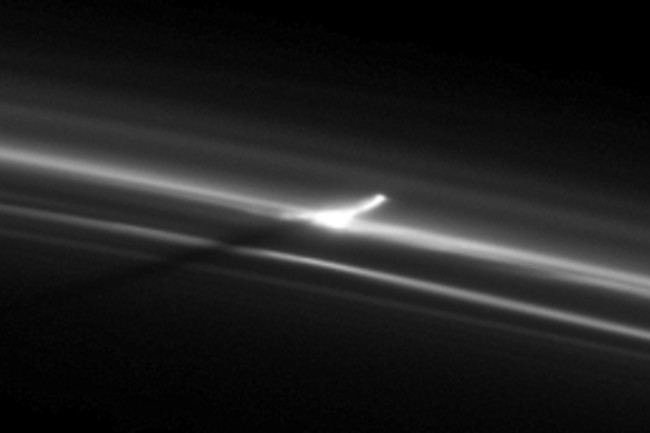 It's not exactly clear what's going on here, even in this slightly zoomed shot. But it looks for all the world - or worlds -- like some small object on an inclined orbit has punched through Saturn's narrow F ring, bursting out from underneath, and dragging behind it a wake of particles from the rings. The upward-angled structure is definitely real, as witnessed by the shadow it's casting on the ring material to the lower left. And what's with the bright patch right where this object seems to have slammed in the rings? Did it shatter millions of icy particles, revealing their shinier interior material, making them brighter? Clearly, something awesome and amazing happened here. My first inclination (haha! Inclination! As always, I slay me) is to say that there isn't enough material in the rings to create what amounts to a hydrodynamic wake behind a moving object. When you move through air you leave a wake behind you, but there are gazillions of particles per cubic centimeter in the Earth's air at sea level. I would think that even in Saturn's ring, the density of particles wouldn't be enough to support a phenomenon like this. But apparently, I'm wrong. Without doing a full-blown hydrodynamic calculation it's hard to say what's possible and what isn't. Cassini scientists are currently doing just that, in order to better understand what this odd image is trying to tell us. And I have to wonder: is this a common occurrence? Is this object on an orbit that intersects the rings so that it plunges up through them and then again down into them every time it circles Saturn? If so, how does that affect the rings overall, especially over millions of years? Or was this a singular event, some small object whose orbit was affected by a nearby massive moon, changing its path, putting it on a collision course with Saturn's mighty and vast ring system? That seems awfully unlikely... ... but when it comes to this weird, weird place, I've learned my intuition is monumentally inadequate. Nature, it turns out, has a far greater imagination than any mere human. We are fated, I think, to watch Nature unfold before us and try to figure it out after the fact. But oh, isn't that the joy of science?