Life on Earth May Have Been Made Possible by an Ancient, Violent Collision 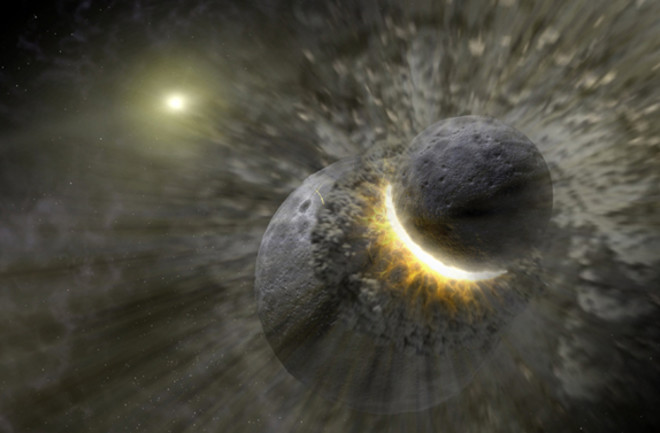 This artistic visualization shows a planetary collision near the star Vega. One new study suggests that the Earth obtained the elements that sparked life from a collision between the proto-Earth and a Mars-sized body that also created the moon. (Credit: NASA)

Did the violent, cosmic collision that created the moon make life on Earth possible? One new study suggests so.

There are a number of theories for how life originated on Earth, many of which try to explain how our planet got the ingredients for life: elements like carbon and nitrogen.

Previously, scientists have suggested that meteorites delivered life-giving elements to Earth. While the isotopic signatures of these elements on Earth match up with these objects, the ratio of carbon to nitrogen isn’t quite right. While the meteorites thought to have delivered elements crucial to life to Earth (known as carbonaceous chondrites) have 20 parts carbon for each part nitrogen, that ratio is about 40-1 on Earth.

Instead, these crucial elements may have been delivered in a staggering collision, says a group of petrologists at Rice University. Scientists know that a long-ago collision between the proto-Earth and a Mars-sized object created the moon — that same impactor may have also given us the elements for sparking life, they say.

To come to this conclusion, the research team created a simulation of the event based on a series of experiments that tested the behavior of carbon, nitrogen, and sulfur during the process of core formation on a rocky planet. The team then simulated the high pressures and temperatures during core formation and estimated how much carbon or nitrogen might be in a Mars-sized planet with a sulfur-rich core. They ended up with a geochemical simulation that accurately modeled observations of carbon, nitrogen and sulfur on Earth.

With their simulation, along with the known ratios and concentrations of elements on Earth, the team found that instead of a rain of meteorites delivering crucial elements, a more likely explanation is that they came all at once.

“Our simulation results suggested that the most probable scenario of the origin of carbon, nitrogen, and sulfur on the silicate portion of Earth is where these elements are brought by a Mars-sized (8-10 percent by mass of the present-day Earth) planet merging with the proto-Earth,” says Rajdeep Dasgupta, co-author of the paper in an email. Additionally, such a planet would probably have had a core rich in sulfur.

The work doesn’t solve the question of how life originated on Earth, but it does begin to answer the question of how the ingredients for life might have gotten here. “There are many unanswered questions about how life truly originated. Our study, however, provides a mechanism to bring the raw materials needed for life’s recipe,” Dasgupta said.

This work is published in the journal Science Advances.